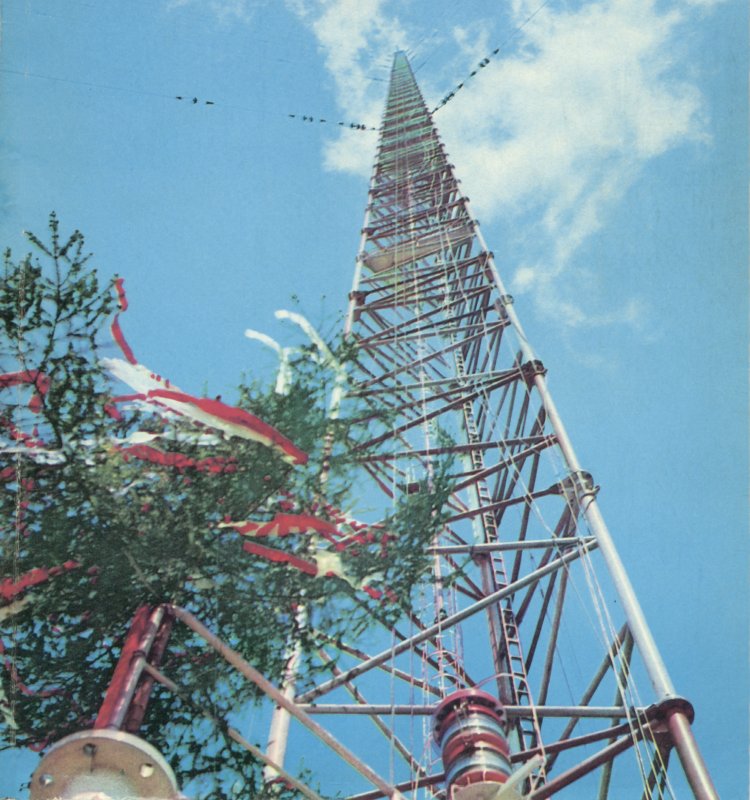 The Warsaw radio mast was the world's tallest structure until its collapse on , .

The mast, which was designed by Jan Polak, was convert|646.38|m|ft|2 tall. Its construction started in , was completed on , and its transmitter entered regular service on that year. It was located in Konstantynów, , , and was used by Warsaw Radio-Television (Centrum Radiowo-Telewizyjne) for radio broadcasting on a frequency of 227 kHz before and 225 kHz afterwards. Because a voltage potential of 120 kV existed between the mast and ground, it stood on a 2-metre-high insulator. It operated as a (), so its height was chosen in order to function as a half-wavelength antenna at its broadcasting frequency. The signals from its 2 transmitters could be received across all of , and as far way as . Its weight is debated: 380 , 420 tonnes, 550 tonnes and even 660 tonnes have been cited, probably the result of inaccurate unit conversions by translators. Polish sources claim 420 metric tonnes.

The Warsaw radio mast was a guyed steel lattice mast of equilateral triangular cross section, with a face width of 4.8 m. The vertical steel tubes forming the vertices of the mast had a of 245 millimetres; the thickness of the walls of these tubes varied between 8 and 34 millimetres depending on height. The mast consisted of 86 elements, each of which had a length of 7.5 metres. The mast had 3 arrays of guy wires, each attached to the mast at 5 levels. Each guy was fixed on a separate anchor block at the ground and was 50 mm in diameter. To prevent the s from interfering with the radio transmissions, the guys were insulated at regular intervals. The weight of guys and insulators used to anchor the mast was 80 s. An elevator and separate protected ladders were installed in the interior of the mast to facilitate access to the various mast components, including the . The elevator had a maximum speed of 0.35 m/s and required 30 minutes for a trip from the bottom of the structure to the top.

In the lower half of the mast, there was a vertical steel tube, attached to the mast's outer structure with large insulators. This tube was grounded at the bottom, and connected electrically to the mast structure at half the total height. This technique works by applying a DC ground at a point of minimum radiofrequency voltage, conducting static charge to ground without diminishing the radio energy. Static electrical charge can build up to high values, even at times of no thunderstorm activity, when such tall structures are insulated from ground. Use of this technique provides a certain amount of lightning protection.

A special overhead radio frequency transmission line was used to transfer the signal from the transmitter building to the mast. The transmitter building had a volume of 17,000 cubic metres and was approximately 600 metres from the mast. The transmitter consisted of two 1000 kilowatt units built by Brown Boveri and Cie. An was used to generate the transmission frequency in order to provide a very accurate, stable signal source which could be used as a frequency standard by anyone within signal range. The station, which had an area of 65 hectares, also contained a 76 metre tall lattice tower of rectangular cross-section. This tower was used to provide a radio link for programme feeds from the studio.

Small towers were erected around the periphery of the station's grounds in order to support aircraft warning lamps where the guy ropes were located. For photo see: [http://images3.fotosik.pl/181/c8283eb1c5d9099f.jpg]

Approximately ten years after completion of the mast, inspections revealed structural damage caused by wind-induced oscillations at the mast, the backstage insulators and the guys. Repair work was very difficult and replacement of the mast by a stronger construction of the same height was considered. However, this was not realized, as a result of Poland's economic situation. In 1988 the mast was repainted, but this could not be done to the desired extent, as there was not enough paint available.

On at 16:00 GMT the mast collapsed due to an error in exchanging the guys on the highest stock of the mast. The mast first bent and then snapped at roughly half its height. A small mobile crane, property of Mostostal Zabrze, was destroyed in the collapse. The and the (including the transmitter devices in it) were not damaged.

An investigating committee determined that blame lay with Mostostal Zabrze, which built and maintained the mast. The construction coordinator and the chief of the Mostostal division that built the mast were accused of causing the collapse. The former was sentenced to 2.5 years in , the latter to 2 years.

Since the collapse of the Warsaw radio mast, the tallest structure in Poland has been the FM radio and TV transmission mast at Olsztyn-Pieczewo measuring 360 metres (coordinates: coord|53|45|13|N|20|30|57|E|).

After the collapse, the outside , USA, regained its title as the world's tallest structure, standing 628.8 m (2,063 feet) until the unofficially exceeded this height in April .

After the collapse of the radio mast at Konstantynów, the Polish broadcasting company used the old Raszyn transmitter with its 335-metre-high mast near , which had been used since 1978 for daytime transmissions of a second Polish broadcasting service programme in the longwave range on the frequency 198 kHz, for transmissions on 225 kHz with a power of 500 kilowatts. It is not possible to transmit from Raszyn on 198 kHz and 225 kHz simultaneously, so the transmissions on the second longwave frequency 198 kHz had to be discontinued until either a second longwave broadcasting transmitting facility was built in Poland or a special frequency switch, which would allow transmissions on both frequencies, was installed at the Raszyn transmitter. The latter, simpler solution would have decreased the effectiveness and reliability of both transmitters and was therefore found unacceptable.

Because the Polish longwave transmitters are of special importance to Polish people abroad, as early as April 1992 the Polish government planned to rebuild the mast at Konstantynów. In September 1995 the Polish government was set to rebuild the mast. Although refurbishment of the old basements, which could be reused, had already started, the rebuilding of the mast was cancelled due to protests by local residents, who claimed that radiation from the mast was a health hazard. While the accuracy of these claims has not been verified, a new site for the transmitter was sought. Several other locations were considered, but due to the continuing resistance of nearby inhabitants (backed by the ), the height of mast designs mast and transmitter range were both highly reduced, and an old military site just southeast of Solec Kujawski was chosen. There, a new longwave transmission facility was built from 1998 to 1999 with a transmitter of 1200 kW output power for the frequency 225 kHz. This facility, which was inaugurated on , , uses two 289-metre-high grounded upfeed masts 330 metres apart as aerials.

Except for the mast and the radio frequency transmission line that led to it, nearly all components of the facility remain in place, unused and slowly deteriorating.

There are several plans to transform the former transmitter building into a technical museum. In spite of the great historic importance of the site, there is no support for this idea from officials.