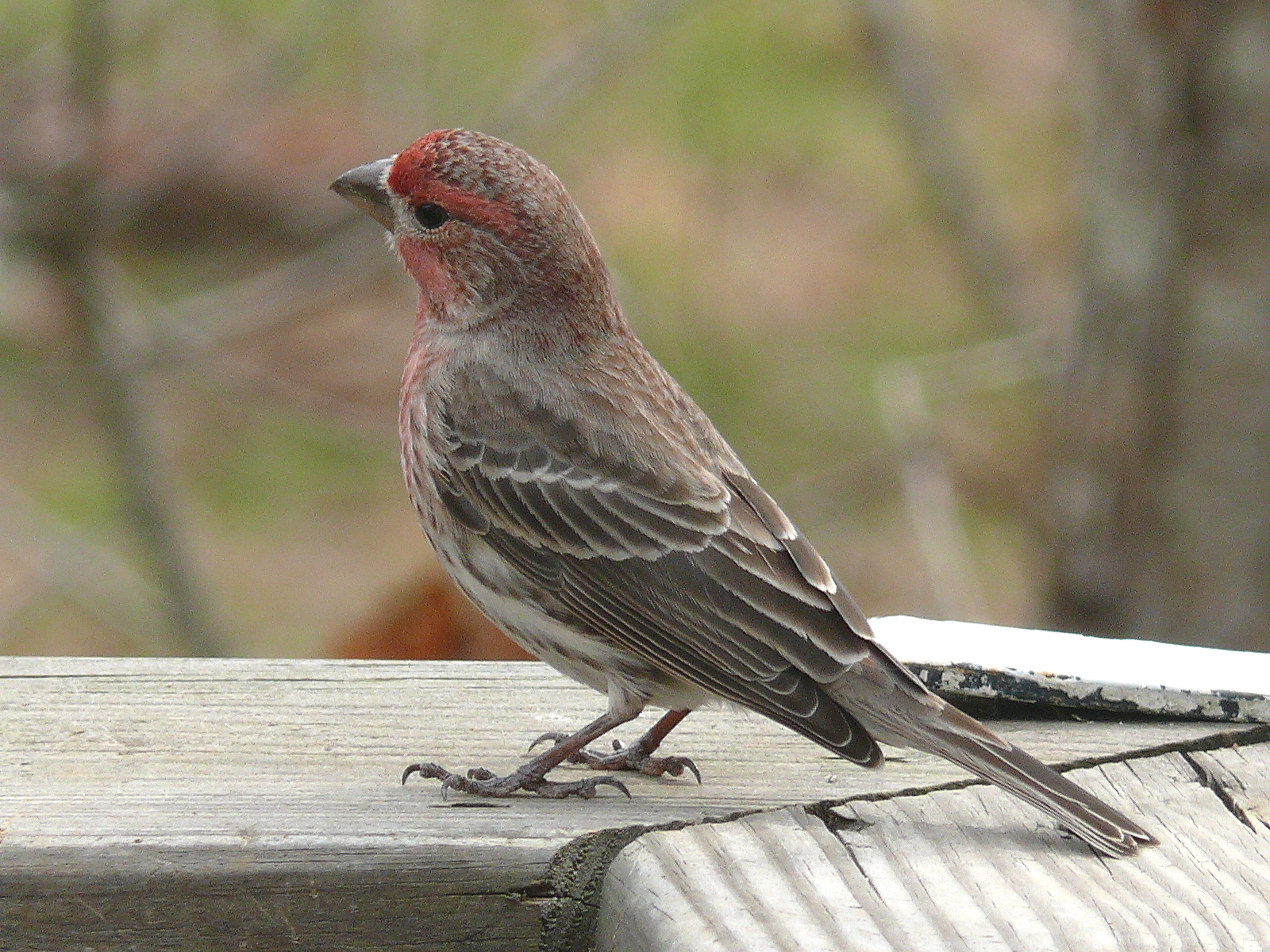 The House Finch ("Carpodacus mexicanus") is a medium-sized of the genus.

Adults have a long, square-tipped brown tail and are a brown or dull-brown color across the back with some shading into deep gray on the wing feathers. Breast and belly feathers may be streaked; the flanks usually are. In most cases, adult males' heads, necks and shoulders are reddish.

Their song is a rapid, cheery warble or a variety of chirps. [ [http://www.mbr-pwrc.usgs.gov/Infocenter/Song/h5190so.mp3 House finch "Carpodacus mexicanus"] ]

Originally only a resident of Mexico and the southwestern , they were introduced to eastern North America in the 1940s. The birds were sold illegally in New York

House Finches forage on the ground or in vegetation. They primarily eat grains, seeds and berries, being voracious consumers of weed seeds such as and ; included are incidental small insects such as s. They are frequent visitors to feeders throughout the year, particularly if stocked with or nyjer seed, and will congregate at hanging nyjer sock feeders. The House Finch is known to damage orchard fruit and consume commercially grown grain, but is generally not considered a significant pest, rather an annoyance. [cite web | url=http://fwp.mt.gov/fieldguide/detail_ABPBY04040.aspx |title=House finch detailed information | author=Montana state government |accessdate=2007-08-14]

Nests are made in cavities, including openings in buildings, hanging plants, and other cup shaped outdoor decorations. Sometimes nests abandoned by other birds are used. Nests may be re-used for subsequent broods or in following years. The nest is built by the female, sometimes in as little as two days. It is well made of twigs and debris, forming a cup shape, usually 1.8 m to 2.7 m (6 to 9 ft) above the ground.

During courtship, the male will touch bills with the female. He may then present the female with choice bits of food and, if she imitates the posture of a hungry chick, actually feed her. The male also feeds the female during the breeding and incubation of both eggs and young.

The female lays clutches of eggs from February through August, two or more broods per year with 2 to 6 eggs per brood, most commonly 4 or 5. The actual egg laying usually takes place in the morning, at the rate of one egg per day. The eggs are a pale bluish green with few black spots and a smooth, somewhat glossy surface. In response to mite infestation the mother finch may lay one gender of egg first, which increases the chances of the young finches survival.

House Finches are one of the few birds that are aggressive enough to keep out of their birdhouse and evict them.Fact|date=April 2008

The "" is often found on house finch nestlings, particularly for nests later in the season.

The , a , will lay its eggs in house finch nests, although the diet house finches feed their young is inadequate for the young cowbirds, which rarely survive.