County borough is a term introduced in 1889 in the United Kingdom of Great Britain and Ireland (excluding Scotland), to refer to a borough or a city independent of county council control. They were abolished by the Local Government Act 1972 in England and Wales, but continue in use for lieutenancy and shrievalty in Northern Ireland. In the Republic of Ireland they remain in existence but have been renamed cities under the provisions of the Local Government Act 2001.[1] The Local Government (Wales) Act 1994 re-introduced the term for certain "principal areas" in Wales. Scotland did not have county boroughs but instead counties of cities. These were abolished on 16 May 1975. All four Scottish cities of the time — Aberdeen, Dundee, Edinburgh, and Glasgow — were included in this category. There was an additional category of large burgh in the Scottish system, which were responsible for all services apart from police, education and fire.

When county councils were first created in 1889, it was decided that to let them have authority over large towns or cities would be impractical, and so any large incorporated place would have the right to be a county borough, and thus independent from the administrative county it would otherwise come under. Some cities and towns were already independent counties corporate, and most were to become county boroughs. Originally ten county boroughs were proposed; Bristol, Hull, Newcastle upon Tyne and Nottingham, which were already counties, and Birmingham, Bradford, Leeds, Liverpool, Manchester, and Sheffield, which were not. The Local Government Act 1888 as eventually passed required a population of over 50,000 except in the case of existing counties corporate.[2] This resulted in 61 county boroughs in England and two in Wales. Several exceptions were allowed, mainly for historic towns: Bath, Dudley and Oxford were all under the 50,000 limit in the 1901 census. Some of the smaller counties corporate—Berwick upon Tweed, Lichfield, Lincoln, Poole, Carmarthen and Haverfordwest—did not become county boroughs, although Canterbury, with a population under 25,000, did.

County boroughs to be constituted in this era were a mixed bag, including some towns that would continue to expand such as Bournemouth and Southend-on-Sea. Other towns such as Burton upon Trent and Dewsbury were not to increase in population much past 50,000. 1913 saw the attempts of Luton and Cambridge to gain county borough status defeated in the House of Commons, despite the approval of the Local Government Board — the removal of Cambridge from Cambridgeshire would have reduced the income of Cambridgeshire County Council by over half.

The viability of the county borough of Merthyr Tydfil came into question in the 1930s. Due to a decline in the heavy industries of the town, by 1932 more than half the male population was unemployed, resulting in very high municipal rates in order to make public assistance payments. At the same time the population of the borough was lower than when it had been created in 1908.[3] A royal commission was appointed in May 1935 to "investigate whether the existing status of Merthyr Tydfil as a county borough should be continued, and if not, what other arrangements should be made".[4] The commission reported the following November, and recommended that Merthyr should revert to the status of a non-county borough, and that public assistance should be taken over by central government. In the event county borough status was retained by the town, with the chairman of the Welsh Board of Health appointed as administrative adviser in 1936.[5]

The county boroughs of East Ham, West Ham and Croydon were abolished in 1965 with the creation of Greater London and went on to form parts of London boroughs. The remaining county boroughs were abolished in 1974 under the Local Government Act 1972, and replaced with non-metropolitan districts and metropolitan districts, all beneath county councils in a two-tier structure. In Greater London and the metropolitan counties the lower tier districts retained a wider range of powers than in the non-metropolitan counties.

This situation did not persist long. In 1986 the metropolitan county councils and the GLC were abolished, returning the boroughs to a county borough status, sharing some powers (police and transport for example). In the 1990s most of the old county boroughs were reformed again as unitary authorities — essentially the same as a county borough. In England, most of those former county boroughs that did not gain unitary authority status — Barrow-in-Furness, Burnley, Canterbury, Carlisle, Chester, Eastbourne, Exeter, Gloucester, Hastings, Ipswich, Lincoln, Northampton, Norwich, Oxford, Preston, Worcester, and Yarmouth — have given their names to non-unitary local government districts (in some cases coterminous with the old county borough, in other cases much larger). Burton upon Trent became an unparished area in the East Staffordshire borough, and has now been divided into several parishes.

For all practical purposes, county boroughs are exactly the same as the other principal areas of Wales called "counties" (including "cities and counties") as all these areas are run by unitary authorities (i.e.: have the functions of both boroughs and counties). 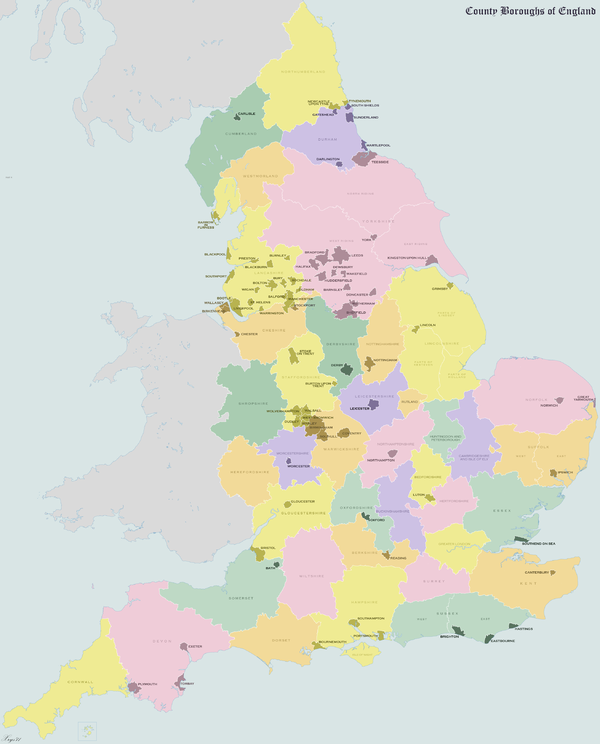 This table shows those county boroughs that existed in England and Wales between the Local Government Acts of 1888 (that created them) and 1972 (that abolished them from 1974).

County boroughs to be abolished prior to 1974 were:

The county boroughs of Belfast and Londonderry were created by the Local Government (Ireland) Act 1898.

In Northern Ireland, local government has not used county boroughs since 1973, but they remain in use for Lieutenancy.

For administrative purposes the two county boroughs in Northern Ireland were replaced with two larger districts (Belfast and Derry).

Galway became a county borough in 1986.

In the Republic of Ireland, the relevant legislation remained in force (although amended), and county boroughs on the original model existed until 2001. Under the Local Government Act 2001 (which replaced most existing local government legislation in Ireland), the term "County Borough" was abolished and replaced with "City" (and hence, "Corporation" with "City Council"). However Kilkenny, while a city, is instead administered as a town (and part of the county council area) for local government purposes. It is allowed to use the title "Borough Council" instead of "Town Council" however.