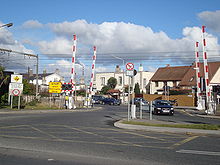 The area called Merrion Gates, in Sandymount, Dublin 4, is roughly where the northbound Dublin DART line goes inland before the station at Sydney Parade, which lies to the north. Booterstown DART station is the nearest to the south. The lands of the School for the Visually Impaired are here. There were gates on the road here once, separating Dublin from the coastal territory to the south.[citation needed]

Nowadays, it is the border between Dublin City and the borough of Dun Laoghaire that crosses the Rock Road at Booterstown Marsh or Bird Sanctuary.

In December 2009 a truck driven over the level crossing damaged the overhead electric wires for the DART when the crane on the truck hit the wires.[1][2]

There is access on foot to Sandymount Strand just to the east of the railway crossing. 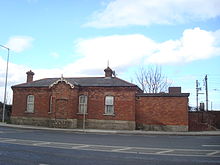