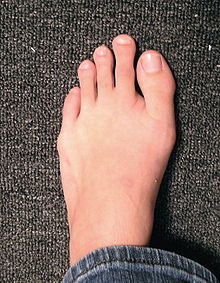 Photo of an extreme example of Morton's toe

The name derives from American orthopedic surgeon Dudley Joy Morton (1884–1960), who originally described it as part of Morton's triad (a.k.a Morton's syndrome or Morton's foot syndrome): a congenital short first metatarsal bone, a hypermobile first metatarsal segment, and calluses under the second and third metatarsals.

Although commonly described as a disorder, it is sufficiently common to be considered a normal variant of foot shape (its prevalence varies with different populations). The main symptom experienced due to Morton's toe is discomfort and callusing of the second metatarsal head. This is because the first metatarsal head would normally bear the majority of a person's body weight during the propulsive phases of gait, but these forces are transferred to the second (smaller) metatarsal head because of its anterior positioning. In shoe-wearing cultures it can be problematic: for instance, in causing nail problems from wearing shoes with a profile that doesn't accommodate the longer second toe.

Confusion has arisen from the term also sometimes being used for a different condition, Morton's neuroma, a term coined by Thomas George Morton (1835–1903) for a syndrome involving pain caused by neuroma between the third and fourth toes.

It has a long association with disputed anthropological and ethnic interpretations. Morton called it Metatarsus atavicus, considering it an atavism recalling prehuman grasping toes. In statuary and shoe fitting it has been called the Greek foot (as opposed to the Egyptian foot, where the great toe is longer). A longer second toe has often been associated with royalty, particularly during the rule of the Ptolemaic dynasty when Egypt was under Greek rulership. It was an idealized form in Greek sculpture, and this persisted as an aesthetic standard through Roman and Renaissance periods and later (the Statue of Liberty has toes of this proportion). There are also associations found within Celtic groups. The French call it commonly pied grec (just as the Italians call it piede greco), but sometimes pied ancestral or pied de Néanderthal[2].

A functionally shortened toe behaves just like a structural short leg, unbalancing the pelvis by dropping one hip lower. This can cause various degrees of scoliosis (improper lateral curves of the spine). The internally rotated leg causes a forward rotation of the pelvis, typically more on the side where the foot hyperpronates the most. The forward rotation of the hips causes changes in the kyphotic (anterior/posterior) curves of the spine and in general causes a forward-leaning, head-forward posture. The compromised posture combined with the torques created by internal leg rotation is often the cause of both joint and muscle pain ranging from knee and hip pain to low and general back pain and shoulder and neck pain. It is also believed by some to be associated with headaches and TMJ dysfunction, although this is not universally accepted.

Restoring the Morton’s toe to normal function with proprioceptive orthotics can help alleviate numerous problems of the feet such as Metatarsalgia, hammer toes, bunions, Morton's neuroma, Plantar Fasciitis, and general fatigue of the feet.