Cuvier's Gazelle (Gazella cuvieri) is a species of gazelle found in Algeria, Morocco, Tunisia. It is also known as the Edmi.[1] It is one of the darkest species of gazelle in coloring, due to its partial woodland habitat. It is sometimes placed in a separate genus, Trachelocele, from other gazelles, together with Goitered gazelles and Rhim Gazelles. It is very rare in wild with only 2000 individuals.

The Cuvier’s Gazelle is one of the darkest and smallest of the gazelle species, standing between −-129 centimetres (−0.295 ft) tall and an average weight of 35 kilograms (77 lb). It is characterized by its distinctive wide and dark band that run along the sides of the animal, which separates the brown dorsal parts from the white ventral parts. While both sexes have horns between 10 to 15 centimetres (3.9 to 5.9 in) long the male’s are more ribbed and have greater mass. Also they possess long, slender ears.[2]

The purpose of the dark bands that run parallel along the side of the animal is to aid in counter shading, having ventral body pelage that is more lightly colored that the dorsal surface. This is thought to reduce the shadows produced by the animal’s body. With the sun shining downward on the animal this will cause an unequal distribution of light disrupting the pattern created by its silhouette. The darker colors compared to other gazelles could be explained by its shadier habitats.

Threats - The early reason for decline of the gazelle was due to overhunting for skins, meat, and trophies. In the 1930s it was already considered one of the rarest gazelles but didn’t enter the endangered species list until the 1960s. Even though it is now unlawful to hunt this animal they still suffer from habitat stress due to local farmers destroying habitat for pastureland and competition from domestic sheep and goats.

Once thought to be extinct in the wild the gazelle’s population is now thought to be less than 2000 left in the world. Occupying small pockets of the Atlas Mountains. Many of the animals can be found on protected land in Tunisia but this isn’t the case in Morocco and Algeria where many of the animals are still being outcompeted for food from livestock. One of the most important refugees is Djebel Chambi National Park, which holds the largest population in Tunesia.

The Cuvier’s Gazelle inhabits the Atlas Mountains in Northwestern Africa.[3] It is found in many different types of landscapes. The preference is for sandy or stony hills and plateaus. Also they occupy areas of regenerating forests and lush pine forests. During the early parts of the morning and late parts of the evening they come out of the mountains to graze in the low grasslands. Then in the afternoon they will travel back up the mountain into the forests and find a cool place to spend the day.

Cuvier’s Gazelle tend to live in social groups around 3-4 in population, during mating season, but usually not larger than 8 members. Groups tend to only contain one male and up to three females with up to two offspring. During the mating season the dominant males will force the younger males out of the social group where they will regroup to forum bachelor groups. Then the females will leave the group to go give birth. After giving birth she will be recovered into the group with the young batchelors and live out the rest of the season like this until next mating season.

Their main defense is their alertness. When sensing something they don’t like they will set off an alert signal by flicking their tail and performing a strong gait, of jumping into the air and having all four hooves land on the ground at the same time. Along with their alertness they are also one of the fastest gazelles. Reaching and sustaining top speeds of over 50 mph.

With the gestation period lasting around 160 days the gazelles tend to breed in the winter and give birth in the early spring. Before giving birth the mother will separate herself from the heard to go give birth and then hide the newborn in the thick underbrush outside the heard returning occasionally to nurse it. This occurs for the first month until the newborn begins to eat vegetation but still relining on nourishment from its mother.

The Cuvier’s Gazelle is one of the few gazelle species frequently giving births to twins (40.5%) with singlets weighing in at an average 2.99 kilograms (6.59 lb) and twins weighing in at an average 2.85 kilograms (6.28 lb).[4] Ten days after giving births the females may breed again giving birth to two sets of offspring. New bourn females can become sexually mature as early as 27 weeks and can give birth to her first offspring as soon as 70 weeks of age.

The diet of a Cuvier’s Gazelle entirely contains leaves, grass, and other vegetation. They will consume massive amounts of greenery and find a cool place during the day to finish chewing their cud, a remnant of food that returns from the stomach to be chewed a second time for further digestion. 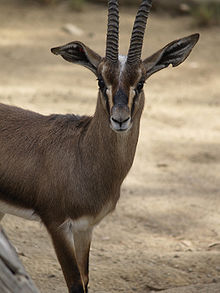