Mars, as seen through a small telescope, showing the patterns of colour known as albedo features.

The classical albedo features of Mars are the light and dark features that can be seen on the planet Mars through an Earth-based telescope. Before the age of space probes, several astronomers created maps of Mars on which they gave names to the features they could see. The most popular system of nomenclature was devised by Giovanni Schiaparelli, who used names from classical antiquity. Today, the improved understanding of Mars enabled by space probes has rendered many of the classical names obsolete for the purposes of cartography; however, some of the old names are still used to describe geographical features on the planet. 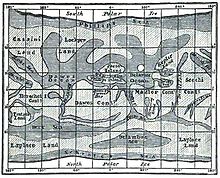 Richard A. Proctor's map of Mars, which names albedo features after astronomers

Early telescopic astronomers, observing Mars from a great distance through primitive instruments (though they were advanced for their day), were limited to studying albedo contrasts on the surface of the planet. These albedo contrasts rarely correspond to topographic features and in many cases obscure them. The origins of the albedo contrasts were a mystery. The lighter patches at the poles were correctly believed to be a frozen substance, either water or carbon dioxide, but the nature of the dark patches seen against the general reddish tint of Mars was uncertain for centuries. When Giovanni Schiaparelli began observing Mars in 1877, he believed that the darker features were seas, lakes, and swamps and named them in Latin accordingly (mare, lacus, palus, etc.). Within a few decades, however, most astronomers agreed that Mars lacks large bodies of surface water. The dark features were then thought by some to be indications of Martian vegetation, since they changed shape and intensity over the course of the Martian year. They are now known to be areas where the wind has swept away the surface dust, leaving a darker, rockier surface; their borders change in response to windstorms on the Martian surface that pick up the dust, widening or narrowing the features. 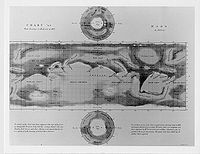 Nathaniel Green's Mars map, which uses many of Proctor's names

The first astronomer to give names to Martian albedo features was Richard A. Proctor, who created a map in 1867, based in part on the observations of William Rutter Dawes, in which several features were given the names of astronomers who had been involved in mapping Mars; in some cases, the same names were used for multiple features. He was followed by Giovanni Schiaparelli, whose observations differed from Proctor's, and who used this difference to justify drawing up an entirely new scheme of nomenclature in Latin, drawn from the myths and history of classical antiquity with a mixture of other sources. Proctor's names competed with the Schiaparellian names for several decades, and were used in notable early maps drawn by Camille Flammarion in 1876 and Nathaniel Green in 1877. The Proctorian names are now, however, regarded as totally obsolete. In 1958, the International Astronomical Union created a list of officially recognized Martian albedo features, including many, but not all of Schiaparelli's names.[1]

The advent of space probes has revolutionized the scientific understanding of Mars, and some of the classical albedo features have become obsolete as they do not correspond clearly with the detailed images provided by spacecraft. However, many of the names used for topographic features on Mars are still based on the classical nomenclature of the feature's location; for instance, the albedo feature 'Ascraeus Lacus' provides the basis of the name of the volcano Ascraeus Mons.

In addition, since most Earth-based amateur telescopes are not powerful enough to resolve the topographic surface features of Mars, amateur astronomers still use many of the old feature-names to orient and record their observations.

Several Latin words involved here are common nouns. These are generally, but not always, second in the name, but are usually ignored in alphabetizing below:

Not listed here are the "canals" also observed and named by Schiaparelli, for which see the article Martian canals.