The referenced n-gon in the name of the bipyramids is not an external face but an internal one, existing on the primary symmetry plane which connects the two pyramid halves.

The face-transitive bipyramids are the dual polyhedra of the uniform prisms and will generally have isosceles triangle faces.

A bipyramid can be projected on a sphere or globe as n equally spaced lines of longitude going from pole to pole, and bisected by a line around the equator.

The volume of a bipyramid is

where B is the area of the base and h the height from the base to the apex. This works for any location of the apex, provided that h is measured as the perpendicular distance from the plane which contains the base.

The volume of a bipyramid whose base is a regular n-sided polygon with side length s and whose height is h is therefore:

For example, a pentagrammic dipyramid is an isohedral star polyhedron composed of 10 intersecting isoceles triangles. It is the dual to the pentagrammic prism. 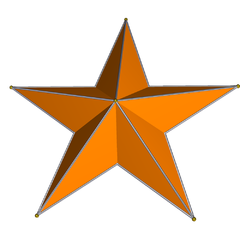 In general, a bipyramid can be seen as an n-polytope constructed with a (n-1)-polytope in a hyperplane with two points in opposite directions, equal distance perpendicular from the hyperplane. If the (n-1)-polytope is a regular polytope, it will have identical pyramids facets.