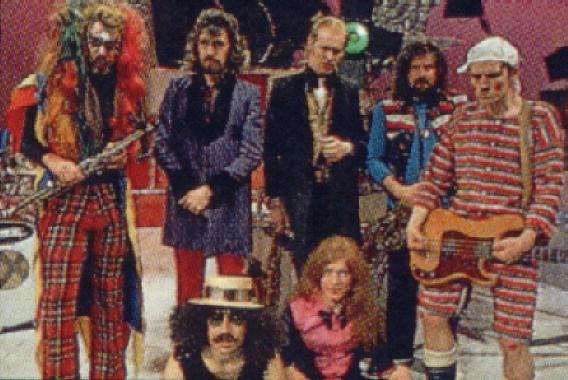 Wizzard were a -based band formed by , former member of and co-founder of .

Not long after the release of Electric Light Orchestra's first album, Wood found himself at odds with co-leader . He decided he wanted to head off in a different musical direction and left, taking band members Bill Hunt (keyboards & french horn), (cello), and ELO's sound engineer, Trevor Smith, with him, to found Wizzard. Also in the line-up were former Move bassist Rick Price, drummers Charlie Grima and Keith Smart, (all taken from Birmingham group Mongerel) and saxophone players Mike Burney and Nick Pentelow, son of actor Arthur Pentelow. Hunt was later replaced by Bob Brady.

The band made their live debut at a Rock 'N' Roll Festival at Wembley in August 1972, followed by an appearance at the later that month. With Wood's distinctive warpaint make-up and colourful costume, not to mention regular appearances on 's in which members and friends variously appeared in pantomime horses, gorilla costumes or as roller-skating angels, often wielding custard pies for good measure, they were one of the most picturesque groups in the British era. In January 1973 they scored their first Top 10 hit with "Ball Park Incident". Although they released two albums, "", and "", their biggest hit was with their second single. "", Wood's faithful and affectionate tribute to the "", made No. 1 in the for four weeks. The follow-up, "Angel Fingers", also topped the charts, though for only one week.

During 1973 Wood was simultaneously exploring a solo career with his Album "Boulders", which produced a Top 20 hit "Dear Elaine". The subsequent heavy working schedule and strain led to health problems, and several cancelled or postponed live dates on a spring 1974 tour of the UK. One highlight of 1974 was a return to the top 10 with "Rock 'N' Roll Winter", a song dedicated to girlfriend of the time , who repaid the honour by recording a Wizzard flavoured song "Ooh I Do" a few months later. A tour of the U.S. later that year failed to bring them any commercial success there, but some members guested on a session, which resulted in the eventual release of the latter group's single "It's OK" in 1976.

Wizzard were an expensive band to maintain, both because of the large line-up, in terms of recording costs, and Bill Hunt's capacity to smash the pianos of the venues they were playing at. According to Price in a radio interview, "...even when we've had permission to do so. At one gig they said, 'Oh, go on, smash it up; it's only worth a fiver.' So Bill smashed it up, and we got a bill for a hundred and ten quid!" Studio time was an even greater drain on the band's finances. Price again: "When we finished recording 'Angel Fingers' it was rumoured that we had spent more time in the studio than had with the whole of the "" album. Whether it was true or not, this meant that most of the record company's money was spent in studio time and that the members of the band had to rely on live touring work for their income. A couple of tours in the UK and one tour of the USA were not enough to ensure regular wages for the band. One by one the band members found other, more lucrative, things to occupy their time." [http://www.priceandlee.org/pricelee101_002.htm]

By autumn 1975 they had split, leaving a farewell single "Rattlesnake Roll", which failed to chart, plus a third album "Main Street" which their record company did not release as they deemed it too uncommercial. It finally saw the light of day in 2000. Wizzard had initially intended their second album to be a double, with one disc a set of pastiches, the other disc jazz-rock. The record company heard the rock'n'roll set, and said they intended to release that as a single album, which appeared in 1974 as "". "Main Street", which languished in the vaults for around 25 years and was for some time presumed lost, was the jazz-rock set.

In 1977 Wood and Price formed the shortlived , after which Wood reverted to a solo career in addition to producing records for other acts, notably a 1979 Top 10 cover version of "" for British doo-wop revivalists Darts.