Michael McDowell (born 1 May 1951) is a Senior Counsel in the Bar Council of Ireland and a former politician. [1]

McDowell led the Progressive Democrats to a disastrous performance in the 2007 general election, in which the party lost six of its eight seats in Dáil Éireann, including his own. After conceding his seat to John Gormley at the RDS count centre in Dublin, McDowell abruptly resigned as party leader and announced his immediate retirement from public life. He has since resumed his private legal career.

Life before election to the Dáil

Born in Dublin, he was educated at the Jesuit school Gonzaga College, then at University College Dublin where he became auditor of the UCD Law Society. He later attended the King's Inns in Dublin where he achieved the Barrister-at-Law degree in 1974. McDowell was a junior counsel on the legal team that defended the murderer Malcolm MacArthur in the notorious GUBU case. In 2002, McDowell excused himself from considering MacArthur's parole report, to avoid any possible conflict of interest arising from this representation.[2] He was appointed a Senior Counsel in 1987 when he was 35 years old. He became involved in politics, initially supporting Fine Gael. When Desmond O'Malley was expelled from Fianna Fáil in 1985, McDowell immediately wrote to him in support, and ended up becoming one of the people who helped him establish the Progressive Democrats. He is the husband of UCD accountancy Professor Niamh Brennan and brother of UCD economics lecturer Moore McDowell.

Career in the Dáil and Attorney General

McDowell was one of 14 Progressive Democrat TDs elected to Dáil Éireann at the 1987 general election, the first election after the party was founded.[3] He was elected for the Dublin South East constituency. He lost his seat at the 1989 general election but was made chairman of the party. McDowell regained his seat at the 1992 general election but lost it again at the 1997 general election. At various times, he served as a member of the Progressive Democrats front bench in roles as spokesman for foreign affairs, Northern Ireland and finance. In July 1999, McDowell was appointed Attorney General of Ireland,[4] a position he held until 2002. In 2000 he proposed changing the name of the party to the Radical Party.[5]

Following the 2002 general election, McDowell regained his Dáil seat. This was the first time McDowell combined winning a Dáil seat with his party's entry into government. He was appointed to the cabinet as Minister for Justice, Equality and Law Reform. He was a strong opponent of the policies of Sinn Féin and the Provisional Irish Republican Army, and often took a harder line than his coalition partners, Fianna Fáil. He was named as Politician of the Year for 2004 in the Magill magazine annual awards.[6]

As Justice Minister, McDowell attracted a good deal of controversy: 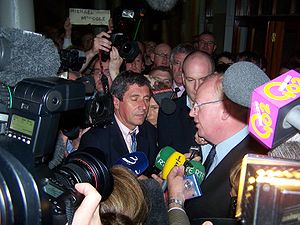 During the 2007 general election campaign, the Progressive Democrats erected posters bearing the slogan, "Left wing government? No thanks". This was an echo of their 2002 election campaign when they issued posters bearing the slogan; "One party government? No thanks" which then targeted Fianna Fáil. In 2007 their target was the Green Party. While McDowell was unveiling the poster during a press briefing in Ranelagh which was the site of his telegraph pole climb in the 2002 election; constituency opponent John Gormley of the Green party turned up to confront McDowell on the issue of an accompanying pamphlet which made misleading claims about the Green party. The ensuing exchange between them was dubbed the Rumble in Ranelagh by the media.[47][48] During the 2007 RTÉ Television election debate, McDowell remarked on the state of the opposition parties: "I'm surrounded by the left, the hard-left and the left-overs."[49]

Despite being a high profile party leader, Tánaiste and Minister for Justice, McDowell's vote dropped from 6,093 (18.8%) in the 2002 general election to 4,450 (13.2%) in the 2007 general election. He was beaten for the last seat in the Dublin South East constituency by John Gormley by a margin of 304 votes. He was the first sitting Tánaiste to lose his seat, and his subsequent departure from politics makes him the "shortest-serving political-party leader in the history of the State".[50] He stated that his time as a public representative was over.[51] On 25 May 2007, McDowell resigned as leader of the Progressive Democrats and announced that he was quitting politics, immediately and without consultation with his party colleagues, after losing his seat in the Dublin South-East constituency in the general election, while the party fell from eight seats to two. The then Minister for Enterprise, Trade and Employment Micheál Martin, said he was sad to learn of his cabinet colleague's decision to resign. He said he will be a significant loss, calling him a very formidable parliamentarian.[52]

The reaction of the press was divided:

That McDowell's career in government as Tánaiste is over is partly of his own making as he courted controversy to such a fevered extent that he became the most unpopular political leader in the country.[53]

McDowell's reforms of the prison service, the Gardaí and immigration policy are a monument to his five years as Minister for Justice. [54]

Since leaving politics he has returned to work as a Senior Counsel. Despite this, he receives additional annual pension payments of €60,388.[55]