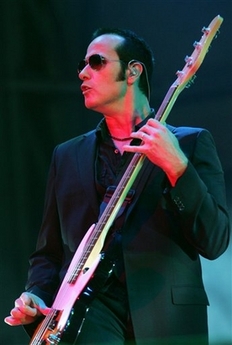 Robert Emile DeLeo (born , in ) is an American bass player and for the rock band . He has also played in Talk Show and . He is the younger brother of , who plays guitar for STP.

Robert met (who would eventually become lead singer of STP) at a Black Flag concert in Long Beach in 1987. They soon realized that they were both dating the same woman. After she moved to Texas, Weiland and Deleo moved into her San Diego apartment, where they tried to form a band. They eventually hooked up with drummer , and Robert managed to convince his brother Dean to play guitar in their new band. The band took the name Mighty Joe Young. They played many gigs around LA bars, and were eventually signed onto Atlantic Records in 1992. However, the name "Mighty Joe Young" had already been taken, so the band was forced to change their name to "Stone Temple Pilots" (which has no specific meaning, according to Weiland).

During their years, Stone Temple Pilots came to be one of the most successful bands of the 90's. Robert is credited with much of the band's music, including the famous intros for the songs "Plush" and "". Although sales of their records eclipsed over 30 million, the band disbanded due to Scott Weiland's continuous problems with drug abuse.

reunited in early 2008 and are currently on a 65-date tour of North America. When the tour concludes in November the band will record their sixth studio album.

While 's hiatus in 1997 due to Scott's bouts with the law, Robert, his brother Dean, and Kretz joined with singer of Ten Inch Men and formed Talk Show. Scott went into rehab and released a solo album during this time. Talk Show released their self titled and only record in 1997 with . Although largely a critical success, the album failed to chart and became a commercial flop. Dave Coutts was eventually fired and the band disbanded.

After STP's break up in 2003, Robert and Dean joined Filter frontman and drummer to form the group . The group met after Patrick contacted the DeLeos on writing material for Filter's fourth album. The band eventually called in Luzier in for an audition, found the formula worked, and the band was formed. The band's self titled album was released on November 14th, 2006. The album became a critical success; some went as far to label the album as one of the bests of the year. Robert summed up his sound on the album as follows;"“I kind of combined bass stuff with some guitar stuff to achieve my sound—I’ve really been going nuts on eBay! I’m still trying to achieve this one bass sound I keep hearing in my head—kind of taking [Motown legend] ’s feel and mixing that with ’s or ’s sound. So it’s a funky bottom, with a really aggressive top. The sound on this record is the closest I’ve gotten to that.”" [http://www.guitaronemag.com/archives/2006/11/army_of_anyone.html] However, Army of Anyone ended up going on an "indefinite hiatus" in 2007 after disappointing album sales and Richard Patrick's return to Filter.

Robert is known for his wide use of basses, although he makes considerable use of other basses during recording sessions. DeLeo is a former employee of Schecter Guitar Research and built the prototype of what later became his signature model while working there. The Schecter Model T was his primary live instrument during his years with STP. The bass features a 34" scale neck and Duncan pickups. Variants of this bass include a 5-string model, and several different pickup configurations. [http://news.harmony-central.com/Newp/2000/Schecter-Model-T.html]

In 's "Goodbye" video, he played a bass.

He is known for his smooth style of playing, with infusions of jazz, '60s rhythm and blues, and hard rock creating a rather distinctive tone. His primary influence is legendary bassist . Other influences include the late of the seminal rock band , Rocco Prestia of Tower of Power, and of Yes, and John Paul Jones of . Robert is known for being a master riff maker; he created most of the riffs for STP which was the band's trademark style, and wrote and arranged most of the band's songs. He also uses a bass to change his tone accordingly (a great example being the song "" by STP). He mostly uses Marshall and Fender amplification, but has been seen using vintage amps as well.

During the STP years, DeLeo used a wide variety of equipment; though he used the Schecter live, for recording purposes he used a wide variety of basses, and had a fondness for oddball off-brand basses from the 1960s, particularly short-scale hollowbody basses which he strung with flatwound strings.(Bass Player Magazine, November 2001 interview)

DeLeo's usual live rig while with STP consisted of an Alembic FX1 preamp, a QSC MX1500 poweramp, three Eden 2x12 cabinets and three Eden 4x10 cabinets. One 2x12 and one 4x10 cab were placed on either side of the drum riser, and the third stack was placed on DeLeo's side of the stage and kept in reserve as a backup. (Bass Player Magazine, November 2001 interview)

De Leo's usual studio rig for most of "Tiny Music...", all of "No. 4", and all of "" was more complicated; He split his signal, bi-amping it to a '67 50-watt Marshall Plexi guitar head with '69 Marshall keyboard 8x10 cabinet, and a '59 Fender Bassman amplifier with a custom 1x15 cabinet. This configuration, which DeLeo noted in a "Bass Player Magazine" article as being an idea he lifted from Chris Squire of Yes, allowed DeLeo to use distorted and clean sounds simultaneously and produce more workable sounds on tape by blending the signals to taste. ("Bass Player Magazine", November 2001 interview)

Among the basses DeLeo is known to have used are his Schecter Model T signature basses, a '66 Fender Precision bass with flatwound strings (e.g. ""), several shortscale hollowbody basses with flatwound strings ("Creep" is a Limgar, "" is an Orlando), and a'76 Rickenbacker 4001 (Art School Girl), '50s Danelectro Longhorn, an unknown type of upright bass ("") and Fender Musicmaster. Occasionally uses Sansamp BDDI for extra drive, and used an MXR phase 90 on "And So I Know" and an EHX Micro Synth on "Transmissions from a Lonely Room."("Bass Player Magazine", November 2001 interview)

*Is the younger brother of guitarist .
*His wife Kristen gave birth to a baby boy, Duke Vincent, on August 7th, 2005.
*He and his brother were producers on the album "", the second album by the band .
*Was invited to write for during their 1996 tour. His favorite record by Aerosmith is "Rocks". [http://www.stonetemplepilots.com/bio_robert3.html]
*Among the songs he has written, "Still Remains" from the STP album "Purple" is one of his favorites. [http://www.stonetemplepilots.com/bio_robert3.html]
*Wrote 3 unreleased songs with rock legend .