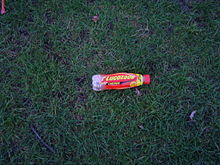 Litter is an example of environmental crime

Environmental crime can be broadly defined as illegal acts, which directly harm the environment. International bodies such as the G8, Interpol, EU, UN Environment Programme and the UN Interregional Crime and Justice Research Institute have recognised the following environmental crimes:

Abandoned or little used areas are common dumping places in America -especially railroads. Over $10 million dollars a year are used to remove illegal dumping from polluting towns and the environment. A small organization, CSXT Police Environment Crimes Unit, has been started to stop railroad dumping specifically. They have prosecuted over 1000 cases, however they lost over $90,000 in the first 90 days of investigating.

Ever since the Environmental Protection Agency's Office of Criminal Enforcement was founded in 1982, there has been a steady increase in prosecuted environmental crimes.[3] This includes the prosecution of companies that have illegally dumped or caused oil spills.

In the past, small fines were given to environmental criminals. However, today the results can lead to fines of over $18 million and 21 years in prison.

Environmental criminology examines the notions of crimes, offences and injurious behaviours against the environment and starts to examine the role that societies including corporations, governments and communities play in generating environmental harms. Criminology, is now starting to recognise the finite nature of the earth’s resources and how law enforcement agencies and the judiciary measure harm to the environment and attribute sanctions to the offenders (White 2003)[6]