The Crowsnest Highway, also known as the Interprovincial or, in British Columbia, the Southern Trans-Provincial, is an east-west highway, 1,161 km (721 mi) in length, through the southern parts of British Columbia and Alberta, providing the shortest highway connection between British Columbia's Lower Mainland and southeast Alberta. It is designated a core route in Canada's National Highway System,[1] and is designated as Highway 3 for its entire length.

The highway, which is mostly two lanes, was officially established in 1932, mainly following a mid-19th century gold rush trail originally traced out by an engineer named Edgar Dewdney. It takes its name from the Crowsnest Pass, the location at which the highway crosses the Continental Divide between British Columbia and Alberta.

In British Columbia, the first segment of the highway between the Trans-Canada Highway and Highway 5A is locally known as the Hope-Princeton Highway. In Alberta, the highway forms concurrencies with both the Red Coat Trail and the CANAMEX Corridor from Highway 2 west of Fort Macleod to Highway 4 at the eastern limits of Lethbridge. 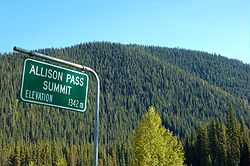 The peak of Allison Pass.

The Crowsnest Highway's total length in British Columbia is 837 km (520 mi),[citation needed] and its total length within Alberta is 324 km (201 mi).[2] The Crowsnest Highway's western terminus is at Hope, where it branches off from Highway 1. The highway goes east for 7 km (4.3 mi) to its junction with Highway 5, then through Allison Pass and Manning Provincial Park for 127 km (79 mi) towards the Town of Princeton. There are several significant ascents in this stretch between Hope and Princeton. The first is the steep climb to the Hope Slide, followed later by the remainder of the climb up to Allison Pass at an elevation of 1,342m (4,473 ft). After the summit of Allison Pass, the road descends for 40 km (25 mi) before beginning another long climb up Sunday Summit (1,284m, 4,280 ft). Soon after Sunday Summit is the descent into Princeton, where Highway 5A begins. 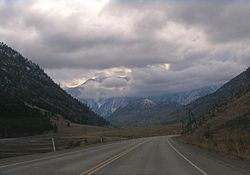 Through the Similkameen Valley westwards into the mountains

After Princeton, the Crowsnest goes southeast for 67 km (42 mi), through Hedley, to the Village of Keremeos, where a junction with a length of highway designated as 3A is located, leading towards Penticton and Highway 97. Another 46 km (29 mi) southeast, and the Crowsnest reaches the Town of Osoyoos and a junction with Highway 97. The highway then proceeds to hug the Canada-U.S. border east through a stretch of switchbacks known as Anarchist Mountain, which is also the name of the upland rural community beyond the summit.

The highway reaches the first access (Westview Drive W) to the City of Lethbridge 13 km (8.1 mi) later. At this point, the Crowsnest's only freeway segment begins. 2 km (1.2 mi) later, Highway 25 (University Drive W) branches to the north before crossing the Oldman River for the second time. The freeway segment ends at Mayor Magrath Drive, which branches as Highway 5 to the south. The highway intersects Highway 4 at the eastern limits of Lethbridge.

45 km (28 mi) east of Lethbridge, the Crowsnest reaches the Town of Taber. Within Taber, Highway 36 runs concurrently with the highway for 3 km (1.9 mi). Upon dropping the concurrency, the Crowsnest ends 113 km (70 mi) later at the Trans-Canada Highway in the City of Medicine Hat.

The following is a list of exits along the expressway and freeway portions of British Columbia Highway 3 (Crowsnest Highway). 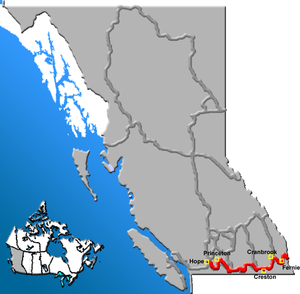 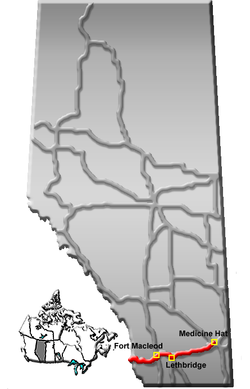 The following is a list of major intersections along Alberta Highway 3 (Crowsnest Highway) from west to east.[2][3]