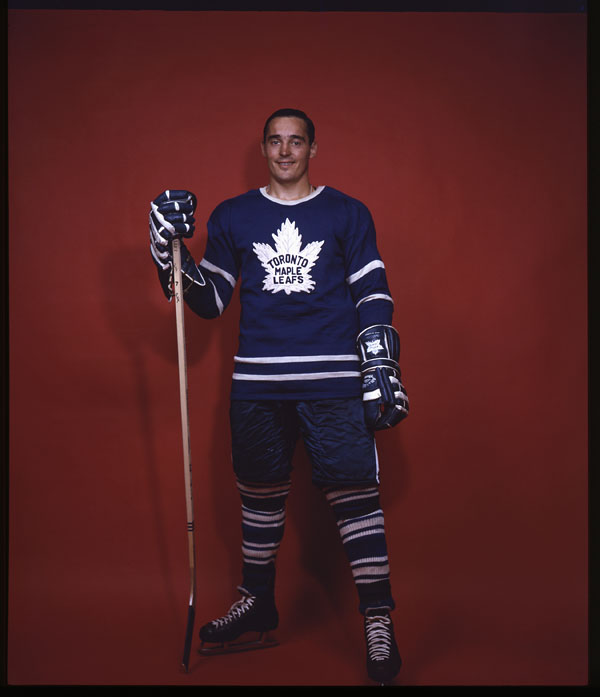 Francis William "Frank" Mahovlich ( _hr. Franjo Mahovlić), CM, (born , in Timmins, ) is a Senator, and a retired NHL player, nicknamed the "Big M." He played on six -winning teams and is an inductee of the .

The son of immigrants from , Mahovlich was scouted by several teams while playing for the Schumacher Lions of the . He signed with the , who sent him to one of their affiliates, the . Mahovlich played there while attending from 1954–57. While at St. Michael's, he received instruction from , who Mahovlich would later call the best coach he ever had. Mahovlich received the as the top player in the OHA for the 1956–57 season, in which he scored 52 goals in 49 games.

He joined the Leafs in 1957 and was a 20-goal scorer in his first season, winning the as rookie of the year in what was otherwise a rough season with the last-place Leafs. During the off-season, he took courses at Assumption University in . At the same time, was hired to run the Leafs and soon became head coach and general manager.

In the 1960–61 season, Imlach put Mahovlich on a line with and . The three immediately clicked and were the team's top three scorers that year, led by Mahovlich's 48 goals—a Leaf record that would stand for 21 years. The following season, the Leafs won the Stanley Cup, and repeated as champions in 1963 and 1964. Mahovlich led the team in goals scored in all three seasons.

Initially, Mahovlich and Imlach got along well, but their relationship deteriorated after a few seasons, particularly when Mahovlich's contract was up for renewal in 1962. He felt the Leafs gave him a low-ball offer and walked out on the team during training camp in September. Red Burnett at the "" described the situation as a "cold war" between Imlach and Mahovlich.

At that time, the was played at the beginning of the season, and during a reception in Toronto attended by team executives in the days before the game, Chicago Black Hawks owner offered the Leafs $1 million for Mahovlich. He believed he had an agreement with Leafs co-owner and paid $1,000 as a deposit with the balance to be delivered by cheque the next morning. The next day, the Leafs gave Mahovlich the money he had been asking for, and told the Black Hawks that their apparent agreement the night before had been a misunderstanding. The Leafs returned the $1,000 deposit. The Black Hawks accused the Leafs of reneging on a deal. , at this point a minority shareholder in the Leafs, was adamant that the deal should be rejected.

Mahovlich also had a rocky relationship with fans at and was often booed at home games. Imlach—who mispronounced Mahovlich's name for years—became a constant critic and, under pressure from fans and management, Mahovlich was admitted to in November 1964, suffering from what was publicly described as "constant fatigue" but diagnosed as acute depression. Mahovlich was flooded with well-wishes from fans during his time off. He returned to the lineup a month later and was still able to lead the Leafs in scoring in the 1964–65 season, despite missing 11 games. Mahovlich led the Leafs in scoring again in the 1965–66 season.

The Leafs won one final Stanley Cup in the 1966–67 season, with Mahovlich having his lowest-scoring year in seven seasons. Early into the next season, Mahovlich was again admitted to hospital, although this time it was acknowledged publicly as depression and tension. "Mahovlich is a sensitive, easily-bruised individual," wrote in a page-one story in the "Toronto Star". On in a blockbuster trade, Mahovlich was sent to the with , , and the rights to for , , and Doug Barrie.

Mahovlich had a strong finish to the season with the Red Wings, and the following year put up his best point totals in eight seasons, playing on a line with and and setting his personal record for goals in a season with 49. Initially, one of his teammates on the Red Wings was his younger brother, , who split his time between the Wings and their minor league affiliate.

In 1970–71, Red Wings general manager wanted to get rid of coach and was overruled by team owner . Once Harkness took over as general manager, he got rid of players he deemed a threat to him. On , Mahovlich was traded to the for , and Bill Collins. He was reunited with his brother, who had become a star player himself with the Canadiens. Mahovlich spent three-and-a-half seasons in Montreal, playing on the Stanley Cup-winning teams of 1971 and 1973. During the 1971–72 season, Mahovlich scored a career-high 96 points, which he nearly matched the following season with 93 points.

He also was a member of for the 1972 against the . In 1974, he left the NHL for the , and represented Canada again at the . In the WHA, he played for the and the until his retirement in 1978 at the age of 40. While with the Bulls, Mahovlich was placed on an unproductive line with Frank Beaton and Dave Hanson, one of the who had been in the movie "Slap Shot". According to John Brophy, when a reporter asked Mahovlich what was wrong, he replied, “I don’t know, but I seem to play a lot better with Howe and Delvecchio.” [Bill Boyd, "All Roads Lead to Hockey: Reports from Northern Canada to the Mexican Border", Key Porter Books, 2004, p.105.]

He attempted an NHL comeback with the Detroit Red Wings in 1979, but it was unsuccessful, and he formally retired on .

In 1998, Mahovlich was appointed to the by Prime Minister , and in the same year, he was ranked number 26 on ""' list of the 100 Greatest Hockey Players, the highest-ranking player who had spent at least a majority of his career with the Maple Leafs.