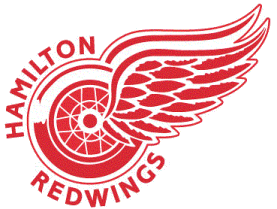 The Red Wings were founded in 1973 as the second Hamilton-based team in the .

After one season, the league divided into two leagues and the Red Wings went the way of the . In 1975-76, the other Hamilton team joined the and became the . The draw of a local Junior A club weakened the team and they took a one year leave a season later.

In 1977, under new ownership the team came back as the Kiltys. Although a very competitive team, it took the Kiltys until 1992-93 to win a Golden Horseshoe championship. With that win, the Kiltys were promoted to the newly formed with a variety of other Junior B squads.

Outside of some brief troubles in the late 1990s, the Hamilton franchise has been very successful in regular season play in the OPJHL. The team was renamed the Hamilton Red Wings in 2002. They have yet to win a league championship.