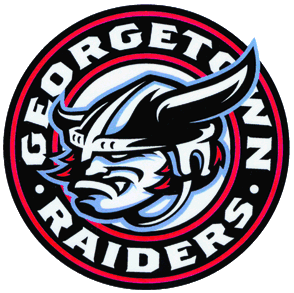 The name "Georgetown Raiders" used to belong to a different team that competed in OHA Senior A and Intermediate A ranks in the 1970s and 1980s. The two clubs are not known to be connected.

At the 2006 OPJHL Showcase Tournament, the Raiders showed the host team why they have been considered a top tier OPJHL team in recent years. They started out the tournament with a close 5-3 win against the . Their second game saw them manhandle the 's Tier III Junior "A" by a score of 7-2. They closed out the round robin with a 4-4 tie against the Atlantic league's New Jersey Rockets. In the Quarter-finals, the Raiders found themselves deadlocked with the 's Tier III Junior "A" at the end of regulation. They blew a 3 goal lead in the third period, but were saved at 6:46 of double overtime by Rob Sgarbossa. Final score: 6-5 2OT. The semi-final was much the same story. Again against the New York Bobcats, the Raiders actually found themselves down by the mid-point of the third period. They tied up the game with around 6 minutes to go and forced overtime. With 6:01 left in triple overtime, Ryan Ford earned the Raiders a birth into the finals. Final score: 5-4 3OT. The final was a high scoring affair, ending with the Raiders defeating the host by a score of 7-5. [http://www.pointstreak.com/prostats/playoffstandings.html?leagueid=418&seasonid=1595]