Chikungunya (in the Makonde language "that which bends up") virus (CHIKV) is an insect-borne virus, of the genus Alphavirus, that is transmitted to humans by virus-carrying Aedes mosquitoes.[1] There have been recent breakouts of CHIKV associated with severe illness. CHIKV infection causes an illness with symptoms similar to dengue fever, with an acute febrile phase of the illness lasting only two to five days, followed by a prolonged arthralgic disease that affects the joints of the extremities. The pain associated with CHIKV infection of the joints persists for weeks or months, or in some cases years.[2][3]

The incubation period of Chikungunya disease is from two to five days. Symptoms of the disease include a fever up to 40 °C (104 °F), a petechial or maculopapular rash of the trunk and occasionally the limbs, and arthralgia or arthritis affecting multiple joints.[4] Other nonspecific symptoms can include headache, conjunctivitis, and slight photophobia. Typically, the fever lasts for two days and then ends abruptly. However, other symptoms—namely joint pain, intense headache, insomnia and an extreme degree of prostration—last for a variable period; usually for about 5 to 7 days.[4] Patients have complained of joint pains for much longer time periods; some as long as 2 years, depending on their age.[5][6]

Chikungunya virus is indigenous to tropical Africa and Asia, where it is transmitted to humans by the bite of infected mosquitoes, usually of the genus Aedes. Chikungunya virus belongs to alphavirus genus of the Togaviridae family. It is an "Arbovirus" (Ar-arthropod, bo-borne).

CHIK fever epidemics are sustained by human-mosquito-human transmission. The word "chikungunya" is thought to derive from description in local dialect of the contorted posture of patients afflicted with the severe joint pain associated with this disease.[8] The main virus reservoirs are monkeys, but other species can also be affected, including humans.[9]

Infection is highly sensitive to the antiviral activity of type I and II interferon.

The most effective means of prevention are protection against contact with the disease-carrying mosquitoes and mosquito control. These include using insect repellents with substances like DEET (N,N-Diethyl-meta-toluamide; also known as N,N'-Diethyl-3-methylbenzamide or NNDB), icaridin (also known as picaridin and KBR3023), PMD (p-menthane-3,8-diol, a substance derived from the lemon eucalyptus tree), or IR3535. Wearing bite-proof long sleeves and trousers (pants) also offers protection. In addition, garments can be treated with pyrethroids, a class of insecticides that often has repellent properties. Vaporized pyrethroids (for example in mosquito coils) are also insect repellents. Securing screens on windows and doors will help to keep mosquitoes out of the house. In the case of the day-active Aedes aegypti and Aedes albopictus, however, this will have only a limited effect, since many contacts between the vector and the host occur outside.

There are no specific treatments for Chikungunya. There is no vaccine currently available. A Phase II vaccine trial, sponsored by the US Government and published in the American Journal of Tropical Medicine and Hygiene in 2000, used a live, attenuated virus, developing viral resistance in 98% of those tested after 28 days and 85% still showed resistance after one year.[10]

A serological test for Chikungunya is available from the University of Malaya in Kuala Lumpur, icul.

Chloroquine is gaining ground as a possible treatment for the symptoms associated with Chikungunya, and as an anti-inflammatory agent to combat the arthritis associated with Chikungunya virus. A University of Malaya study found that for arthritis-like symptoms that are not relieved by aspirin and non-steroidal anti-inflammatory drugs (NSAID), chloroquine phosphate (250 mg/day) has given promising results.[11] Unpublished studies in cell culture and monkeys show no effect of chloroquine treatment on reduction of chikungunya disease. The fact sheet[9] on Chikungunya advises against using aspirin, ibuprofen, naproxen and other NSAIDs that are recommended for arthritic pain and fever.

A virus-like particle based vaccine has protected monkeys from Chikungunya virus infection, and passive immunization from these monkeys protected immunodeficient mice against exposure to a dose of virus that would otherwise be lethal, demonstrating that the humoral response was highly protective.[12]

A DNA vaccine candidate is also being tested. The vaccine cassette was designed based on CHIKV Capsid and Envelope specific consensus sequences with several modifications, including codon optimization, RNA optimization, the addition of a Kozak sequence, and a substituted immunoglobulin E leader sequence. These constructs induced humoral and cellular immune responses in mice.[13]

Antibodies isolated from patients recovering from Chikungunya fever have been shown to protect mice from infection.[14]

Ocular inflammation from Chikungunya may present as iridocyclitis, and have retinal lesions as well.[15]

Pedal oedema (swelling of legs) is observed in many patients, the cause of which remains obscure as it is not related to any cardiovascular, renal or hepatic abnormalities.

Three genotypes of this virus have been described: West African, East/Central/South African and Asian genotypes.[18] 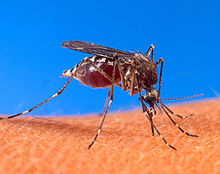 In Africa, chikungunya is spread via a sylvatic cycle in which the virus largely resides in other primates in between human outbreaks.[17]

On 28 May 2009 in Changwat Trang of Thailand where the virus is endemic, the provincial hospital decided to deliver by Caesarean section a male baby from his Chikungunya-infected mother—Khwanruethai Sutmueang, 28, a Trang native—in order to prevent mother-fetus virus transmission. However, after delivering the baby, the physicians discovered that the baby was infected with Chikungunya virus, and put him into intensive care because the infection had left the baby unable to breathe by himself or to drink milk. The physicians presumed that Chikungunya virus might be able to be transmitted from a mother to her foetus; however, there is no laboratory confirmation for this presumption.[23]

The name is derived from the Makonde word meaning "that which bends up" in reference to the stooped posture developed as a result of the arthritic symptoms of the disease. The disease was first described by Marion Robinson[24] and W.H.R. Lumsden[25] in 1955, following an outbreak in 1952 on the Makonde Plateau, along the border between Mozambique and Tanganyika (the mainland part of modern day Tanzania).

According to the initial 1955 report about the epidemiology of the disease, the term 'chikungunya' is derived from the Makonde root verb kungunyala, meaning to dry up or become contorted. In concurrent research, Robinson glossed the Makonde term more specifically as "that which bends up." Subsequent authors apparently overlooked the references to the Makonde language and assumed that the term derived from Swahili, the lingua franca of the region. The erroneous attribution of the term as a Swahili word has been repeated in numerous print sources. Many other erroneous spellings and forms of the term are in common use including "Chicken guinea", "Chicken gunaya," and "Chickengunya".[citation needed]

Since its discovery in Tanganyika, Africa, in 1952, chikungunya virus outbreaks have occurred occasionally in Africa, South Asia, and Southeast Asia, but recent outbreaks have spread the disease over a wider range.

The first recorded outbreak of this disease may have in 1779.[26]

Use as a biological weapon