The political status of Transnistria, an unrecognized state on the internationally recognized territory of the Republic of Moldova, has been disputed since the Transnistrian declaration of independence on September 2, 1990. This declaration established a Soviet Socialist Republic separate from the Moldavian SSR, while still part of the Soviet Union. Following the breakup of the Soviet Union and Moldova's own declaration of independence in 1991, the PMSSR was transformed into the Pridnestrovian Moldavian Republic (PMR), commonly referred to as Transnistria. No United Nations member country recognizes the PMR's bid to sovereignty.

Moldova lost de facto control of Transnistria in 1992, in the wake of the War of Transnistria. Since that time, the PMR has received diplomatic recognition only from Abkhazia and South Ossetia, two post-Soviet states with minimal recognition themselves.

The two main political parties in Transnistria, the Republican Party (Respublikanskaya Partiya Pridnestroviya) and Renewal (Obnovleniye) oppose any rapprochement with Chişinău. The Social Democratic Party headed by former local MP Alexander Radchenko is the only functioning party in the region to favor reintegration. Negotiations under OSCE auspices have been ongoing since 1997 based on the premise that better relations are desirable, and that the restrictions on communications, movement of people, and trade flows must be removed. 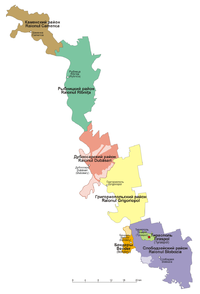 Although ethnic Moldavians have historically made up a large minority of the population, the area was never considered part of the traditional lands of Moldavian settlement.[1] The territory east of the Dniester river belonged to Kievan Rus' and the kingdom of Halych-Volhynia from the ninth to the fourteenth centuries, passing to the Polish-Lithuanian Commonwealth, and then into the hands of Russia in the eighteenth century.

By this time, the Principality of Moldavia had been in existence for almost five hundred years with the Dniester marking its eastern boundary for all this time.

Even with the rise of Romanian irredentism in the nineteenth century, the far reaches of Transylvania were considered the western boundary of the Greater Romanian lands[1] while the Dniester formed the eastern.[2]

The national poet Mihai Eminescu, in his famous poem Doina, spoke of a Romania stretching "from the Dniester to the Tisza".

The Soviet Union in the 1930s had an autonomous region of Transnistria inside Ukraine, called the Moldavian Autonomous Soviet Socialist Republic (MASSR), where nearly half of the population were neolatin speaking people.

Indeed, between 1929 and 1940, Tiraspol was the capital of the Moldavian ASSR, an autonomous republic within Ukrainian SSR, which existed from 1924 to 1940.

During World War II, when Romania, aided by Nazi Germany, for the first time in history took control of Transnistria, it made no attempts to annex the occupied territory and considered it a temporary buffer zone between Greater Romania and the Soviet front line.[3][4]

Position of the PMR government advocates

According to PMR advocates, the territory to the East of the Dniester River never belonged either to Romania, nor to its predecessors, such as the Principality of Moldavia. This territory was split off from the Ukrainian SSR in a political maneuver of the USSR to become a seed of the Moldavian SSR (in a manner similar to the creation of the Karelo-Finnish SSR). In 1990, the Pridnestrovian Moldavian SSR was proclaimed in the region by a number of conservative local Soviet officials opposed to perestroika. This action was immediately declared void by the then president of the Soviet Union Mikhail Gorbachev.[5]

At the dissolution of the Soviet Union in 1991, Moldova became independent. The Moldovan Declaration of Independence denounced the Molotov-Ribbentrop Pact and declared the 2 August 1940 "Law of the USSR on the establishment of the Moldavian SSR" null and void. The PMR side argues that, since this law was the only legislative document binding Transnistria to Moldova, there is neither historical nor legal basis for Moldova's claims over the territories on the left bank of the Dniester.[6]

The Republic of Moldova considers itself the rightful successor state to the Moldavian SSR (which was guaranteed the right to secession from the Soviet Union under the last version of Soviet Constitution). By the principle of territorial integrity, Moldova claims that any form of secession from the state without the consent of the central Moldovan government is illegal.

It considers the current Transnistria-based PMR government to be illegitimate and not the rightful representative of the region's population, which has an Moldovan plurality (39.9% as of 1989). The Moldovan side insists that Transnistria cannot exist as an independent political entity and must be reintegrated into Moldova.

According to Moldovan sources, the political climate in Transnistria does not allow the free expression of the will of the people of the region and supporters of reintegration of Transnistria in Moldova are subjected to harassment, arbitrary arrests and other types of intimidation from separatist authorities.

At the same time, some areas which are situated on the right bank of the Dniester are under PMR control. These areas consist of the city of Bender with its suburb Proteagailovca, the communes Gîsca, Chiţcani (including villages Mereneşti and Zahorna), and the commune of Cremenciug, formally in the Căuşeni District, situated south of the city of Bender.

The breakaway PMR authorities also claim the communes of Varniţa, in the Anenii Noi District, a northern suburb of Bender, and Copanca, in the Căuşeni District, south of Chiţcani, but these villages remain under Moldovan control.

These territorial disputes led to tense situations several times. In 2005 PMR Militia entered Vasilievca, which is located over the strategic road linking Tiraspol and Rîbniţa, but withdrew after a few days.[8] In 2006 there were tensions around Varniţa. In 2007 there was a confrontation between Moldovan and PMR forces in the Dubăsari-Cocieri area; however, there were no casualties.

The mayor of the village of Corjova, which is under Moldovan control, was arrested by the PMR militsia (police) together with a councillor of Moldovan-controlled part of the Dubăsari district on 13 May 2007.[9]