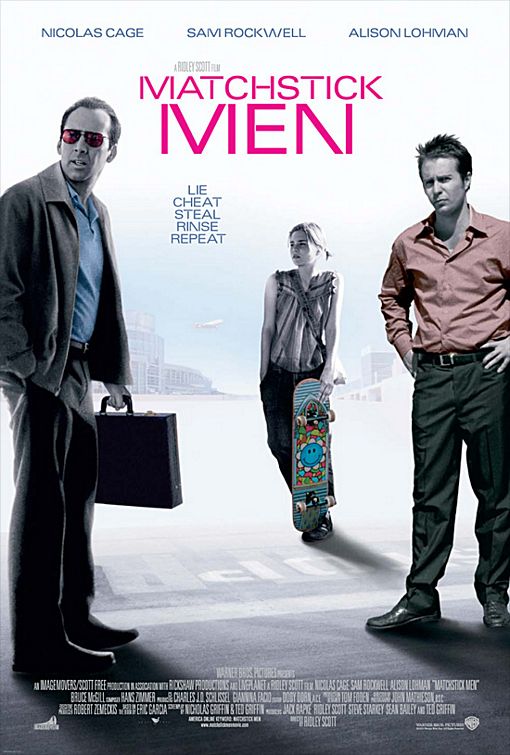 Roy Waller () is a troubled residing in , . Alongside his partner and Frank Mercer (), Roy operates a fake lottery, selling overpriced water filtration systems to unsuspecting customers; in the process, Roy has collected over one million dollars and has developed a crush on Kathy (Sheila Kelley), a cashier at a local supermarket. Roy suffers from several mental disorders, including , , and a disorder - not to mention the fact that he yells, "Pygmies" whenever something surprises or upsets him. After Roy experiences a violent , Frank suggests he see a psychiatrist, Dr. Harris Klein ().

Klein provides Roy with medication, and in therapy has Roy recall his past relationship with his ex-wife, Heather (), who was pregnant during the time of the divorce. By Roy's behest, Klein informs Roy that he called Heather and found out that Roy has a fourteen year-old daughter, Angela (). Roy and Angela meet and Angela quizzes Roy regarding his life and occupation. Her cheerful personality rejuvenates him, and Roy thus agrees to work with Frank on a long-term con: Their target is Chuck Frechette (), an arrogant businessman whom the duo decides to con with the Jamaican Switch.

One night, Angela unexpectedly arrives at Roy's house, saying that she has had a fight with her mother, and decides to stay for the weekend before returning to school, much to Roy's discomfort. She explores his belongings and causes him to rethink his life, which he mentions during therapy with Klein. Angela returns home late one night, leading to an argument between the two. During dinner, Roy admits that he is a con artist and reluctantly agrees to teach Angela a con. The two of them go to a local laundromat and con an older woman into believing she has won the lottery, and she shares half of her expected winnings with Angela; however, Roy then forces Angela to return the money.

Roy questions the morality of teaching his daughter such practices, but believes his rejuvenation is a good sign. He then goes with her but is interrupted when Frank reveals that Chuck's flight to the has been updated to that day instead of Friday as planned. With little time left, Roy reluctantly decides to let Angela play the part of distracting Chuck midway through the con; however, after the con is finished, Chuck realizes what has happened and chases the two into the parking lot before they escape. Roy then learns that Angela was arrested a year ago, and forces her to stop calling him despite the fact that she has bought him a small present as a sign of affection.

Without Angela, Roy returns to his disoriented state, and during another panic attack, he ultimately learns that the medication given him by Klein isn't real, proving that he doesn't actually need it to be happy and decently adjusted. He decides that he needs Angela in his life but that he would have to change his lifestyle, much to Frank's disappointment. Roy and Angela return from dinner one night to find Chuck waiting for them with a gun, alongside a badly beaten Frank. Angela shoots Chuck and Roy sends her off with Frank into hiding until the matter can be sorted out. As Roy prepares to take care of Chuck's body, a live Chuck suddenly knocks Roy unconscious.

Roy awakens in a hospital, where the police inform him that Chuck eventually died from the gunshot and Frank and Angela have disappeared. Klein appears and Roy gives him the password to his bank account, ordering him to give the money to Angela when she is found. Later, Roy awakens to find that the "police" have disappeared, his "hospital room" is actually on the roof of a parking garage, "Dr. Klein's" office is vacant, and essentially all of his money has been taken. As he begins to realize that Frank pulled a con on him, Roy drives over to Heather's (who he hasn't seen for years) looking for Angela. While speaking with Heather, Roy learns the truth: Heather never gave birth - she miscarried. The truth is there is no "Angela" - the young girl he thought was his child was actually a con artist and accomplice of Frank's.

A year later, Roy has become an employee at a local carpet store, which Angela and her boyfriend one day wander into. Roy confronts Angela but ultimately forgives her, realizing that he is now honest, coping with his mental disorders in a healthy manner and leading a much happier lifestyle as a respectable citizen. Angela reveals that she did not receive her fair share of the cut from Frank, and that it was the only con she ever pulled. Angela and her boyfriend depart and Roy returns home to his new wife Kathy (the cashier he had a crush on), who is now pregnant with his child.

"Matchstick Men" opened on , to mostly positive reviews. awarded the film three-and-a-half stars (out of four), praising the film for its "sly, biting sense of humor" and "emotionally satisfying" elements. He also praised the film's acting, and ultimately noted that the film was "worth every cent" of the ticket price and was "the first winner of the fall movie season." [ [http://www.reelviews.net/movies/m/matchstick_men.html Review: Matchstick Men ] ] Film critic wrote an ecstatic review, awarding the film four stars (out of four). Ebert noted that the film is "so absorbing that whenever it cuts away from the plot, there is another, better plot to cut to." He also recommended the film for several Oscar nominations, most notably Nicolas Cage's performance and the film's screenplay. [ [http://rogerebert.suntimes.com/apps/pbcs.dll/article?AID=/20030912/REVIEWS/309120303/1023 :: rogerebert.com :: Reviews :: Matchstick Men (xhtml) ] ]

Some critics, however, were not impressed. Renee Graham of the criticized the film for its sentimentality, writing that "director Ridley Scott goes all gooey in this off-key adaptation of Eric Garcia's cynical novel." Despite praising the performances of Sam Rockwell and Alison Lohman, Graham wasn't fond of Cage, writing that he is more "irritating than interesting" and that the film follows a similar style. [ [http://www.boston.com/movies/display?display=movie&id=2603 Matchstick Men Movie Review - Matchstick Men Movie Trailer - The Boston Globe ] ] Similarly, Lou Lumenick of the praised the film's acting but noted that the viewer "may end up feeling as suckered as Roy's victims." Lumenick was also not fond of the twist ending, believing that it was a large detractor to the film's value. [http://www.nypost.com/entertainment/movies/5576.htm] Nevertheless, the film holds an 82% "Certified Fresh" rating on . [ [http://www.rottentomatoes.com/m/matchstick_men/ Matchstick Men - Movie Reviews, Trailers, Pictures - Rotten Tomatoes ] ]

Opening in 2,711 theaters in the and , the film's opening weekend gross stood at second place with $13.0 million for a mild per-theater-average of $4,827; despite receiving better reviews than its fellow openers, it ultimately lost the number-one position to "". The film eventually grossed $36.9 million domestically, which was an underwhelming total. The film was not much more successful in the global market, grossing a worldwide total of $65.5 million. [ [http://www.boxofficemojo.com/movies/?id=matchstickmen.htm Matchstick Men (2003) ] ] Additionally, the film was virtually ignored during the awards season, receiving no Oscar nominations despite positive reviews. Nevertheless, the film found better success on home video.