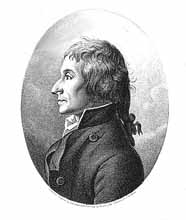 Joseph Louis Proust was born on September 26, 1754 in , . His father served as an apothecary in Angers. Joseph studied chemistry in his father’s shop and later came to Paris where he gained the appointment of apothecary in chief to the Salpetriere [http://55.1911encyclopedia.org/P/PR/PROUST_JOSEPH_LOUIS.htm] . He also taught chemistry along with , a famous aeronaut.

Under 's influence Proust went to . There he taught at the Chemistry School in and at the .

Proust's best known work was derived from a controversy with chemist . Berthollet did not believe that substances always combine in constant and definite proportions as Proust did. Proust eventually was able to prove Berthollet wrong in 1799 and published his own hypothesis.

Proust’s largest improvement into the realm of science was disproving Berthollet with the , which is sometimes also known as Prousts Law (Encarta 2005). Proust studied copper carbonate, the two tin oxides, and the two iron sulfides to prove this law. He did this by making artificial copper carbonate and comparing it to natural copper carbonate. With this he showed that each had the same proportion of weights between the three elements involved (Cu, C, O). Between the two types of the other compounds, Proust showed that no intermediate indeterminate compounds exist between them. Proust published this paper in 1794, but the law was not accepted until 1811, when the Swedish chemist gave him credit for it (Encarta 2005).

There are, however, exceptions to the . An entire class of substances does not follow this rule. The compounds are called s or Berthollides, after Berthollet. The ratio of the elements present in the compound can fluctuate within certain limits, such as in the example of . The ideal formula is FeO, but due to crystallographic vacancies it is reduced to about Fe0.95O.

Proust was also interested in studying the sugars that are present in sweet vegetables and fruits. In 1799, Proust demonstrated, to his class in , how the sugar in is identical to that found in . This later became known as . Overall, Proust discovered three types of sugar during his studies.