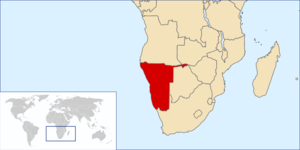 Etosha National Park is a national park in the of northwestern . The park shares boundaries with the regions of , and .

Etosha was first established in 1907, when Namibia was a German colony known as "". At the time, the park’s original 100,000 km² (38,500 mile²) made it the largest in the world. Due to political changes since its original establishment, the park is now slightly less than a quarter of its original area, but still remains a very large and significant area in which is protected.

The dominates the park. The salt pan is roughly 130 km long and as wide as 50 km in places. The salt pan is usually dry, but fills with water briefly in the summer, when it attracts s and s in particular. Perennial springs attract a variety of animals and birds throughout the year, including the endangered and the endemic .

In the , winds blowing across the salt pan pick up saline dust and carry it across the country and out over the southern Atlantic. This salt enrichment provides minerals to the soil downwind of the pan on which some wildlife depends, though the salinity also creates challenges to farming.

The Etosha Pan was one of several sites throughout in the Southern African Regional Science Initiative (). Using satellites, aircraft, and ground-based data from sites such as Etosha, partners in this program collected a wide variety of data on aerosols, land cover, and other characteristics of the land and atmosphere to study and understand the interactions between people and the .

A long fence has been erected along the park’s 850 km boundary to control the spreading of disease. The animals concentrate around the new s, resulting in excessive grazing in their vicinity. Fifty waterholes have been constructed to attract animals and so improve the viewing prospect for visitors.