The coat of arms of Åland features a gold red deer on a blue field. The arms carries a coronet of an count (older Swedish model). 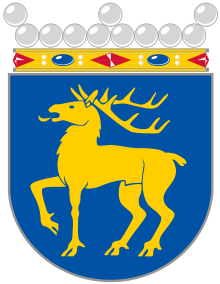 Coat of Arms of Åland

Blazon: "Azure a Deer passant Or"

Åland, which was a Province of Sweden, was granted its coat of arms prior to the funeral of King Gustav I of Sweden in 1560.

The coat of arms originally blazoned for Åland displayed two roe deers on a field with nine white roses. But Åland was never to be granted the arms which was originally intended, instead it was awarded a coat of arms displaying a deer, an odd fact since the Åland fauna never included deer.

In the 1940s the office of the Swedish Herald of the Realm (Riksheraldikerämbetet) discovered that a less than flattering mistake had been committed almost four centuries earlier. The arms granted to Åland had originally been intended for Öland. Öland, an island off the coast of Småland, was similarly the victim in this mixup. It had, with its history as a royal game park, an abundant supply of deer but no natural connection to the nine Finnish roses which adorned its coat of arms. The coats of arms had been mixed up and the blunder went unnoticed by the proper authorities for several centuries.

This decision to adopt the coat of arm originally intended made it necessary to introduce some minor alterations for Öland. It included the introduction of a collar and differentiating the color of its armamanent, antlets and hoofs.

Blazon: "Azure a Deer Or attired, hoofed and gorged Gules."