Dennis Dragon
This article is about a double-decker bus. For the musician and member of The Surf Punks, see Dennis Dragon (musician).

The Dennis Dragon (another name Dennis Condor was used by the "Dragons" new to China Motor Bus) is a 3-axle double decker bus built by Dennis of the United Kingdom in the 1980s and 1990s.

The Dennis Dragon was named "Dragon" because they were designed for Kowloon Motor Bus. In Chinese, Kowloon means "nine dragons" and it is an area in Hong Kong, so the name "Condor" was adopted for China Motor Bus's "Dragons" to avoid "naming for an opponent company".

The Dennis Dragon/Condor chassis was developed from 2-axle Dennis Dominator, with two separate wheels fitted in front of the rear axle (auxiliary axle was fitted since 1986). It could be fitted with Gardner or Cummins engine (the Cummins engine was initially available as an option, but it gradually replaced the Gardner engine as standard), coupled to a Voith or ZF gearbox.

In 1982, Kowloon Motor Bus bought three 12 m non air-conditioned Dennis Dragons (fleet code: 3N) with Alexander bodywork for evaluation. After that, KMB bought 188 more 12 m Dennis Dragon, but all of these buses were bodied with Duple Metsec bodywork and had 3 doors (1 for boarding and 2 for alighting).

In 1982, China Motor Bus received two 12 m non air-conditioned Dennis Condors for evaluation, one of them was fitted with Duple Metsec bodywork, and the other one with Alexander bodywork.

Some of the air conditioned Dennis Condors had been withdrawn by NWFB and many were sold for further service. 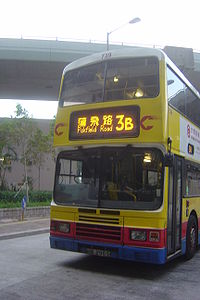 Citybus started to order air-conditioned Dennis Dragon in 1993. The Duple Metsec bodywork for Citybus's Dragons, which were assembled by Salvador Caetano in Portugal, were different from those supplied to KMB/CMB in that the frontal design resembled with those used on Alexander R-type and a wider front door was used.

One of Citybus's 10.3 m Dennis Dragon (fleet number 713) had been prematurely withdrawn in 2002 due to fire damage.

In early 1996, Hong Kong Air Cargo Terminals Limited (HACTL) received four Dennis Dragons for use as staff buses. They were similar with Citybus's 12-metre Dragon in appearance but with no route indicators and narrower seats were fitted so as to increase the seating capacity.

All these buses were acquired by New World First Bus after HACTL ceased to operate its staff bus routes in September 1999. They re-entered service in 2000.

Later, all the Dennis Dragons in Kenya were shipped back to the UK and were allocated to Stagecoach Manchester for their low fares Magic Bus fleet. They re-entered service between 1998 and 2000 where they would stay in service with the company until 2010.

After finishing the last orders, the Dennis Dragon was finally superseded by low-floor Dennis Trident 3 in 1997.