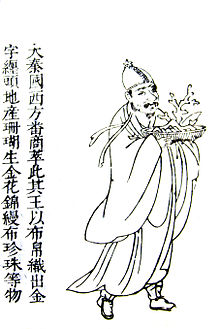 The Chinese impression of the Daqin people, from the Ming Dynasty encyclopedia Sancai Tuhui (The caption reads: The Country of Da Qin, is where western businessmen are gathering. The king wraps his head by cloth in pyramid shape. This land produces coral, gold, brocade with pattern, silk cloth (without pattern), pearls, etc. ) 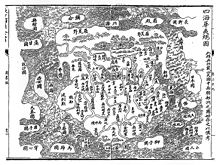 Daqin (大秦國) appears at the Western edge of this Chinese world map, the Sihai Huayi Zongtu.

Daqin (Chinese: 大秦; pinyin: Dàqín alternative transliterations include Tachin, Tai-Ch'in) is the ancient Chinese name for the Roman Empire and, depending on context, the Near East, especially Syria.[1] It literally means "Great Qin", Qin (Chinese: 秦; pinyin: Qín) being the name of the founding dynasty of the Chinese Empire. Historian John Foster defined it as "...the Roman Empire, or rather that part of it which alone was known to the Chinese, Syria."[2]

Following the opening of the Silk Road in the 2nd century BC, the Chinese thought of the Roman Empire as a civilized pendant to the Chinese Empire. The Romans occupied one extreme position on the trade route, with the Chinese located on the other.

China never managed to reach the Roman Empire directly in antiquity, although general Ban Chao sent Gan Ying as an envoy to "Daqin" in 97 AD. Gan Ying did not reach Daqin, he stopped at the coast of a large sea, because "sailor(s) of the Parthian west border" told him that the voyage to cross the sea might take a long time and be dangerous. Gan Ying left a detailed account of the Roman Empire, but it is generally considered to have been based on second hand information:

The Kingdom of Da Qin (the Roman Empire) is also called Lijian. As it is found to the west of the sea, it is also called the Kingdom of Haixi ("West of the Sea"). The territory extends for several thousands of li. It has more than four hundred walled towns. There are several tens of smaller dependent kingdoms. The walls of the towns are made of stone. They have established postal relays at intervals, which are all plastered and whitewashed. There are pines and cypresses, as well as trees and plants of all kinds.[3]

Gan Ying gives a very idealistic view of Roman governance which is likely the result of some story he was told while visiting the Persian Gulf in 97 CE. He also described, less fancifully, Roman products:

Their kings are not permanent. They select and appoint the most worthy man. If there are unexpected calamities in the kingdom, such as frequent extraordinary winds or rains, he is unceremoniously rejected and replaced. The one who has been dismissed quietly accepts his demotion, and is not angry. The people of this country are all tall and honest. They resemble the people of the Middle Kingdom and that is why this kingdom is called Da Qin [literally, ‘Great China’]. This country produces plenty of gold [and] silver, [and of] rare and precious [things] they have luminous jade, 'bright moon pearls,' Haiji rhinoceroses, coral, yellow amber, opaque glass, whitish chalcedony, red cinnabar, green gemstones, gold-thread embroideries, woven gold-threaded net, delicate polychrome silks painted with gold, and asbestos cloth.
They also have a fine cloth which some people say is made from the down of 'water sheep' [= sea silk], but which is made, in fact, from the cocoons of wild silkworms (= wild silk). They blend all sorts of fragrances, and by boiling the juice, make a compound perfume. [They have] all the precious and rare things that come from the various foreign kingdoms. They make gold and silver coins. Ten silver coins are worth one gold coin. They trade with Anxi [Parthia] and Tianzhu [North-western India] by sea. The profit margin is ten to one. . . . The king of this country always wanted to send envoys to the Han, but Anxi [Parthia], wishing to control the trade in multi-coloured Chinese silks, blocked the route to prevent [the Romans] getting through [to China].[3]

In later eras, starting in 550 CE, as Syriac Christians settled along the Silk Road and founded mission churches, Daqin or Tai-Ch'in is also used to refer to these Christian populations rather than to Rome or the Roman church.[1] So, for example, when the Taoist emperor Wuzong closed Christian monasteries in the mid-9th century, the imperial edict[clarification needed] commanded:[4]

As for the Tai-Ch'in (Syrian Christian) and Muh-hu (Zoroastrian) forms of worship, since Buddhism has already been cast out, these heresies alone must not be allowed to survive."[5]

The name "Daqin" for Rome was used on Chinese maps as late as the 16th century, such as the Sihai Huayi Zongtu. The identification of "Daqin" with the Western Roman Empire, Byzantium, or the Church of the East varies with the era and context of the document.

To the Chinese, the capital of Daqin was "An-tu", or Antioch, the first great Christian city.[6]