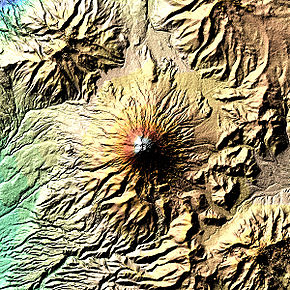 Volcano has an inner crater inside the outer crater. Colors show elevations. Courtesy of NASA[3]

Cotopaxi is a stratovolcano in the Andes Mountains, located about 28 km (17 mi) south of Quito, Ecuador, South America.[4] It is the second highest summit in the country, reaching a height of 5,897 m (19,347 ft)

Cotopaxi has an almost symmetrical cone that rises from a highland plain of about 3,800 metres (12,500 ft), with a width at its base of about 23 kilometres (14 mi).[5] It has one of the few equatorial glaciers in the world, which starts at the height of 5,000 metres (16,400 ft). The mountain is clearly visible on the skyline from Quito.[4] It is part of the chain of volcanoes around the Pacific plate known as the Pacific Ring of Fire.

The volcano is the subject of 1855 and 1862 paintings by Frederic Edwin Church.

Cotopaxi is one of the highest active volcanoes in the world. However, claims that Cotopaxi is the highest active volcano in the world are incorrect. Llullaillaco volcano is considerably higher and is definitely in an active phase, having erupted as recently as 1877.[6] Ojos del Salado is higher still, and there are indications near its summit of recent activity, although its remoteness precludes a definitive statement as to whether it is currently active.

Since 1738, Cotopaxi has erupted more than 50 times, which created the numerous valleys formed by lahars (mudflows) around the volcano. Cotopaxi poses a high risk to the local population, their settlements and fields.

Cotopaxi's most violent eruptions in historical times occurred in the years 1744, 1768, and 1877. In the 1877 eruption pyroclastic flows descended all sides of the mountain, with lahars traveling more than 100 km into the Pacific Ocean and western Amazon basin draining the valley.[2] There was a major eruption in 1903 through 1904, and some minor activity in 1942 as well as 1975 but it did not produce any major events. In the most recent case, fumarolic activities and sulfuric emissions increased and ice around the inside and on the southeastern side of the cone started to melt.

The main danger of a huge eruption of Cotopaxi would be the flow of ice from its glacier. If there were to be a very large explosion, it would destroy most of the settlements within the valley in the suburban area of Quito (pop. more than 1,000,000).[7] Another city which would be in great danger is Latacunga which is located in the south valley. In 1744 and 1768 an eruption destroyed the colonial town of Latacunga.

The first European who tried to climb the mountain was Alexander von Humboldt in 1802, however, he only reached a height of about 4500 m. In 1858 Moritz Wagner investigated the mountain, but he could not reach the summit either. On November 27, 1872, geologist Wilhelm Rajss finally reached the summit of Cotopaxi.[citation needed]

In 1873 it was summited by Moritz Alphons Stübel, then in 1880 by Edward Whymper. Painters Rudolf Reschreiter and Hans Meyer reached the summit in 1903 and many of Reschreiter's paintings feature a view of Cotopaxi.[citation needed]

Today, mountain guide companies offer regular guided climbs of the mountain. These involve driving to a height of 4300 m. At 4800 m is the José Ribas mountain hut, where climbers can spend the night and from which their summit bid begins. Summiting normally starts early night, 12.30 am, to reach the summit at latest 7.30 am, and return to the hut before the snow melts and glacier crevasses moves/evolves.

Climbing Cotopaxi is alpine F/PD grade, and relatively popular, with sometimes 100 climbers attempting it on weekends.[8] It is normally done from the mountain hut at 4800m on north side, without any intermediate camps. A 4WD track goes up from the national park entrance to 4600m altitude, just below the hut. Adventure tourism operators in Quito offer mountain biking tours from that point downhill along the track.

Many sources claim that Cotopaxi means "Neck of the Moon" in an indigenous language, but this is unproven. It was honored as a "Sacred Mountain" by local Andean peoples, even prior to the beginning of Inca domination in the 15th century. It was worshiped as “rain sender”, that served as the guarantor of the land's fertility, and at the same time its summit was revered as a place where gods lived.[citation needed]

Cotopaxi is commonly depicted in the traditional paintings of the indigenous people of Tigua as the volcano holds significant cultural value.[9]