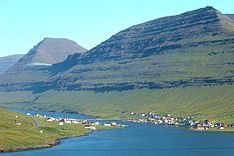 Norðdepil has been connected with the town of Hvannasund on Viðoy by road since 1963. Because the two communities are located directly across from each other on opposite shores, they often act as one community.

Since 1967, two tunnels have connected Norðdepil with the regional metropolis of Klaksvík. On the east coast of Borðoy there is a road to Múli.