Cooper's Hawk (Accipiter cooperii) is a medium-sized hawk native to the North American continent and found from Canada to Mexico. As in many birds of prey, the male is smaller than the female. The birds found east of the Mississippi River tend to be larger on average than the birds found to the west.

Cooper's Hawk was first described by French naturalist Charles Lucien Bonaparte in 1828. It is a member of the goshawk genus Accipiter. This bird was named after the naturalist William Cooper, one of the founders of the New York Lyceum of Natural History (later the New York Academy of Sciences) in New York. Other common names; Big Blue Darter, Chicken Hawk, Hen Hawk, Mexican Hawk, Quail Hawk, Striker and Swift Hawk.[2]

The average size of an adult male ranges from 220 to 410 g (7.7-14.5 oz) with a length between 35 and 46 cm (14-18 in). The adult male is significantly smaller than the average female, which are 330 to 680 g (11.7-24 oz) and 42 to 50 cm (17-20 in) long. Wingspan ranges from 62 to 90 cm (25-36 in).[3] Individuals living in the eastern regions tend to be larger and heavier than those in the western regions.[4] All have short rounded wings and a very long tail with dark bands, round-ended at the tip. Adults have red eyes and have a black cap, with blue-gray upper parts and white underparts with fine, thin, reddish bars. Their tail is blue gray on top and pale underneath, barred with black bands. [5] Immatures have yellow eyes and have a brown cap, with brown upper parts and pale underparts with thin black streaks mostly ending at the belly. Their tail is brown on top and pale underneath, barred with dark bands. The eyes of this hawk, as in most predatory birds, face forward, enabling good depth perception for hunting and catching prey while flying at top speeds. They have hooked bills that are well adapted for tearing flesh of prey.[4] Immatures are somewhat larger than a Sharp-shinned Hawk and smaller than a Northern Goshawk, though small males nearly overlap with large female Sharp-shinned Hawks, and large female Cooper's Hawks nearly overlap with small male Goshawks. The Cooper's Hawk appears long-necked in flight and has been described by birdwatchers as looking like a "flying cross". The Cooper’s Hawk is seen mostly flying with quick, consecutive wing beats and a short glide, though they may also soar.[6]

Their breeding range extends from southern Canada to northern Mexico. They are generally distributed more to the south than the other North American Accipiters, the Sharp-shinned Hawk and the Northern Goshawk. Birds from most of the Canadian and northern-U.S.-range migrate in winter, and some Cooper's Hawks winter as far south as Panama).[7] The Cooper’s Hawk occur in various types of mixed deciduous forests and open woodlands, including small woodlots, riparian woodlands in dry country, open and pinyon woodlands, and forested mountainous regions and also now nests in many cities.[7] They were once thought to be adverse to cities and towns, but are now fairly common urban and suburban birds. The cities provide plenty Rock Pigeon and Mourning Dove for the Cooper’s Hawk to prey on.[5] 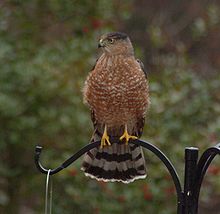 Eating a finch in a backyard with feeders

These birds capture prey from cover or while flying quickly through dense vegetation, relying almost totally on surprise. One study showed that this is a quite dangerous hunting style. More than 300 Cooper’s Hawk skeletons were investigated and 23% revealed healed fractures in the bones of the chest.[5] Most prey are mid-sized birds, with typical prey including American Robins, jays, woodpeckers, European Starlings,quail, icterids and doves. Birds preyed on can range in size from wood-warblers to Ring-necked Pheasants. They may also prey upon the raptor American Kestrel.[8] They have been known to rob nests and also eat small mammals like chipmunks, hares, mice, squirrels, and bats.[5] Other possibilities are lizards, frogs, snakes and large insects. It normally catches its prey with its feet and kills it by repeatedly squeezing it and holding it away from its body until it dies. They have also been seen drowning their prey, holding it underwater until it stops moving.[5] The hawks, in addition, often pluck the feathers off their prey on a post or other perch. They are increasingly seen hunting smaller songbirds in backyards with feeders. They will perch in trees overlooking the feeders, then swoop down and scatter the other birds in order to capture one in flight. These hawks can also pursue their prey on the ground by half running and half flying.[4]

The Cooper’s Hawks are monogamous and most mate for life. Pairs will breed once a year and raise one brood per breeding season. Courtship displays include stylized flights with the wings positioned in a deep arc. During their flight displays the male will begin by diving toward the female. A slow speed-chase follows involving the male flying around the female exposing his expanded under tail coverts to her. The male raises his wings high above the back and flies in a wide arc with slow, rhythmic flapping. Courting usually occurs on bright, sunny days, in midmorning.[9] After pairing has occurred, the males make a bowing display before beginning to build the nest.[5]

Their breeding habitats are forested areas. The breeding pair builds a stick nest in large trees. Over a two week period the pair builds the nest. The nests are piles of sticks around 27 inches in diameter and 6- 17 inches high with a cup- shaped depression in the middle that is 8 inches across and 4 inches deep. Their nests are built in pines, oaks, Douglas- firs, beeches, spruces, and other tree species usually on flat ground rather than on a hillside. The nests typically are about 25–50 feet high off the ground, halfway up the tree, and out on a horizontal branch.[5] The clutch size is usually 3 to 5 eggs. The cobalt-blue eggs average about 48 x 38 mm (1.9 x 1.5 in) and weigh about 43 g (1.5 oz). The female incubates the eggs between 30 to 36 days.[4] The hatchlings are about 28 g (1 oz) and 9 cm (3.8 in) long and are completely covered in white down.[5] They are brooded for about two weeks by the female, while her mate forages for food. The fledging stage is reached at 25 to 34 days of age, though the offspring will return to the nest to be fed until they become independent around 8 weeks. Eggs and nestlings are preyed on, rarely, by raccoons, crows as well as other competing Cooper's Hawks. Adults rarely fall prey to Red-tailed Hawks, Great Horned Owls, Eurasian Eagle Owls, Peregrine Falcons, Golden Eagles, and Northern Goshawks.[4]

Cooper’s Hawks communicate using vocalizations and displays. Vocal is probably preferred over display, because the denseness of their habitat could prevent displays from being seen from a distance. Males are usually submissive to females and will listen for reassuring call notes the females make when they are willing to be approached.[10] The males have a higher pitched voice than females.[4]

Cooper’s Hawks have been known to live as long as 12 years in the wild. However, the oldest known living hawk was 20 years and 4 months old.[4] 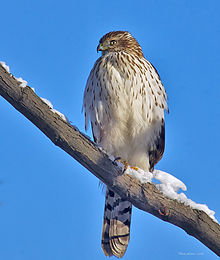 At one time, Cooper's Hawks were heavily hunted in persecution for preying on poultry and were called "chicken hawks". It is now known that predation by these hawks on domestic animals borders are negligible, and they are rarely hunted these days. Cooper's Hawks' breeding success was also reduced by the use of the pesticide DDT, but the ban of DDT ended that threat.[10] Since then, the adaptable Cooper's Hawk has thrived. However, one threat facing Cooper’s Hawks today is the degradation and loss of habitat. Management activities like logging may make their former habitat unsuitable for breeding.[4]