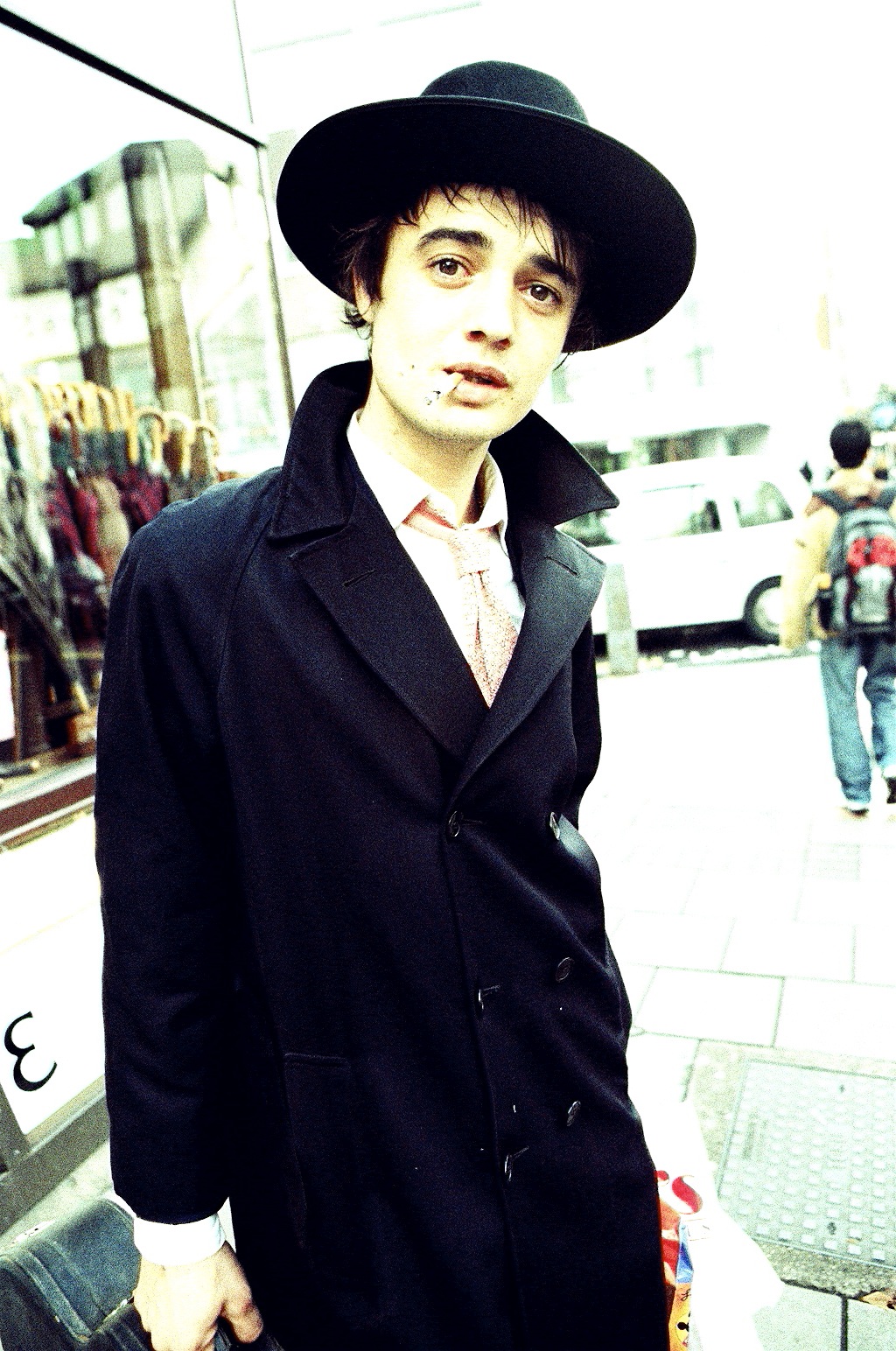 Peter Doherty (born , ) is an English , , published and . He is currently a singer and songwriter in the band , but first came to fame with , alongside . In 2005, Doherty became prominent in tabloids, the news media, and pop culture blogs because of his romantic relationship with and his well-publicised drug use.

Peter Doherty was born in , , , the son of Jacqueline (Michels), who was of paternal ish descent, and Peter John Doherty, who was of Irish descent.

After his A-levels, he moved to his grandmother's flat in —where he said he felt 'destined' to be—and got a job filling graves in Willesden Cemetery, although most of his time was spent reading and writing while sitting on gravestones.

Doherty and Barât formed a band called The Libertines in the late '90s, although it was not until 2002, with the release of their debut album "", that they began to achieve widespread mainstream success.

The group achieved critical and commercial success and gained a dedicated cult following, with Doherty in particular being praised by fans and critics alike as one of the most promising songwriters to emerge on the British music scene for some time. However, Doherty's increasing drug problems led to his estrangement from the band. In 2003, he was jailed for burgling Barât's flat.

The two initially fell out over this incident, but made amends whilst Doherty was in prison. He was originally sentenced to 6 months, but his sentence was cut to 2 months. Upon his release, Doherty immediately reunited with Barât and the rest of the band to play a gig in the Tap 'n' Tin pub in Chatham, Kent.

Following his rejoining of the band, Doherty sought treatment for his drug addiction. He attended the alternative detox centre , a temple in Thailand, famous for its rehabilitation program for crack and users, where he was beaten with a bamboo cane and forced to drink foul herbal concoctions to induce vomiting. He left after three days and returned to England.

However, while post-production work was taking place on the second Libertines album (also called "The Libertines") in June 2004, Doherty was again asked to leave the band. The band cited Doherty's continuing drug addiction as the reason for his dismissal, but emphasised their willingness to take him back once he had addressed his addiction. Although Barât had previously stated that the Libertines were merely on hiatus, pending Doherty's recovery, the group effectively disbanded with Doherty's departure at the end of 2004. All members are now involved in other projects (see Yeti and Dirty Pretty Things).

Prior to the disbanding of The Libertines, Doherty collaborated with local poet Wolfman. Together they recorded the single "", which entered the top 10, charting at number 7, in April of the same year. Despite the success of the single, which was nominated for a prestigious "Ivor Novello Award" for songwriting,

Later in 2004, Doherty provided guest vocals to the song "Down to the Underground" by the British group Client. The song was released in June 2004 as a B-side to the group's single "In It for the Money" [cite news
title=Pete finds new client!
date=
accessdate=2007-05-12
publisher=NME.com
url=http://www.nme.com/news/client/16803] and appears on their second album "City".

In 2005 Doherty collaborated with the British rock band on the single "Their Way". [cite news
title=Doherty records with The Littl'ans
date=
accessdate=2007-05-12
publisher=contactmusic.com
url=http://www.contactmusic.com/new/xmlfeed.nsf/mndwebpages/doherty%20records%20with%20the%20littlans]

In 2006, Doherty was featured on the charity single "Janie Jones", which was released to raise funds for . A number of artists and bands, such as Dirty Pretty Things, , and , also featured on the track.

In August 2006 it was announced that Doherty was recording with frontman Mike Skinner on a new version of "", from Skinner's album "". [cite news
title=Pete Doherty and The Streets record drugs anthem
date=
accessdate=2007-05-12
publisher=NME.com
url=http://www.nme.com/news/streets/23863]

Doherty founded Babyshambles towards the end of his time with The Libertines. The group has released two studio albums, "", in November 2005 and "" in October 2007. The band's touring schedule and releases have occasionally been disrupted by Doherty's ongoing legal problems.

In August 2006, Babyshambles signed up with major record label , on which they released "" on to good critical acclaim.

Doherty has been working on new acoustic material, similar to the wealth of his unreleased songs that can already be downloaded on the internet. [NME Magazine - various issues] On his own, and often with his band, he has continued ' tradition of performing on short notice s in small venues.

In June 2006, Doherty announced that he had signed a deal with Orion Books to publish his journals, in which he had recorded poetry, drawings, and photos over the course of his career.

On May 15th, 2007, Doherty exhibited his paintings for the first time. The art exhibition took place at the London's Bankrobber Gallery, and was on show for one month. The collection featured 14 paintings. [ [http://www.starpulse.com/news/index.php/2007/05/16/pete_doherty_s_bloodworks_exhibition_ope Pete Doherty's Bloodworks Exhibition Opens In London - Starpulse Entertainment News Blog ] ]

For a whole month, from the 25th of April to the 25th of May 2008, an exhibition of Doherty's paintings, titled "Art Of The Albion", took place at the Chappe Gallery in . [ [http://www.gigwise.com/news/42662/pete-doherty-launches-new-blood-exhibition-in-paris GIGWISE, Pete Doherty Launches New Blood Exhibition In Paris ] ] The art exhibition caused controversy because of the art works being made with Doherty's own blood. According to newspapers, anti-drug campaigners were enraged and accused Doherty of glamorising illegal substance abuse. [ [http://economictimes.indiatimes.com/Personal_Finance/Art_/Art_exhibition_by_Doherty_causes_controversy/rssarticleshow/2987458.cms Art exhibition by Doherty causes controversy- Art -Personal Finance-The Economic Times ] ] Art experts didn't seem to be impressed as well. David West, the owner of London's , slammed Doherty's work: "It's not got any artistic merit. He's using his blood to make them interesting, but when you look at them they're what any four-year-old can do." [ [http://in.movies.yahoo.com/news-detail/24362/Art-exhibition-Doherty-causes-controversy.html Art exhibition by Doherty causes controversy | Hollywood News - Yahoo! India Movies ] ]

Following in the footsteps of model and ex-fiancée , Doherty has become the current face of 's Fall 2007/2008 fashion advertising campaign. The photos have gained praise for depicting a much cleaner and more handsome Doherty. The '50s-style photographs are also being compared to images of the late . [cite web |url=http://www.telegraph.co.uk/news/main.jhtml?xml=/news/2007/06/25/nmoss125.xml |title=Doherty becomes fashion contender for Moss |accessdate=2007-06-29 |last=Alexander |first=Hilary |authorlink=Hilary Alexander |date= |work=]

Doherty is also known to be a devoted follower of Queens Park Rangers football club. As a youth he wrote a fanzine, entitled "All Quiet on the Western Avenue". He sold copies of the fanzine on the club's grounds, but its mixture of literary references, quotes, poetry and football stories proved unsuccessful with the other fans.

A frequent lyrical theme for Doherty is , the ancient name for . Doherty also uses 'Albion' as the name of a ship sailing to a utopia called Arcadia, a place without rules or authority. Doherty and Barât shared a flat in London, at 112a Teesdale Street, , affectionately known as 'The Albion Rooms', despite being rather run down. Doherty named his diaries, in which he writes poems and other thoughts, the "".

Doherty has been repeatedly arrested for drug offences and those arising from drug misuse, such as , car theft

On February 2nd, 2005, Doherty was arrested after an altercation with documentary filmaker , who was making a about the singer and sold photos of a heroin smoking Doherty to the tabloids. Doherty and his friend had been charged with robbery and blackmail. On February 7th Doherty was released on bail after his record company Rough Trade put up £150,000 in bonds. [ [http://www.xfm.co.uk/Article.asp?b=news&id=65780 Pete Doherty Gets Conditional Bail - Xfm ] ] [ [http://www.antimusic.com/news/05/feb/item18.shtml Pete Doherty Released From Jail - antiMusic News 2005 ] ] All charges against him were later dropped by the Crown Prosecution Service due to a lack of evidence. [ [http://www.guardian.co.uk/uk/2005/apr/12/arts.artsnews Pete Doherty's charges dropped | UK news | The Guardian ] ]

On April 8, 2008, Doherty was jailed for 14 weeks by a court for breaching a probation order after a string of brushes with the law for drugs and driving offenses. On the April 18, 2008, he was moved to a private area of Wormwood Scrubs prison after learning that fellow inmates were planning to attack him, therefore making it safer for the singer. On 6 May, 2008, he was released after his sentence was cut in half and further 18 days were remitted due to a government plan to reduce overcrowding. He also had another 2 days off for being in police custody (after serving just over 4 weeks of a 14-week sentence). He described prison life as "a lot of gangsters and Radio 4" and showed a certificate confirming he had passed a while inside.

Doherty's most successful attempt to fight his drug addiction was in September 2007, when he underwent rehab for six weeks at . [cite news
url = http://news.bbc.co.uk/2/hi/uk_news/england/london/7023339.stm
title = BBC News "Doherty gets chance to kick drugs"
accessdate = 2008-09-07
date = ] However, Doherty relapsed in November 2007 following his appearance at the in . [cite news
url = http://news.bbc.co.uk/2/hi/entertainment/7082897.stm
title = BBC News "Doherty owns up to drug relapse"
accessdate = 2008-09-07
date = ] Since then Doherty often claimed he would've finally gotten clean of drugs. In September 2008 Andy Boyd, Doherty's manager, claimed in aninterview with the that Doherty did not get off heroin. Boyd stated: "The only time I can be sure he’s not doing heroin or crack is when he’s in rehab or prison or asleep." and implied that when Doherty had an implant fitted, which blocks the body’s opiate receptors, he replaced heroin with another drug. [cite news
url = http://www.mailonsunday.co.uk/moslive/article-1051663/Pete-Doherty-Taking-Libertine.html
title = "Pete Doherty: Taking the Libertine - HIS MANAGER SAYS..."
accessdate = 2008-09-07
date = ]

After numerous attempts to convince him to start a serious rehab, in early 2005 Doherty's father decided that he was tired of broken promises and vowed never to see his son until he was clean of drugs. The sensitivity surrounding the issue became apparent in the "Arena" documentary about Doherty, on , which included footage of him talking about this aspect of his personal life. He was visibly upset and had to politely ask the interviewer at one point to stop filming. In October 2007, Doherty said in an interview with show, "Front Row", that he had reconciled with his father after 3 years of no contact when his father came to visit him in rehab. [cite web |url=http://news.bbc.co.uk/1/hi/entertainment/7042330.stm |title=Doherty 'at drugs turning point' |accessdate=2007-11-02 |date= |publisher=]

Doherty has had a tumultuous relationship with , frequently covered by the press. They met in January 2005 at Moss' 31st birthday party and have had an on-off relationship since. Moss has also taken to singing at some of Doherty's shows.

Doherty has a son named Astile Louis Doherty (born Camden, London, 2003), [ [http://www.findmypast.com Births England and Wales 1984-2006] ] with singer . Doherty did not have much contact with his son until 2008. In an interview with the Doherty said, that he intentionally kept away from Astile because of the state Doherty was in. However, their relationship has become a closer one since then.

Doherty currently lives in a nine-bedroomed red-brick Georgian house on the outskirts of , - the house is leased from . Doherty chose to seek 'peace and quiet', and also because his probation order doesn't allow him to live in a residence with a postcode.

Albums with The Libertines

* "Down To The Underground" (Client, featuring Pete Doherty). Taken from the "City" album.