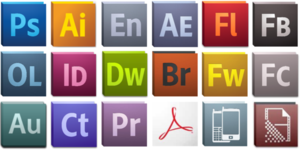 Icons of the core CS5.5 applications.

Brief descriptions of the applications in the various Adobe Creative Suite editions:

Below is a matrix of the applications that are bundled in each of the software suites for CS5:

Windows versions of Adobe Premiere CS5.5 and Adobe After Effects CS5.5 are 64-bit only and require at least Windows Vista 64-bit or a later 64-bit Windows version. Windows XP Professional x64 Edition is not supported.

Adobe Version Cue, an application that enabled users to track and manipulate file metadata and automate the process of collaboratively reviewing documents among groups of people, and the Adobe Creative Suite Web Standard edition, previously available in CS4, have been dropped from the CS5 line-up.

Adobe Encore and Adobe OnLocation (formerly Serious Magic DV Rack HD2) are included as part of Adobe Premiere Pro and are not released as standalone products.

Adobe InCopy, an application closely integrated with Adobe InDesign, is also part of the Creative Suite family, but is not included in any CS5 edition. It can be ordered from Adobe, third party plug-in developers, or systems integrators.

The first version of Adobe Creative Suite was released in September 2003[2] and Creative Suite 2 in April 2005.[3] The first two versions (CS and CS2) were available in two editions.

Adobe Creative Suite Production Studio (previously Adobe Video Collection) was a suite of programs for acquiring, editing, and distributing digital video and audio that was released during the same timeframe as Adobe Creative Suite 1. The suite was available in standard and premium editions.

The Standard edition consisted of:

Core applications from Macromedia Studio have been merged with Adobe Creative Suite since CS3, including Flash, Dreamweaver, and Fireworks. Some Macromedia applications were absorbed into existing Adobe products, e.g. FreeHand has been replaced with Adobe Illustrator. Director and ColdFusion are not part of Adobe Creative Suite and will only be available as standalone products. The final version of Macromedia Studio released include:

Adobe Creative Suite 3 (CS3) was announced on March 27, 2007; it introduced universal binaries for all major programs for the Apple Macintosh,[4] as well as including all of the core applications from Macromedia Studio and Production Studio.

Adobe began selling CS3 applications in six different combinations called "editions." Design Standard & Premium and Web Standard & Premium began shipping on April 16, 2007, and Production Premium and Master Collection editions began shipping on July 2, 2007. The latest released CS3 version was version 3.3, released on June 2, 2008. In this version Fireworks CS3 was included in Design Premium and all editions that had included Acrobat 8 Pro had it replaced with Acrobat 9 Pro.[6] Below is a matrix of the applications included in each edition of CS3 version 3.3:

Adobe dropped the following programs (that were previously included in CS2) from the CS3 software bundles:[7]

Adobe Creative Suite 4 (CS4) was announced on September 23, 2008 and officially released on October 15, 2008.[8] All applications in CS4 featured the same user interface, with a new tabbed interface for working with concurrently running Adobe CS4 programs where multiple applications can be opened inside multiple tabs contained in a single window.[9]

Adobe CS4 was also developed to perform better under 64-bit and multi-core processors. On Windows, Adobe Photoshop CS4 ran natively as a 64-bit application. Although they were not natively 64-bit applications, Adobe After Effects CS4 and Adobe Premiere Pro CS4 have been optimized for 64-bit computers.[10] However, there were no 64-bit versions of CS4 available for Mac OS X.[11] In early testing of 64-bit support in Adobe Photoshop CS4, overall performance gains ranged from 8% to 12%, due to the fact that 64-bit applications could address larger amounts of memory and thus resulted in less file swapping — one of the biggest factors that can affect data processing speed.[12]

Two programs were dropped from the CS4 line-up: Adobe Ultra, a vector keying application which utilizes image analysis technology to produce high quality chroma key effects in less than ideal lighting environments and provides keying of a subject into a virtual 3D environment through virtual set technology, and Adobe Stock Photos. Below is a matrix of the applications that were bundled in each of the software suites for CS4:

Following the release of CS5 in April 2010, Adobe changed its release strategy to an every other year release of major number installments. CS 5.5 was presented on April 12th, 2011, as an in-between program. The update helps developers optimize websites for a variety of tablets, smart phones, and other devices. At the same time, Adobe announced a subscription based pay service as an alternative to full purchase.[13]

On July 1, 2011, Adobe Systems announced its Switcher Program, which will allow people who have purchased any version of Apple's Final Cut Pro (or Avid Media Composer) to receive a 50 percent discount on Creative Suite CS 5.5 Production Premium or Premiere Pro CS 5.5.[14]

During an Adobe conference call on June 21, 2011, CEO Shantanu Narayen said that the April 2011 launch of CS5.5 was "the first release in our transition to an annual release cycle," adding, "We intend to ship the next milestone release of Creative Suite in 2012, and it will include an updated version of Photoshop."[15] A person posting as an Adobe employee on Adobe's forum said on May 27, 2011, that "CS6 is scheduled for release around May 2012."[16]