Mariachi
This article is about the musical genre. For the film, see El Mariachi.

Mariachi is a genre of music that originated in the State of Jalisco, in Mexico. It is an integration of stringed instruments highly influenced by the cultural impacts of the historical development of Western Mexico. Throughout the history of mariachi, musicians have experimented with brass, wind, and percussion instruments. In addition, sociohistorical factors have influenced the repertoire in terms of the performance of diverse regional song forms as well as the evolution of the performance attire. Mariachi is important to the study of Mexican music because, as an ensemble created during the colonial period, it found its essence during the postcolonial era, blossomed during the nationalist era, and has made a global impact in contemporary times. Throughout this development, particularly since the nationalist era, mariachi music has become emblematic of Mexican music by appropriating various Mexican regional song forms, experimenting in popular radio programs, appearing in the earliest Mexican films, and performing during presidential campaigns (Loza 1993, Turino 2003, Sheehy 2005, de la Mora 2006, Jáuregui 2007).

The mariachi ensemble generally consists of violins, trumpets, a classical guitar, a vihuela (a high-pitched, five-string guitar), a guitarrón (a large acoustic bass guitar) and, on occasion, a harp. The musicians dress in silver-studded charro outfits with wide-brimmed hats. The original Mariachis were Mexican street musicians or buskers,[1] but many today are professional entertainers making paid appearances in the entertainment industry. Professionals can usually play more than one instrument, and all can sing. They sometimes accompany ranchera singers such as Vicente Fernández or even pop star Luis Miguel. Although ranchera singers dress in a traje de charro (Charro suit), they are not considered mariachis. Mariachi music, as well as other forms of traditional Mexican music, is also noted for the grito mexicano, a yell done at musical interludes within a song, either by the musicians or the audience. 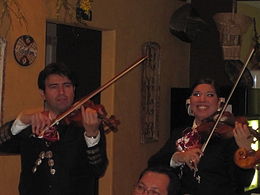 Although mariachis play at events such as weddings and formal occasions such as a quinceañeras (a girl's fifteenth birthday celebration), they are often used to serenade women because many of the songs have romantic lyrics. Trios of mariachis may be found for hire to seranade; the best known venues are the Plaza de los Mariachis in Guadalajara and the Plaza Garibaldi in Mexico City). Mother's days are also a popular occasion for mariachis. Prices vary immensely and are seldom cheap.

Foreign tourists often confuse mariachis with other types of buskers seen in Mexico, such as the jarochos, typical of the State of Veracruz, or "norteño" bands, which come from the Northern states of Mexico. The term Mariachi refers only to musicians who dress and play in a style typical of Jalisco, though the style and music has spread far. Usually a guitarrón and a vihuela must be present for a group to be considered mariachi.

Mariachis playing at the Tenampa in Mexico City

Current mariachi instrumentation includes a guitarrón, a vihuela, a guitar, violins, and trumpets. Some groups might use a guitarra de golpe (a guitar mid-way in size and tone between the guitarrón and vihuela), a mariachi harp or even a flute. Since the 1970s some singers have occasionally added other instruments such as accordion, organ, keyboard, harmonica, saxophone and even drums, although they were considered additions, never part of the mariachi instrumentation itself. During the last years some artists have made fusions of mariachi with orchestra and percussion, giving birth to a Mariachi/pop ballad crossover style.

A complete mariachi group has as many as eight violins, two trumpets, and a guitar. The vihuela is a high-pitched, round-backed guitar-like instrument that gives the Mariachi its typical rhythmic vitality. The guitarrón is a deep-voiced guitar that serves as the bass of the ensemble. The mariachi harp usually doubles the bass line, but may also ornament the melody. These latter three instruments have European origins, but their present forms are strictly Mexican. 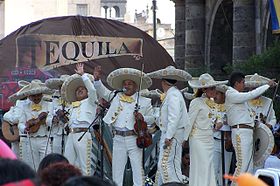 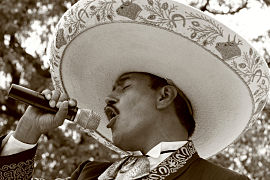