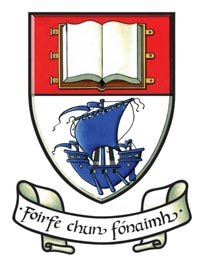 Waterford Institute of Technology (WIT) is a state funded third-level educational institution situated in the city of , Ireland. The Institute has six Schools and 16 Departments.

At the time of the founding of the RTC, there were two other third-level level institutions in the city, St John’s Seminary [ [http://archives.tcm.ie/waterfordnews/2004/01/23/story13295.asp Waterford News and Star which notes the closing of the St John's Seminary in 1999] ] and De La Salle Brothers [ [http://www.golftravelireland.net/accommodations/Faithlegg_House_Hotel.htm Reference to Faithlegg being a novitiate college] ] teacher training college, but both had been closed.

Waterford politicians made strenuous but unsuccessful efforts to locate a university in Waterford at the time of the formation of the in the 1840s. The cause was led by , Waterford’s then , who was perhaps chosen unwisely as he was not influential in Parliament, having strong Napoleonic links (he married a niece of of France), being a Catholic and leaning towards an independent Ireland. , a much smaller city at the time, won out over Waterford, perhaps because of the necessity for geographical dispersion or to bolster the . Wyse wrote in the round on the matter in his text "Education reform or the necessity of a national system of education" (London, 1836).

Since 2001 Institute has conferred its own awards at all levels from Higher Certificate to PhD, subject to standards set and monitored by the Higher Education and Training Awards Council () which was established by the Government in June 2001, under the Qualifications (Education and Training) Act, 1999. [cite web|url=http://www2.wit.ie/AboutWIT/
title=AboutWIT
accessdate=2008-05-21] In October 2005 the institute was selected by the The Sunday Times newspaper as the "Institute of Technology of the Year" in Ireland.

The College Street Campus is the second largest campus currently. The buildings were purchased from the Good Shepherd Order of Nuns. The once convent houses a beautiful -designed chapel which is used for concerts and ceremonies. The Humanities and Education schools are officially located here, but are in reality spread between this and the main campus.

The Applied Technology Building, which is on lease from IDA Ireland, is located in Waterford’s Industrial Estate. This is just a 2 minute walk from the back of the main campus. While thought by most students to be a “spill-over” of the main campus, due to its close proximity, it is officially a separate campus. It houses engineering workshops and technology based facilities as well as the Careers Centre and the Engineering Research area.

The Carriganore campus, or west campus, is located outside the city near the Waterford Bypass. It is the goal of the Institute that this campus become the colleges main campus in years to come.

The Institute is divided into 6 schools and divided between these schools is 16 departments. A full list of these is below.

Schools and Departments of the institute

Research within the institute

A significant portion of the institute's students live in , which adds to the levels of participation in the social and cultural life of the college. These include Riverwalk and Manor Village.

The quest for university status

The institute formally applied in 2006 for university status in accordance with the Universities Act, 1997 [http://www.waterford-today.ie/index.php?id=17596&what=1&issue=291] , and the process of examining the case for redesignation has commenced. In January 2007 Dr Jim Port was engaged by the government to carry out a "preliminary assessment" of the institute's case. [http://www.unison.ie/irish_independent/stories.php3?ca=50&si=1731008&issue_id=14935] .