Rock candy (also called rock sugar) is a type of confectionery mineral composed of relatively large sugar crystals. This candy is formed by allowing a supersaturated solution of sugar and water to crystallize onto a surface suitable for crystal nucleation, such as a string or stick. Heating the water before adding the sugar allows more sugar to dissolve thus produces larger crystals. Crystals form after 6–7 days. Food coloring may be added to the mixture to produce colored candy. 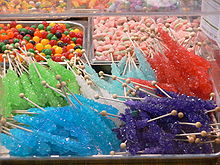 Candied sugar has its origins in India and Iran. It has several different names in India among which are Panakarkandu or Kalkandu (kal - rock, kandu - candy) (Tamil/Malayalam), "khadi sakhar" (Marathi), mishri (Hindi)[1] and kalakanda/patika bellam (Telugu); the Persian word for rock candy is "nabaat". Arabic writers in the first half of the 9th century described the production of candy sugar, where crystals were grown as a result of cooling supersaturated sugar solutions. In order to accelerate crystallization, confectioners later learned to immerse small twigs in the solution for the crystals to grow on. The sugar solution was colored with cochineal and indigo and scented with ambergris or flower essence.[2]

Rock candy is often dissolved in tea. It is an important part of the tea culture of East Frisia in Germany, but is also used in many nations, such as Hungary.[3] In China, it is used to sweeten Chrysanthemum tea as well as Cantonese dessert soups and the liquor baijiu. In fact, in some provinces of China rock sugar or bing tang is used in many dishes including meat, fish, chicken and vegetables as well as some fruits. It is also viewed traditionally as having medicinal properties and is prepared in food as yao shan or literally medicine food. In less modern times, rock sugar was affordable to only the rich.

Rock candy is widely used in India with aniseed as a mouth freshener, especially after meals, and is a common ingredient in Tamil cuisine, particularly in the Sri Lankan city of Jaffna.

In the Friesland province of the Netherlands, bits of rock candy are baked in the luxury white bread Fryske Sûkerbôle.