Opul Lun Sat-Yr-9 was a dictator who ruled Earth-794 with her lover Kaptain Briton. When he fled from her, traveling to Earth-616 where he knew he had an identical looking counterpart, Earth-616's Captain Britain, she sent armored troops to retrieve him. They mistakenly attacked Captain Britain twice, but were repelled on each occasion, the first time by Britain and his ally Meggan, the second by Britain's sister Betsy. Sat-Yr-9 next hired the interdimensional mercenary group, the Technet, but Briton swapped places with Britain, and the Technet took the wrong man back to Earth-794.[1] Britain later convinced the Technet of their error, but Sat-Yr-9 tried to stop them departing with him; the Technet slaughtered her soldiers, and the already psychotic Sat-Yr-9 became completely unhinged.[2] After they departed, she started slaughtering her subjects, leading Roma to send Captain UK on a mission to overthrow and imprison her.[3]

While Britain was on Earth-794, Briton was killed by Betsy when he tried to rape her.[4] 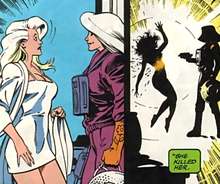 Escaping to Earth-616 through a dimension gateway that had been opened by Widget for an unassuming civilian on Earth-616, Sat-Yr-9 incinerated her alternate reality counterpart, a businesswoman named Courtney Ross, and took her place.[5] An example of interdimensional similarities, Ross was Captain Britain's ex-girlfriend. As Ross, she tried to create a rift between Captain Britain and his current girlfriend Meggan.

Sat-Yr-9 also knew about Jamie Braddock's reality warping powers before anyone else did (including Jamie himself), since she knew about the reality warping powers of Jamie's alternate reality counterpart in her timeline of origin. This seeming Ross challenged Nigel Frobisher to a high stakes card game at the London Hellfire Club, and won. Frobisher agreed to serve her, and she ordered him to engage the Technet to rescue the imprisoned Earth-616 Jamie Braddock from Doc Croc, intending to use his great powers as a living weapon against difficult adversaries.[6] This seeming Ross later took Kitty Pryde under her guidance.[7] She enrolled Kitty in the St. Searle's School for Young Ladies, and arranged a deal to save St. Searle's from bankruptcy.[8]

She used Jamie's powers to change Frobisher into a duplicate of the London Crime Vixen, while changing Vixen herself into a fox. With Frobisher as Vixen, Sat-Yr-9 took over the Vixen's crime syndicate.[volume & issue needed]

With her powerbase built, she attacked Excalibur, revealing her true identity to them. She tried to enslave Captain Britain, against Frobisher's advice. Frobisher rebelled and was killed by her. Excalibur managed to defeat Jamie, and Sat-Yr-9 and her troops were forced to flee.[volume & issue needed] Captain Britain swore to avenge Courtney's death, but was unable to track Sat-Yr-9 down.

After the events of House of M, Sat-Yr-9 appeared once again under the alias of "Courtney Ross", she has joined the Hellfire Club as its White Queen, with Viper, a former HYDRA assassin, as her self-proclaimed "White Princess" and bodyguard. She has been seen publicly appearing as Courtney Ross again, trying to convince Captain Britain that she somehow is the real Courtney Ross. So far Captain Britain remains unconvinced, but hasn't moved against her.