All Over the Guy

All Over the Guy

Infobox_Film
name = All Over the Guy 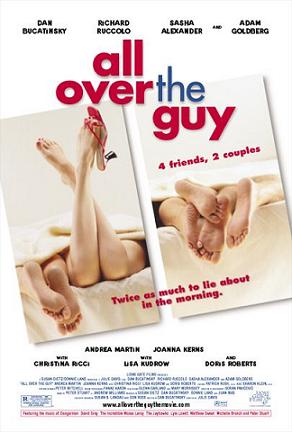 "All Over the Guy" is an American -themed film directed by in 2001.

"All Over the Guy" is about Eli () and Tom (). The film is told mostly in flashback, with Eli recounting his side to Esther (), an clinic worker as he waits for test results and Tom to a guy he meets at an meeting. Tom is the adult child of emotionally distant alcoholic parents. Eli's parents are both psychologists who raised him to be emotionally open but ended up making him neurotic.

Tom and Eli are set up on a by their best friends, Jackie () and Brett (), who think they would be a perfect match. They're both looking for 'The One', but don't recognize it when they find it. On the date, a boring evening is broken up only by an amusing diatribe by Tom against the movie "". A few days later they run into each other at a and hit it off, winding up back at Eli's place where Tom spends the night. The next morning Tom says that it was a mistake.

Jackie and Brett decide to try again to set them up, and the two men start to develop a relationship. Tom's fear of becoming emotionally close coupled with Eli's own insecurities makes it difficult for them to maintain, but Jackie and Brett get engaged which forces Tom and Eli together. They disguise their unease behind petty arguments over meaningless details of grammar and pronunciation but are finally able to push past the pettiness and make love. Eli tells Tom he loves him and Tom, terrified, lashes out at him the next day and drives him away.

The flashbacks end here on the day of Brett and Jackie's wedding. Esther tries to teach Eli to be more understanding of Tom's emotional needs. The AA member tries to sexually assault Tom, and when he tells Jackie she upbraids him for throwing Eli away for daring to fall for him. At the reception, Eli and Tom come to realize that they have to overcome their families' dysfunction and their own fears.