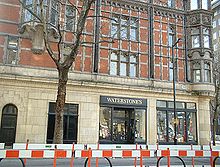 Dillons on Gower Street; now a branch of Waterstone's

For the CTN stores see Tesco and TN Retail

Dillons was a bookshop and subsequently a bookselling chain, based in the United Kingdom, which traded between 1932 and 1999.

Founded by Una Dillon (1903–1993) in 1932, Dillons was for most of its history most closely associated with its signature building on Gower Street in London, near University College London, which Dillon bought out from a previously failing bookseller in 1936. She subsequently sold the company to the University of London in 1956.

Back in private hands by the mid-1980s, the store undertook a major makeover and modernisation, announcing its relaunch with the cheeky advertising poster "Foyled again? Try Dillons" – displayed prominently on the bus shelter opposite its London rival Foyles.

Inspired by the success of Waterstone's, demonstrating the potential for large modern bookshops with a depth of stock, the new owners rapidly rolled out the format across the country, ultimately building up a chain of 75 stores. However the holding group Pentos PLC had overreached itself financially, and in 1995 the Dillons business was acquired by HMV.

In 1998 HMV also acquired the larger Waterstone's chain, and the next year the Dillons brand ceased to exist as a separate entity. The majority of branches were rebranded as Waterstone's, while a remainder were sold on to the smaller chain Ottakar's, which itself was later taken over by Waterstone's in 2006.