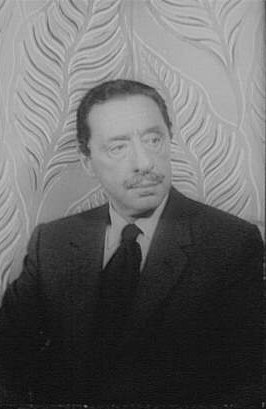 Harold Arlen (, – , ) was an American of popular music. Having written over 400 songs, a number of which have become known the world over, Arlen is a highly regarded contributor to the .His 1938 song "” was voted the twentieth century's No. 1 song by the Recording Industry Association of America [http://www.haroldarlen.com/honors.html [1] .

Arlen was born Hyman Arluck, in , the child of a Jewish cantor. His twin brother died the next day. He learned the as a youth and formed a band as a young man. He achieved some local success as a pianist and singer and moved to in his early 20s. He worked as an accompanist in vaudeville. [Laurie, Joe, Jr. "Vaudeville: From the Honky-tonks to the Palace." New York: Henry Holt, 1953. p. 328.] At this point, he changed his name to Harold Arlen. He performed on record with the "Buffalodians" orchestra, as well as those of , Henny Hendrickson and Arnold Johnson.

Between 1926 and about 1934, Arlen appeared occasionally as band vocalist on records by , , , and , usually singing his own compositions.

In 1929, Arlen composed his first well-known song: "Get Happy" (with lyrics by ). Throughout the early and mid-1930s, Arlen and Koehler wrote shows for the Cotton Club, a popular Harlem night club, as well as Broadway musicals and Hollywood films. Arlen also continued to perform with some success, most notably on records with Leo Reisman's society dance orchestra.

Arlen's compositions have always been popular with musicians because of his facility at incorporating a feeling into conventional American popular songs.

Arlen and Koehler wrote several hit songs during the early and mid-1930s.

In the mid-1930s, Arlen married, and spent increasingly more time in California, writing for movie musicals. It was at this time that he began working with lyricist . In 1938, the team was hired by to compose songs for "The Wizard of Oz". The most famous of these is the song "" for which they won the Academy Award for Best Music, Original Song. They also wrote "Down with Love", a song later featured in the 2003 movie "".

Arlen was a longtime friend and former roommate of actor who would star in "The Wizard of Oz", the film for which "Over the Rainbow" was written.

1923 (18) With his new band - The Southbound Shufflers, performed on the Crystal Beach lake boat "Canadiana" during the summer of 1923.

1924 (19) Wrote his first song, collaborating with friend Hyman Cheiffetz to write "My Gal, My Pal". Copyrighting the song as "My Gal, Won't You Please Come Back to Me?" and listed lyrics by Cheiffetz and music by Harold Arluck.

1928 (23) Chaim (Life) (or Hyman) Arluck renames himself Harold Arlen, a name that combined his parents' surnames (his mother's maiden name was Orlin).

1929 (24) Signed a yearlong song writing contract with the George and Arthur Piantadosi firm.

1951 (46) His wife Anya was institutionalized in a sanitarium for 7 years after repeatedly threatening her husband and others with physical harm.

1954 (49) The Musical "A Star is Born" starring singing the now classic, Harold Arlen and collaboration, ""

1954 (49) Becomes dangerously ill with a bleeding ulcer and is hospitalized but recovers to work with on the musical "House of Flowers".

1956 (51) His mother Celia Arluck dies and Harold doesn't touch music for over a year, mourning her loss.

1970 (65) Arlen's wife dies from a brain tumor. Arlen begins to lose interest in life, withdrawing from friends and family and becoming more and more reclusive.