Modern Art Museum of Fort Worth

Modern Art Museum of Fort Worth 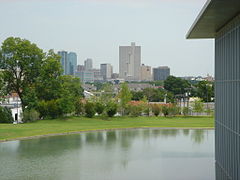 This image is taken from the deck of The Modern, looking over the new reflecting pool toward downtown Fort Worth.

The Modern Art Museum of Fort Worth (widely referred to as The Modern) was first granted a Charter from the State of Texas in 1892 as the "Fort Worth Public Library and Art Gallery", evolving through several name changes and different facilities in Fort Worth. It is the oldest art museum in the state of Texas.[1] The mission of the museum is "collecting, presenting and interpreting international developments in post-World War II art in all media."[1]

The Modern's first facility was a gallery space located within the newly-built Carnegie Public Library, which opened in downtown Fort Worth in 1901. The museum primarily showed traveling exhibitions and temporary loans during the 1930s and early 1940s, but with the help of the Fort Worth Art Association and what would eventually become the present-day Director's Council, a small permanent collection was slowly accumulated. The first purchase for the permanent collection was Approaching Storm (1875) by George Inness.[1]

In 1954, the institution moved to a building west of downtown, in the area that would soon become known as the Fort Worth Cultural District. Now known as the "Fort Worth Art Center", the building was designed by Bauhaus architect Herbert Bayer. The museum's permanent collection continued to grow, as evidenced by the notable purchases of Pablo Picasso's Vollard Suite in 1966 and Reclining Woman Reading (1960), also by Picasso, in 1967.[1]

By July 1996, the museum had acquired a 10.96 acre parcel of land across from the Kimbell Museum for the creation of a new building, and in September of 1996, the Modern's Long Range Planning and Architectural Review Committee announced that six internationally prominent architects had been invited to submit design proposals for the new building.[2] These architects were Tadao Ando, Richard Gluckman, Arata Isozaki, Carlos Jimenez, Ricardo Legorreta and David Schwarz.[2] The models created by each architect were on display at the museum for six weeks, giving the public an opportunity to comment on the designs. In April of 1997, Japanese architect Tadao Ando was selected as the favorite of both the building committee and the public.

Tadao Ando's new building for the Modern Art Museum of Fort Worth was opened to the public on Saturday, December 14, 2002. The building features four pavilions set into a reflecting pond. It was Ando's first major public building in the United States, and has become an architectural highlight of Fort Worth's Cultural District, along with the Amon Carter Museum (designed by Philip Johnson) and the Kimbell Museum (designed by Louis I. Kahn).[3] The structural engineering for the building was provided by Thornton Tomasetti. The building comprises a total of 153,000 total square feet, of which 53,000 square feet is gallery space. The building itself is composed of 22,335.35 cubic feet of cast-in-place concrete. The iconic Y columns are 40 feet tall. The building has a sculpture terrace, as well as a 250-seat auditorium and a climate-controlled vault space specifically built for the storage of paintings, sculpture, works on paper, and photography. The Modern Shop and Café Modern also compose integral parts of the building.

Tado Ando envisioned the new building "as a swan floating on water."[4] He also incorporated the Japanese concept of engawa, or a "space that brings together the inside and the outside", through the creation of glass gallery spaces which appear to "float" on the reflecting pond.[4] Ando wanted to create a "sense that you are almost standing on the water and that you are inside and outside at the same time—no visual boundaries."[4] Ultimately, Ando hoped that the building and its surrounding space would be seen as "an arbor for art."[4]

Two of the largest works in the permanent collection are sculptures installed outside of the building. The first, Richard Serra's Vortex (2002), is 67 feet tall and made from cor-ten steel. It is situated near the building's front entrance. The second sculpture, Roxy Paine's Conjoined (2006), is made of stainless steel and is located on the north side of the museum's reflecting pond.

110 Years: The Permanent Collection of the Modern Art Museum of Fort Worth