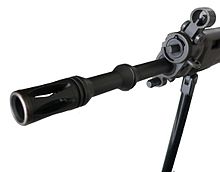 Two common types of flash suppressors are the duckbill and birdcage suppressors. Duckbill flash suppressors have upper and lower "prongs" and direct gases to the sides. Early M60 machine guns and some early M16 models featured this type of flash suppressor. One disadvantage is that the prongs can become entangled with vines or other natural vegetation and objects in the field. Birdcage types still have prongs, but also feature a ring on the front to prevent vegetation from entanglement between the prongs. Another type of flash suppressor is a flash moderator, such as used on some CAR-15 models. Some examples of cone-shaped hiders are on the Bren machine gun, the .303 Rifle No 5 Mk 1 "Jungle Carbine", and some models of the RPK and German MG3.

Pre-20th century rifle designs tended to have longer barrels than modern rifles. A beneficial side effect of the long barrel is that the propellant is completely burnt before the bullet leaves the barrel, usually resulting only in a puff of smoke from the muzzle. However, if the same weapon is "cut down", as is common in cavalry and jungle-combat adapted versions, the bullet would often leave the barrel before the powder was completely consumed. In this case, the still burning powder would emit a bright flash from the muzzle.

When barrel lengths were dramatically decreased with the introduction of various short-barrel rifles and carbines, this flash became a serious problem in terms of preserving night vision during combat. Originally limited to "special purpose" roles, it was now expected that all infantry weapons would have short barrels with this problem, and thereby be of limited use in night combat. Flash suppressors became common on late-World War II and later assault rifle designs, and are almost universal on these weapons today.

Military flash suppressors are designed to reduce the muzzle flash from the weapon to preserve the shooter's night vision, usually by directing the incandescent gases to the sides, away from the line of sight of the shooter, and to reduce the flash visible to the enemy. Military forces engaging in night combat are still visible when firing, especially with night vision gear, and must move quickly after firing to avoid receiving return fire. A comparison video of several flash suppressors, with and without night vision gear, can be found here.

Limiting the amount of powder to what the length of a barrel can burn is one possible solution, but differences between individual cartridges mean that some cartridges will always have too much powder to be completely consumed, and the reduced powder load produces a lower projectile velocity. Muzzle flash can also be controlled by using cartridges with a faster-burning propellant, so that the propellant gases will already have begun to cool by the time they exit the barrel, reducing flash intensities. Faster-burning powders, however, produce less projectile velocity, which reduces the accuracy due to introducing more of a parabolic bullet flight path in place of a "flat" trajectory while also reducing lethality of the weapon through reducing energy delivered on target.

Flash suppressors reduce, or in some cases eliminate, the flash by rapidly cooling the gases as they leave the end of the barrel. Although the overall amount of burning propellant is unchanged, the density and temperature are greatly reduced, as is the brightness of the flash.

A number of different flash hiding designs have been used. The simplest is a cone placed on the end of the barrel, which was used on the late-World War II jungle-combat versions of the Lee-Enfield, the No. 5 variant, intended for use in the Pacific. More modern solutions tend to use a "basket" with several slits or holes cut in it, as seen on the M16 and other small-bore weapons. Cone-shaped flash eliminators are also evident on the Bren LMG and on the turret-mounted aircraft machine guns of British WWII heavy bombers, which were used mostly at night.

Flash suppressors are often used as a muzzle brake as well by symmetrically cutting slits near the top - but not the bottom - of the hider, which then provides some downward-force on firing as the gases escape upwards, thereby reducing muzzle climb, as well as dust kick-up. This style of muzzle brake is commonly referred to as a compensator.

Flash suppressors are seen as a "military" feature, and semi-automatic long guns with suppressors were defined as Military-Style Semi-Automatics in 1992, requiring a permit.

Flash suppressors and barrel shrouds were seen as 'military' features, and were on the list of Federally defined features that could cause a rifle to be defined as illegal, if manufactured after the effective date of the Federal Assault Weapons Ban that went into effect in 1994 in the United States and which expired in 2004. Muzzle brakes, on the other hand, were ruled "legal" by the ATF. This meant, in practice, muzzle brakes had to be certified by the ATF to prevent end-users from accidentally violating the law and installing a device that could later be found to be defined legally as being more of a flash suppressor than a muzzle brake, even if marketed and sold as a muzzle brake, if incidental flash suppression was deemed to be 'significant' by the ATF. The Federal laws governing this sunsetted in 2004, and are no longer of concern, except in those few jurisdictions in which specific state laws still retain certain provisions of the earlier and now defunct Federal law.[citation needed]