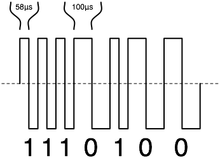 A short, mid packet, example of a DCC signal and its encoded bit stream

A DCC command station, in combination with its booster, modulates the voltage on the track to encode digital messages while providing electric power.

The voltage to the track is a bipolar DC signal. This results in a form of alternating current, but the DCC signal does not follow a sine wave. Instead, the command station quickly switches the direction of the DC voltage, resulting in a modulated pulse wave. The length of time the voltage is applied in each direction provides the method for encoding data. To represent a binary one, the time is short (nominally 58µs for a half cycle), while a zero is represented by a longer period (nominally at least 100µs for a half cycle).

Each locomotive is equipped with a mobile DCC decoder that takes the signals from the track and, after rectification, routes power to the motor as requested. Each decoder is given a unique running number, and will ignore all commands intended for a different decoder, thus providing independent control of locomotives anywhere on the layout, without special wiring requirements. Power can also be routed to lights, smoke generators, and sound generators. These extra functions can be operated remotely from the DCC controller. Stationary decoders can also receive commands from the controller in a similar way to allow control of turnouts, uncouplers, other operating accessories (such as station announcements) and lights.

In a segment of DCC-powered track, it is possible to power a single analog model locomotive by itself (or in addition to) the DCC equipped engines, depending on the choice of commercially available base systems. The technique is known as zero stretching. Either the high or the low pulse of the zero bits can be extended to make the average voltage (and thus the current) either forward or reverse. However, because the raw power contains a heavy AC component, DC motors heat up much more quickly than they would on DC power, and some motor types (particularly coreless electric motors) can be damaged by a DCC signal.

The DCC system was originally developed by Lenz Elektronik GmbH of Germany in the 1980s for two German model railway manufacturers, Märklin and Arnold (models). The first DCC digital decoders that Lenz produced appeared on the market early 1989 for Arnold (N) and mid 1990 for Märklin (Z, H0 and 1; Digital=).[1] Märklin and Arnold exited the agreement over patent issues, but Lenz has continued to develop the system. In 1992 Stan Ames, who later chaired the NMRA/DCC Working Group, investigated the Märklin/Lenz system as possible candidate for the NMRA/DCC standards. When the NMRA Command Control committee requested submissions from manufacturers for its proposed command control standard in the 1990s, Märklin and Keller Engineering submitted their systems for evaluation.[2] The committee was impressed by the Märklin/Lenz system and had settled on digital early in the process. The NMRA eventually licensed the protocol from Lenz and extended it. The system was later named DCC. The proposed standard was published in the October 1993 issue of Model Railroader magazine prior to its adoption.

The DCC protocol is the subject of two standards published by the NMRA: S-9.1 specifies the electrical standard, and S-9.2 specifies the communications standard. Several recommended practices documents are also available.

The DCC protocol defines signal levels and timings on the track. DCC does not specify the protocol used between the DCC command station and other components such as additional throttles. A variety of proprietary standards exist, and in general, command stations from one vendor are not compatible with throttles from another vendor. 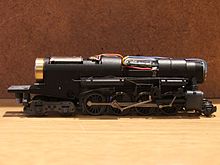 A DCC decoder installed in an N scale steam locomotive

The great advantage of using DCC over traditional DC systems is the simpler wiring needed to operate more than one locomotive at a time. Before, to operate more than one locomotive independently, the track had to be wired into separate "blocks" with switches selecting which controller powered which block of track. If an operator failed to switch control of a block before his locomotive entered, a short circuit or loss of control was possible. With DCC, many layouts can be wired as a single large block, and each operator can control his locomotive without worrying about crossing a block boundary.

DCC controllers can include an "inertia" simulation, where the locomotive will gradually increase or decrease speeds in a realistic manner without continuous inputs from the operator. Mobile decoders are available which will adjust the power to try to maintain a constant speed, again without burdening the operator. Most DCC controllers allow an operator to set the speed of one locomotive and then quickly select another locomotive to control its speed.

Recent developments include on-board sound modules for locomotives as small as N scale.

Wiring requirements are generally reduced compared to a conventional DC powered layout. With DCC control of accessories, the wiring is distributed to accessory decoders rather than all being connected to a central control panel. For portable layouts this can greatly reduce the number of inter-board connections- only the DCC signal and any accessory power supplies must cross baseboard joins. 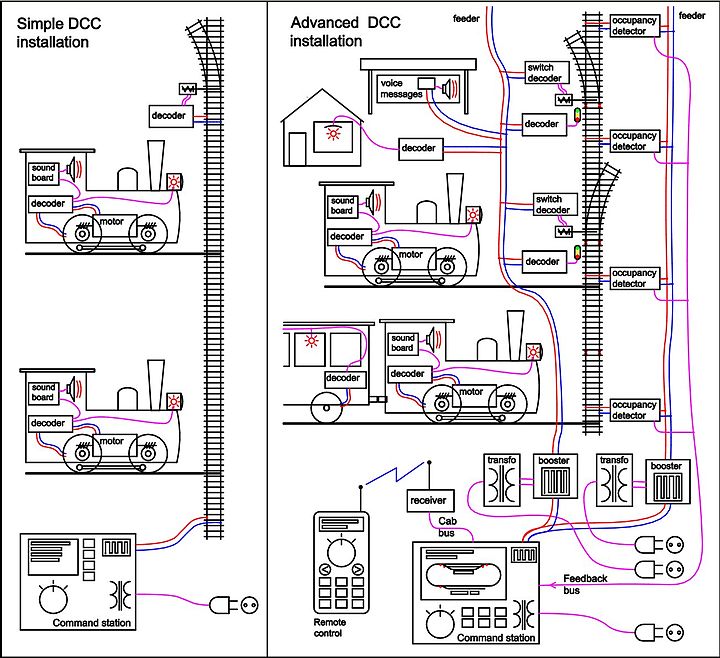 In Europe, Selectrix is an open NEM standard, but the Märklin-Motorola system is proprietary and used only in Märklin products. From the U.S., the Rail-Lynx system provides power with a fixed voltage to the rails while commands are sent digitally using infrared light. Other systems include the Digital Command System and Trainmaster Command Control.