Historically informed performance (also referred to as period performance, authentic performance, or (HIP)) is an approach in the performance of music and theater. Within this approach, the performance adheres to state-of-the-art knowledge of the aesthetic criteria of the period in which the music or theatre work was conceived. Whenever this knowledge conflicts with current aesthetic criteria, the option of re-training the listener/viewer, as opposed to adapting the work, is normally followed. Music is usually played on instruments corresponding to the period of the piece being played, such as period instruments for early music. Historical treatises, as well as additional historical evidence, are used to gain insight into the performance practice (the stylistic and technical aspects of performance) of a historic era. Corresponding types of acting and scenery are deployed. Historically informed performance has originated in the performance of Medieval, Renaissance, and Baroque music, but has come to encompass music from the Classical and Romantic eras as well. Quite recently, the phenomenon has begun to affect the theatrical stage, for instance in the production of Baroque opera.

The gradual and still ongoing historical evolution in the construction of instruments and in the training of musicians, as part of the evolution of aesthetic sense, has produced a corresponding evolution in sounds and styles. 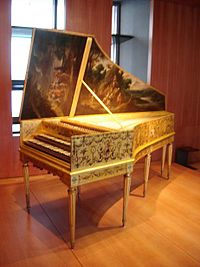 Among keyboard instruments, the most dramatic disappearance was that of the harpsichord, which gradually went out of style during the second half of the 18th century. The fortepiano became more popular by such a degree that harpsichords were destroyed; indeed, the Paris Conservatory is notorious for having used harpsichords for firewood during the French Revolution and Napoleonic times.[1] Composers such as François Couperin, Girolamo Frescobaldi, and Johann Sebastian Bach wrote for the harpsichord, clavichord, and organ, or sometimes for a generic "keyboard" (German Klavier), but not for the fortepiano, which was invented around 1700, but only widely adopted at about 1765.[citation needed]

The lute was one of the most relevant instrument during the Renaissance and Baroque eras.[citation needed]

A vast quantity of music for viols, for both ensemble and solo performance, was written by composers of the Renaissance and Baroque eras, including Diego Ortiz, Claudio Monteverdi, William Byrd, William Lawes, Henry Purcell, Monsieur de Sainte-Colombe, J.S. Bach, Georg Philipp Telemann, Marin Marais, Antoine Forqueray, and Carl Frederick Abel. However, viols were largely abandoned by the end of the 18th century, having been overtaken by the violin family.

Many composers wrote complex polyphonic part music (early chamber music) for viol consort, an ensemble of differently sized viols (typically held vertically) with a varying number of viols in it.

From largest to smallest, the viol family consists of:

Among the foremost modern players of the viols are Paolo Pandolfo, Wieland Kuijken, Jordi Savall, John Hsu, Vittorio Ghielmi, and Guido Balestracci. There are many modern viol consorts.

Recorders in multiple sizes (contra-bass, bass, tenor, alto, soprano, the sopranino, and the even smaller kleine sopranino or garklein) are often played today in consorts of mixed size. Handel and Telemann, among others, wrote solo works for the recorder. Arnold Dolmetsch did much to revive the recorder as a serious concert instrument, reconstructing a "consort of recorders (descant, treble, tenor and bass) all at low pitch and based on historical originals."[2] For a number of important modern exponents of the recorder, see Recorder player.

Instruments that have undergone reconsideration

From the heavy rigging of the early-to-mid-19th century, the tendency shifted to using lighter strings for an easier playing technique and more soloistic brilliance. Since 1900 the average string tension has been lighter than in most Baroque traditions except for 18th century France, but the longer strings and the more compact material (including, in our days, steel E strings) has led to a more brilliant and short-range penetrating tone with a greater acoustical emphasis on the even overtones.

The flute of the 18th century was typically made of wood rather than metal.

Early brass instruments did not incorporate keys or valves until the late 18th century.

The human voice is a biological given, but can be trained in different ways. For example, singers in historically informed performances may aim at a less loud tone, with less vibrato and different use of dynamics, to match the use of different accompanying instruments.[citation needed] A few of the singers who have contributed to the historically informed performance movement are Emma Kirkby, Julianne Baird, Nigel Rogers, and David Thomas.

Compositions intended to be sung by castrati present a problem. The 1994 movie Farinelli: Il Castrato, about an 18th-century castrato, used digital effects to create the voice by mixing the sound of a countertenor with a soprano singer.

Historic pictures,[3] layout sketches and sources are giving information about the layout of singers and instruments. Three main layouts are documented:

Johann Mattheson: "The singers must stand alltime in front".[4]

Some familiar difficult items are as follows:

Some information about how music sounded in the past can be obtained from contemporary mechanical instruments.

The baroque oboist Bruce Haynes has extensively investigated surviving wind instruments and even documented a case of violinists having to retune by a minor third to play at neighboring churches.[7][page needed]

Generally acknowledged motivations for historically informed performance can be characterized as follows.

While normally accepted in literature (early poetry or prose is not re-written in modern language), in the performing arts historical respondence is of difficult implementation, both practically (how do we do it?) and conceptually (what meaning and function should be attributed to aesthetic elements that have evolved?). Prior to audio and video recording, no direct record of performing arts survives. Opinions on the implications of the aforementioned motivations and on how they should translate into criteria for historically informed performance vary.

At the beginning of the Early Music Revival, a common misconception was that historically informed performance implied lack of interpretation, such as vocally expressed by Virgil Fox: "There is current in our land (and several European countries) at this moment a kind of nitpicking worship of historic impotence. They say that Bach must not be interpreted and that he must have no emotion, that his notes speak for themselves. You want to know what that is? Pure unadulterated rot! Bach has the red blood. He has the communion with the people. He has all of this amazing spirit. And imagine that you could put all the music on one side of the agenda with his great interpretation and great feeling and put the greatest man of all right up on top of a dusty shelf underneath some glass case in a museum and say that he must not be interpreted! They're full of you-know-what and they're so untalented that they have to hide behind this thing because they couldn't get in the house of music any other way!"[cite this quote]

Even within such Early Music Revival, awareness of the pitfalls was clear. Though championing the need (for example in his editorship of Scarlatti sonatas) for a thoroughly-informed approach, not least in understanding as fully as possible a composer's actual wishes and intentions in their historical context, Ralph Kirkpatrick, pioneer in the harpsichord rediscovery, highlights the risk of using historical exoterism to hide technical incompetence: "too often historical authenticity can be used as a means of escape from any potentially disquieting observance of esthetic values, and from the assumption of any genuine artistic responsibility. The abdication of esthetic values and artistic responsibilities can confer a certain illusion of simplicity on what the passage of history has presented to us, bleached as white as bones on the sands of time."[8][page needed]

Yet, the acceptance of the concept is rapidly evolving. Today, performing an Early Baroque opera, such as Claudio Monteverdi's L'Orfeo without, at the very least, full historical awareness, would be inconceivable.

Classical recording producer Michael Sartorius writes: "While the debate on authenticity in baroque performance will continue, certain essential characteristics should be present, if the performance is to reflect the true baroque spirit."[9]