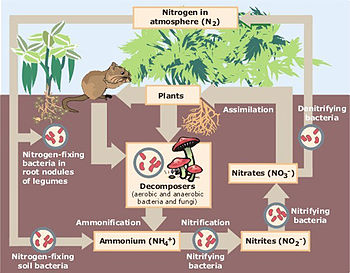 The oxidation of ammonia into nitrite is performed by two groups of organisms, ammonia-oxidizing bacteria (AOB) and ammonia-oxidizing archaea (AOA).[1]. AOB can be found among the betaproteobacteria and gammaproteobacteria.[2] Currently, only one AOA, Nitrosopumilus maritimus, has been isolated and described.[3][4] In soils the most studied AOB belong to the genera Nitrosomonas and Nitrosococcus. Although in soils ammonia oxidation occurs by both AOB and AOA, AOA dominate in both soils and marine environments,[5][6] suggesting that Crenarchaeota may be greater contributors to ammonia oxidation in these environments.

The second step (oxidation of nitrite into nitrate) is done (mainly) by bacteria of the genus Nitrobacter. Both steps are producing energy to be coupled to ATP synthesis. Nitrifying organisms are chemoautotrophs, and use carbon dioxide as their carbon source for growth. Some AOB possess the enzyme, urease, which catalyzes the conversion of the urea molecule to two ammonia molecules and one carbon dioxide molecule. Nitrosomonas europaea, as well as populations of soil-dwelling AOB, have been shown to assimilate the carbon dioxide released by the reaction to make biomass via the Calvin Cycle, and harvest energy by oxidizing ammonia (the other product of urease) to nitrite. This feature may explain enhanced growth of AOB in the presence of urea in acidic environments.[7]

Nitrification also plays an important role in the removal of nitrogen from municipal wastewater. The conventional removal is nitrification, followed by denitrification. The cost of this process resides mainly in aeration (bringing oxygen in the reactor) and the addition of an external carbon source (e.g., methanol) for the denitrification.

Nitrification can also occur in drinking water. In distribution systems where chloramines are used as the secondary disinfectant, the presence of free ammonia can act as a substrate for ammonia-oxidizing microorganisms. The associated reactions can lead to the depletion of the disinfectant residual in the system.[8]

In most environments, both organisms are ford together, yielding nitrate as the final product. However, it is possible to design systems in which nitrite is formed (the Sharon process).

Together with ammonification, nitrification forms a mineralization process that refers to the complete decomposition of organic material, with the release of available nitrogen compounds. This replenishes the nitrogen cycle.

Nitrification is a process of nitrogen compound oxidation (effectively, loss of electrons from the nitrogen atom to the oxygen atoms):

Nitrification in the marine environment

In the marine environment, nitrogen is often the limiting nutrient, so the nitrogen cycle in the ocean is of particular interest.[9][10] The nitrification step of the cycle is of particular interest in the ocean because it creates nitrate, the primary form of nitrogen responsible for “new” production. Furthermore, as the ocean becomes enriched in anthropogenic CO2, the resulting decrease in pH could lead to decreasing rates of nitrification. Nitrification could potentially become a “bottleneck” in the nitrogen cycle.[11]

Nitrification, as stated above, is formally a two-step process; in the first step ammonia is oxidized to nitrite, and in the second step nitrite is oxidized to nitrate. Different microbes are responsible for each step in the marine environment. Several groups of ammonia oxidizing bacteria (AOB) are known in the marine environment, including Nitrosomonas, Nitrospira, and Nitrosococcus. All contain the functional gene ammonia monooxygenase (AMO) which, as its name implies, is responsible for the oxidation of ammonia.[12] More recent metagenomic studies have revealed that some Crenarchaeote Archaea possess AMO. Crenarchaeote are abundant in the ocean and some species have a 200 times greater affinity for ammonia than AOB, leading researchers to challenge the previous belief that AOB are primarily responsible for nitrification in the ocean.[13] Furthermore, though nitrification is classically thought to be vertically separated from primary production because the oxidation of nitrogen by bacteria is inhibited by light, nitrification by AOA does not appear to be light inhibited, meaning that nitrification is occurring throughout the water column, challenging the classical definitions of “new” and “recycled” production.[14]

In the second step, nitrite is oxidized to nitrate. In the ocean, this step is not as well understood as the first, but the bacteria Nitrospina and Nitrobacter are known to carry out this step in the ocean.[15]