The Italian Sparrow (Passer italiae) is a passerine bird of the sparrow family Passeridae, found in Italy and other parts of the Mediterranean region. In appearance, it is intermediate between the House Sparrow, and the Spanish Sparrow, a species of the Mediterranean and Central Asia closely related to the House Sparrow. The Italian Sparrow occurs in northern Italy and neighbouring regions, with intermediates with the House Sparrow in a very narrow contact zone in the Alps, a slow gradation in appearance from the Italian to Spanish Sparrows across central and southern Italy, and more birds of intermediate appearance in Malta, Crete, and other parts of the Mediterranean. There has been much debate on the origins and taxonomic status of the Italian Sparrow, especially given its possible hybrid origin. Some have classified it as a subspecies of House Sparrow, a subspecies of the Spanish Sparrow, or as a distinct species, a treatment followed if only for convenience by authorities such as the Handbook of the Birds of the World. A DNA analysis by Glenn-Peter Sætre and colleagues published in 2011 indicated an origin of the Italian Sparrow through hybridisation between the Spanish and House Sparrows, and Sætre and colleagues argued that given its origins and the limited extent of hybridisation, the treatment as a distinct species was supported.

The Italian Sparrow is a small chunky bird, with grey and brown plumage. The sexes differ in their plumage pattern, and slightly in length.[1] The male has a head patterned like that of the Spanish Sparrow, with a chestnut crown, nape and sides of head, and white cheeks. The male's upperparts are bright chestnut, and its underparts are pale grey, lacking the black streaking of the Spanish Sparrow.[2] The male has a black patch on its throat and chest, known as a bib or badge. This patch, like much of the male's plumage is dull in fresh non-breeding plumage and is brightened by wear and preening.[3] The female is nearly identical to the female House Sparrow, but it differs from the female Spanish Sparrow in its lack of black streaks on the underparts.[2] Albinism is occasionally recorded.[4]

A DNA analysis by Jo Hermansen, Glenn-Peter Sætre, and a group of other scientists from Norway published in Molecular Ecology in 2011 indicates that the Italian Sparrow originated as a hybrid between House and Spanish Sparrows. It has mitochondrial DNA from both parent species. Additionally, it is now breeding beside the Spanish Sparrow without cross-breeding in areas where the species both occur.[10][17] Although it hybridises with the House Sparrow in a sparsely populated contact zone in the Alps, he contact zone is characterized by relatively abrupt changes in species-specific male plumage, suggesting that partial reproductive isolation based on plumage may also have developed between these two taxa.[17] As a genetically distinct group that is reproductively isolated from the parental species, it must be accounted a new species, according to Hermansen and colleagues.[10][17] 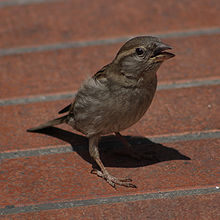 The Italian Sparrow is found in northern and central Italy, Corsica, and small parts of France, Switzerland, Austria, and Slovenia.[1] Its distribution was described by Italian zoologist Enrico Hillyer Giglioli in 1881 as professing "'Conservative opinions'; for it keeps strictly within our current political frontiers".[18] At the northernmost edge of its range in the southern Alps, there is a narrow hybrid zone about 20–30 km (12–20 mi) wide with House Sparrow.[19] In southern Italy, there is a gradual clinal trend with the Spanish Sparrow, with birds increasing in their similarity to the Spanish Sparrow in appearance and ecology further south, from around Naples to western Sicily, where birds resemble pure Spanish Sparrows.[1][13] However, this trend may be superficial,[20] and the Handbook of the Birds of the World recognises birds from Sicily and Crete as Italian Sparrows.[8]

The Italian Sparrow is associated with human habitations, inhabiting towns, cities, and agricultural areas. In most cities in Italy, it shares the urban environment with the Eurasian Tree Sparrow,[13][30][31] and in some parts of Naples, it is replaced entirely by this species.[32][33]

A fresco at Pompeii depicting an Italian Sparrow or a relative

The Italian Sparrow's behaviour is similar in many ways to that of the House Sparrow. It is a social bird, which feeds mostly on seeds and insects.[4][34]

It is mostly sedentary, but it wanders to some extent outside its breeding season. These wanderings are mostly local, but they may extend into southern France. Similarly, the House Sparrow sometimes occurs as a winter visitor in northern Italy.[37][38]