Coercivity
This article is about a property of magnetic fields. For other meanings, see Coercion (disambiguation).

A family of hysteresis loops for grain-oriented electrical steel (BR denotes remanence and HC is the coercivity).

In materials science, the coercivity, also called the coercive field or coercive force, of a ferromagnetic material is the intensity of the applied magnetic field required to reduce the magnetization of that material to zero after the magnetization of the sample has been driven to saturation. Thus coercivity measures the resistance of a ferromagnetic material to becoming demagnetized. Coercivity is usually measured in oersted or ampere/meter units and is denoted HC. It can be measured using a B-H Analyzer or magnetometer.

Materials with low coercivity are said to be magnetically soft. They are used in transformer and inductor cores, recording heads. microwave devices, and magnetic shielding. 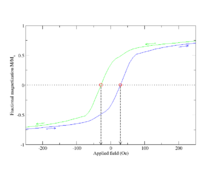 The magnitude of the coercive field of a ferromagnet can be determined via simple graphical analysis of the hysteresis loop.

Typically the coercivity of a magnetic material is determined by measurement of the hysteresis loop,[1] also called the magnetization curve, as illustrated in the figure. The apparatus used to acquire the data is typically a vibrating-sample or alternating-gradient magnetometer. The applied field where the data line crosses zero is the coercivity. If an antiferromagnet is present in the sample, the coercivities measured in increasing and decreasing fields may be unequal as a result of the exchange bias effect.

The coercivity of a material depends on the time scale over which a magnetization curve is measured. The magnetization of a material measured at an applied reversed field which is nominally smaller than the coercivity may, over a long time scale, slowly relax to zero. Relaxation occurs when reversal of magnetization by domain wall motion is thermally activated and is dominated by magnetic viscosity.[3] The increasing value of coercivity at high frequencies is a serious obstacle to the increase of data rates in high-bandwidth magnetic recording, compounded by the fact that increased storage density typically requires a higher coercivity in the media.[citation needed]

As with any hysteretic process, the area inside the magnetization curve during one cycle represents the work that is performed on the material by the external field in reversing the magnetization,[1] and is dissipated as heat. Common dissipative processes in magnetic materials include magnetostriction and domain wall motion. The coercivity is a measure of the degree of magnetic hysteresis and therefore characterizes the lossiness of soft magnetic materials for their common applications.

The squareness (saturation remanence divided by saturation magnetization) and coercivity are figures of merit for hard magnets although energy product (saturation magnetization times coercivity) is most commonly quoted. The 1980s saw the development of rare earth magnets with high energy products but undesirably low Curie temperatures. Since the 1990s new exchange spring hard magnets with high coercivities have been developed.[5]