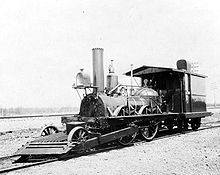 Leading truck and pilot on the John Bull 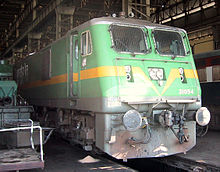 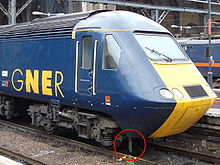 In railroading, the pilot is the device mounted at the front of a locomotive to deflect obstacles from the track that might otherwise derail the train. In some countries it is also called cowcatcher or cattle catcher.

In addition to the pilot, small metal bars called life-guards, rail guards or (UK) guard irons are provided immediately in front of the wheels. They knock away smaller obstacles lying directly on the running surface of the railhead. Historically fenced-off railway systems in Europe relied exclusively on these devices and forwent the use of pilots, but this design is rarely used in modern systems.

Trams use in place of the pilot a device called a fender. Objects lying on the tram track get hit by a sensor bracket, which triggers the lowering of a basket shaped device to the ground preventing overrunning of the obstacles by dragging it along the road surface in front of the wheels.

In snowy areas the pilot has also the function of a snowplow.

The pilot was invented by Charles Babbage in the 19th century, during his period of working for the Liverpool and Manchester Railway.[1] However, Babbage's invention was not built, and it is uncertain whether later users were aware of Babbage's idea.

On a mainline locomotive, the pilot has to successfully deflect an obstacle hit at speed; the ideal is to push it upwards and sideways out of the way. The locomotive should not lift on impact or the train will follow, and the ideal is for a fairly smooth structure so that the locomotive will not get caught and derailed.

The typical shape is a blunt wedge that is shallowly V-shaped in plan. In the later days of steam locomotives, the front coupler was designed to swing out of the way also, so it could not get caught up; this was called a drop coupler pilot.

Early on, pilots were normally fabricated of bars mounted on a frame; later on, sheet metal pilots were often used for their additional smoothness, and some cast steel pilots were employed for their mass and smooth shape. Early diesel locomotives followed the same plan.

Most modern European rail vehicles must have pilots with snowplow function and rail guards by law. The required strength of the system is 30 kN (3,059 kp) in the middle of the track and 50 kN (5,099 kp) near the rails.[2]

Modern US diesel locomotives have flatter, less wedge shaped pilots; this is because a diesel locomotive has the cab near the front, and the crew are vulnerable to impact from obstacles pushed up by the pilot. 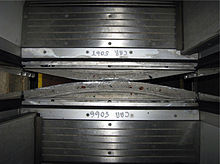