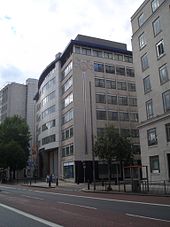 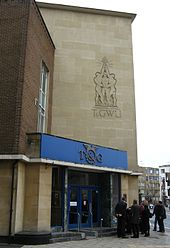 The Transport and General Workers' Union, also known as the TGWU and the T&G, was one of the largest general trade unions in the United Kingdom and Ireland - where it was known as the Amalgamated Transport and General Workers' Union (ATGWU) - with 900,000 members (and was once the largest trade union in the world). It was founded in 1922, and its final general secretary was Tony Woodley.

At the time of its creation in 1922, the TGWU was the largest and most ambitious amalgamation brought about within trade unionism. Its structure combined regional organisation, based on Districts and Areas, with committee organisation by occupation, based on six broad Trade Groups. Trade groups were not closely linked to trades, but were elected by activists. Officials of the union were grouped by region, and could be asked to serve each or any trade group. The amalgamating unions were:

The Scottish Union of Dock Labourers and National Union of Dock, Riverside and General Workers in Great Britain and Ireland initially voted not to amalgamate, but joined before the end of 1922 nonetheless. The Greenock Sugar Porters' Union, Dundee Flax and Jute Stowers' Society, National Union of British Fishermen, and Belfast Breadservers' Association had also joined before the end of the year.

The Amalgamated Carters, Lurrymen and Motormen's Union merged with the Transport and General Workers' Union in 1922. Until its members were fully integrated in 1968, the union formed the North of England Commercial Section within the TGWU, retaining a great deal of autonomy and in many ways effectively functioning as a separate union, even being registered separately with the Registrar of Friendly Societies. It had previously had a similar arrangement with the United Vehicle Workers, another union that joined the merger forming the TGWU. Lurry was an old-fashioned spelling of lorry, and the spelling lorrymen is also seen in the union's documents.[citation needed]

Several specialised unions voted later to merge with the TGWU, including

The latest union to merge was the Community and Youth Workers' Union, whose members approved the merger on 13 September 2006, with the formal merger being approved by the Trades Union Certification Officer on 8 January 2007. For a full list, see the list of TGWU amalgamations.

The Transport and General Workers' Union spearheaded the campaign for the registration of Gangmasters in the UK, sponsoring an Act of Parliament which received the Royal Assent on 8 July 2004. [1]

During 2005 discussions started between the TGWU, Amicus and the GMB about the possibility of merging the three unions into one organisation with potentially 2.5 million members covering almost every sector of the economy. On 14 June 2006 the GMB Conference voted not to continue with discussions although the other two unions are proceeding, with delegates approving the proposed 'Instrument of Amalgamation' at a special conference on December 18, 2006. The ballot of both unions' membership during February and early March 2007, also approved the merger. The result of the ballot was announced on 2007-03-08: 86.4% of T&G members and 70.1% of Amicus members voted to support the merger, from a turnout of 27%. The press release announced that the resulting union had the working title "New Union" and the name would be decided by a ballot of the membership.[2] However, on 2007-04-02, The Times reported that the name Unite had been chosen.[3] and that full merger of rule books and governing bodies may soon follow the existing merger of personnel and finance departments [4]

Regions - particularly Region One which covered London, the South East and Eastern England, also had a tradition of donating to other causes, as did branch committees, which controlled a substantial proportion of membership income.