José María Teclo Morelos y Pavón (September 30, 1765, Valladolid, now Morelia, Michoacán – kjkDecember 22, 1815,[1] San Cristóbal Ecatepec, State of México) was a Mexican Roman Catholic priest and revolutionary rebel leader who led the Mexican War of Independence movement, assuming its leadership after the execution of Miguel Hidalgo y Costilla in 1811. He was later captured by the Spanish colonial authorities and executed for treason in 1815.

Monument of Morelos in Los Angeles.

Morelos was born into a poor Afro-mestizo family in the city of Valladolid, since renamed "Morelia" in his honor, in a house that is today a museum dedicated to his legacy. His father was José Manuel Morelos y Robles, a carpenter originally from Zindurio, a predominantly indigenous village a few kilometers west of Valladolid. His mother was Juana María Guadalupe Pérez Pavón, originally from San Juan Bautista de Apaseo, also near Valladolid. Valladolid was the seat of a bishop and of the government of the colonial Intendency of Michoacán. It was known as the "Garden of the Viceroyalty of New Spain" because of its prosperity.

Capture of Morelos on Texmeluca, Puebla, 5 of November 1815.

On September 15, 1810, Hidalgo y Costilla, the former leader of the College of San Nicolás, then the parish priest of Dolores, Guanajuato (since renamed Dolores Hidalgo in his honor), called for armed revolt after the Spanish colonial authorities discovered the Conspiracy of Querétaro. The other conspirators included Josefa Ortiz de Domínguez, Ignacio Allende and Juan Aldama. Hidalgo y Costilla and his followers rose in open revolt the following day. 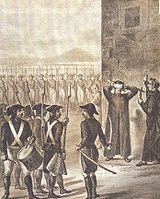 Execution by firing squad in Matamoros 1815.

After taking all the important cities of the Bajío region and being proclaimed captain general of Mexico in Celaya on September 21, Hidalgo y Costilla advanced as far as Guanajuato.

There on September 28, the rebels captured the Alhóndiga de Granaditas in battle, killing more than 700 Spaniards who had taken shelter there. Among the dead was the intendent of Guanajuato, Juan Antonio Riaño, an old friend of Hidalgo y Costilla.

The Mexican revolutionary army was excommunicated by the bishop of Michoacán, Manuel Abad y Queipo, another former friend of Hidalgo y Costilla. Hidalgo y Costilla and his army marched on to Valladolid, where the locals feared that the slaughter of Guanajuato would be repeated, prompting many people to abandon the region, particularly the rich and middle class society. However, Valladolid was taken peacefully on October 17, 1810.

In Tacámbaro Hidalgo y Costilla was proclaimed general, and Allende captain general. Hidalgo y Costilla ordered a rest for his troops in Indaparapeo, where a few minutes before their departure, Morelos, who had read about his excommunication and his triumphs, found him. Still serving as the parish priest of Cuarácuaro, Hidalgo y Costilla asked Morelos to join the army. Morelos was promoted as colonel of the revolution army, ordering him to raise troops in the south and capture Acapulco, to disrupt the commerce and trade with the Philippine Islands. 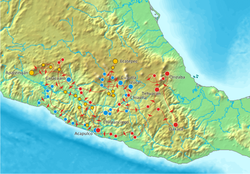 A map of the military campaigns of Morelos.

Morelos soon showed himself to be a talented strategist, and became one of the greatest revolutionary military commanders of the war. In his first nine months, he won 22 victories, annihilating the armies of three Spanish royalist leaders and dominating almost all of what is now the state of Guerrero. In December, he captured Acapulco for the first time, except for the fortress of San Diego. Spanish reinforcements forced him to raise the siege in January. By quick marches, he was able to capture most of the Spanish possessions on the Pacific coast of what are now Michoacán and Guerrero. On May 24, 1811 he occupied Chilpancingo and on May 26 he took Tixtla.

In his second campaign, Morelos divided his army into three groups. The most important engagement of this campaign was at Cuautla. On Christmas Eve 1811 the townspeople welcomed Morelos in Cuautla. The next year his forces were besieged by the Spanish army under general Félix María Calleja del Rey. On May 2, 1812, after 58 days, Morelos broke through the siege, and started his third campaign.

Major victories on this third campaign were at Citlala on June 8, 1812, Tehuacán on August 10, 1812, Orizaba, Oaxaca and Acapulco. Morelos arrived at Orizaba with 10,000 soldiers on October 28, 1812. The city was defended by 600 Spanish soldiers. Negotiation led to a surrender without bloodshed. He entered Oaxaca in triumph on November 25, 1812. Acapulco fell on April 12, 1813, forcing the Spanish army to take refuge in Fort Baltimore after.

The Congress of Chilpancingo 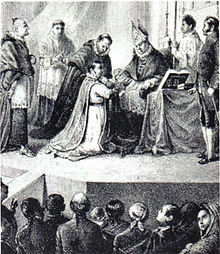 The degradation of Morelos, in a contemporary engraving.

In 1813, Morelos called the National Constituent Congress of Chilpancingo, composed of representatives of the provinces under his control, to consider a political and social program which he outlined in a document entitled "Sentimientos de la Nación" (Sentiments of the Nation). The Congress called itself the Congress of Anáhuac, referring poetically to the ancient Aztecs.

On September 13, 1813, the Congress, with Morelos present, endorsed the "Sentiments of the Nation". This document declared Mexican independence from Spain, established the Roman Catholic religion and created the legislative, executive and judicial branches of government. It declared respect for property and confiscated the productions of the Spanish colonial government. It abolished slavery and racial social distinctions in favor of the title "American" for all native-born individuals. Torture, monopolies and the system of tributes were also abolished Morelos was offered the title "Generalissimo" with the style of address "Your Highness", but he refused these and asked to be called "Siervo de la Nación" (Servant of the Nation). On November 6, 1813 the Congress declared independence.

After several military defeats, the Congress organized a meeting in Apatzingán, and on October 22 promulgated the "Decreto Constitucional para la Libertad de la América Mexicana" (Constitutional Decree for the Liberty of Mexican America). This established a weak executive and a powerful legislature, the opposite of what Morelos had called for. He nevertheless conceded that it was the best he could hope for under the circumstances.

Shortly thereafter, Morelos began his fourth military campaign, a series of disasters beginning at Valladolid in late 1813. While escorting the new insurgent Congress in November 1815, he was defeated in Tezmalaca. He was taken prisoner and brought to Mexico City in chains. He was tried and executed for treason. José María Morelos y Pavón was executed by firing squad on December 22, 1815 in San Cristóbal Ecatepec, north of Mexico City in order that his execution not provoke a dangerous public reaction . He was later judged to be reconciled to the church, lifting his excommunication, as he was seen praying on his way to his execution (Marron, cited below). After his death, his lieutenant, Vicente Guerrero, continued the war of independence. 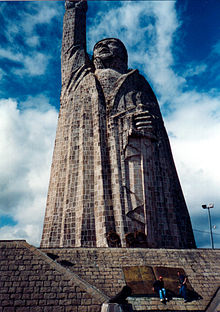 A statue of Morelos at Janitzio, Michoacán.

Morelos is considered a national hero of Mexico. In his honor, the state of Morelos and city of Morelia are named after him. Morelos' legacy has been portrayed on the 50 peso note since 1997; 1 peso coins during the 1940s, 1970s and 1980s. Also the Estadio Morelos in Morelia, Puerto Morelos in the state of Quintana Roo, the Morelos Station in Mexico's City Metro System, Ecatepec the city in Mexico State where he was executed and the Morelos Satellite from the Communications company Satmex are named after him

Gustavo Watson Marron, director of the historical archive of the archdiocese, cited in El Universal, 31 August 2009