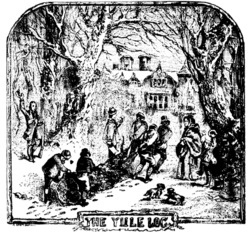 An illustration of people collecting a yule log from Chambers Book of Days (1832) p. 736

A Yule log is a large and extremely hard log which is burned in the hearth as a part of traditional Yule or Christmas celebrations in several European cultures. It can be a part of the Winter Solstice festival or the Twelve Days of Christmas, Christmas Eve, Christmas Day, or Twelfth Night.

The expression "Yule log" has also come to refer to log-shaped Christmas cakes, also known as "chocolate logs" or "Bûche de Noël". The Yule log is related to other Christmas and Yuletide traditions such as the Ashen faggot.[1]

The term "Yule log" is not the only term used to refer to the custom. In the north-east of England it was commonly called a "Yule Clog",[2] and in the country's Midlands and West Country, the term "Yule Block" was also used.[2] In the county of Lincolnshire, the term "Gule Block" was found, and in Cornwall, the term "Stock of the Mock" was as well.[2] In other parts of the British Isles, different terms were used, for instance in Wales, the log was often referred to as Y Bloccyn Gwylian, meaning "the Festival Block",[2] whilst in Scotland, Yeel Carline (meaning "the Christmas Old Wife") was used, and in Ireland, the term, Bloc na Nollaig, which meant "the Christmas Block", was used.[2] The Yule log was originally an entire tree, that was carefully chosen and brought into the house with great ceremony with the purpose being to provide maximum warmth and endurance. In some European traditions, the largest end of the log would be placed into the fire hearth while the rest of the tree stuck out into the room. While references are anecdotal, it seems to be a tradition that morphed into early European Christian tradition of the Twelve Days of Christmas. Within 20th century Europe and North America was predominantly a reference to the burning of the largest log possible at or around Christmas.

In Germany, the log is referred to as Christklotz, Christbrand or Weihnachtsscheit ("Christ-log" or "Christmas-log"). Kindled on Christmas Eve, the log in German tradition functioned as a lightning charm.[citation needed]

The Yule log has frequently been associated with having its origins in the historical Germanic paganism which was practiced across northern Europe prior to Christianisation. One of the first people to do so was the English historian Henry Bourne, who, writing in the 1720s, described the practice occurring in the Tyne valley. Bourne theorised that the practice derives from customs in 6th to 7th century Anglo-Saxon paganism.[2]

Robert Chambers, in his 1832 work, Book of Days notes that "two popular observances belonging to Christmas are more especially derived from the worship of our pagan ancestors—the hanging up of the mistletoe and the burning of the Yule log." James George Frazer in his work on anthropology, The Golden Bough (p. 736) holds that "the ancient fire-festival of the winter solstice appears to survive" in the Yule log custom. Frazer records traditions from England, France, among the South Slavs, in Central Germany (Meiningen) and western Switzerland (the Bernese Jura).

However, some historians have disagreed with this claim, for instance the Swedish folklorist Carl Wilhelm von Sydow[3] attacked Frazer's theories, claiming that the Yule log had never had any religious significance, and was instead simply a festive decoration with practical uses.[2]

Because there are no accounts of the custom in Great Britain prior to the 17th century, some historians and folklorists have theorised that it was not an ancient British custom but was in fact imported into Britain from continental Europe in the early modern period, possibly from Flanders in Belgium, where the tradition thrived in this period.[2]

The first mention of the Yule log in Britain is a written account by the clergyman Robert Herrick, from the 1620s or 1630s. Herrick called the tradition a "Christmas log" and said that it was brought into the farmhouse by a group of males, who were then rewarded with free beer from the farmer's wife. Herrick claimed that the fire used to burn the log was always started with a remnant from the log that had been burned in the previous year's festivities. He also said that the log's role was primarily one of bringing prosperity and protection from evil - by keeping the remnant of the log all the year long the protection was said to remain across the year.[2]

The Yule log was not only seen as a magical protective amulet in traditional British rural culture. There are many reports of rivalries occurring between members of a community as to who had the largest log.[2]

The traditions of the Yule log died out in Britain in the latter 19th and early 20th century because of, according to historian Ronald Hutton, "the reduction in farm labour and the disappearance of the old-fashioned open hearths",[2] however the Bûche de Noël dessert has become a Christmas tradition in the UK, as in many French speaking places.

In France and Wallonia, and thence also in Quebec and in Lebanon, the Bûche de Noël ("christmas log") is a traditional dessert, in origin a facsimile of the actual yule log. The tradition of the yule log was discontinued as large fireplaces became an increasingly rarer feature of the average living room. The dessert is usually in the form of a large rectangular yellow cake spread with frosting and rolled up into a cylinder - one end is then lopped off and stood on end to indicate the rings of the "log." It is not known when the dessert, or its name, originated. It is known to have existed by 1945, and apparently, a tradition of jam rolls served at Christmas is attested for Poitou-Charentes since the 19th century.[citation needed]

In the most traditional of the Catalan homes, the old custom of "fer cagar el tió" is still followed for Christmas. A log is wrapped with a blanket several days in advance of Christmas and is "fed" grass. On Christmas Eve the log is repeatedly hit in order to make the log go "cagar." The blanket is then removed to reveal the gifts that have been "expelled" by the log.

In Tuscany, there is a Festa del Ceppo ("festival of the log").

In Croatia, Christmas Eve is called Badnjak (Christmas Eve Day: Badnji dan, Christmas Eve night: Badnja večer), after the traditional log that is cut on Christmas Eve and lit in the hearth of the home in the evening. In villages, the father of the family cuts down a piece of wood from a tree at dawn, reciting the Lord's Prayer and making the sign of the cross, invoking God to bless the family. In the cities, logs are usually bought instead of cut down. The log is brought to the home, but left inside until the evening, where it is brought in and placed in the hearth or fireplace. Holy water is then poured on the log, usually accompanied by the Apostle's Creed. It is then lit and the father praises Jesus and welcomes Christmas Eve.

The badnjak is a central feature in the traditional Serbian Christmas celebration. It is the log that a family solemnly brings into the house and places on the fire in the evening of Christmas Eve. The tree used for the badnjak, preferably a young and strait oak, is ceremoniously felled in the early morning of Christmas Eve. Traditionally the head of the family was sent dressed in his best clothes to cut down an oak, elm, or pear tree. That tree is used as the badnjak. A prayer for forgiveness was necessary before it could be chopped down with three strikes with axe, and carried on one's right shoulder as it is not allowed to touch the ground. The burning of the log is accompanied by prayers to God so that the coming year may bring much happiness, love, luck, riches, and food. It would burn on through Christmas Day, whether rekindled or kept burning from the Eve. The first person to visit the family on that day should strike the burning badnjak with a poker or a branch to make sparks fly from it, at the same time uttering a wish that the happiness, prosperity, health, and joy of the family be as abundant as the sparks. The ideal environment to fully carry out these customs is the traditional multi-generation country household. Since most Serbs today live in towns and cities, the badnjak is symbolically represented by several leaved oak twigs that can be bought at marketplaces or received in churches. The origin of the badnjak is explained by events surrounding the Nativity of Jesus Christ. Scholars, however, regard these customs as practices inherited from the old Slavic religion.

In Bulgaria, it is an important part of Christmas Eve preparations. Traditionally а young man of the family was sent dressed in his best clothes to cut down an oak, elm, or pear tree. That tree is used as the Budnik (bg:Бъдник). A prayer for forgiveness was necessary before it could be chopped down and carried on one's right shoulder as it is not allowed to touch the ground. An indication of the importance of the ritual is that Christmas Eve translates to Budnik or Budnik Eve (bg:Бъдни вечер) in Bulgaria. In some regions, upon the man's return he asks "Do you glorify the Young God?" three times and receive a positive answer "We glorify Him, welcome". After that a hole is bored in one end of the badnik and filled with Chrism made of wine, cooking oil, and incense. The hole is plugged, and that end of the log is wrapped with a white linen cloth before the badnik is festively burned on the hearth.[5] The log is considered to possess special healing powers and the ritual includes songs and uttering of wishes as the log is lit much like the Serbian ritual described above. The log has to burn all night and it is believed that its warmth and light symbolise the coming of Christ as well as providing a warm welcome to Virgin Mary and the family's ancestors who are believed to be guests at the table according to traditions in some regions. Sometimes the fire is put off using wine in the morning. Remains of the log are cherished and sometimes used to make personal crosses, also to make a plough and ashes are simply spread over a field or vineyard to induce better yields.