Military of Serbia and Montenegro

Military of Serbia and Montenegro

Preceding the VSCG was the Military of Yugoslavia (Serbian: Vojska Jugoslavije, VJ; Војска Југославије, ВЈ) from the remnants of the Yugoslav People's Army (JNA), the military of SFR Yugoslavia. The state, then named "Federal Republic of Yugoslavia", participated in the Yugoslav Wars, but with limited direct intervention of its own armed forces. Following the end of the Wars and the constitutional reforms of 2003 by which the state was renamed "Serbia and Montenegro", the military accordingly changed its name to "Military of Serbia and Montenegro". The military was heavily involved in combating the separatist Kosovo Liberation Army and Liberation Army of Preševo, Medveđa and Bujanovac during the Kosovo War and Preševo Valley conflict, and also engaged NATO airplanes during the 1999 NATO bombing of the Federal Republic of Yugoslavia.

Upon the dissolution of Serbia and Montenegro with the Montenegrin independence referendum of 2006, a fraction of the joint military was given to Montenegro, with the bulk of the force remaining in Serbia.

Official seal of the Military of Yugoslavia, prior to its renaming

The Federal Yugoslav Navy was based in the Kotor and was largely made of vessels inherited from the SFR Yugoslav Navy. During NATO's Operation Allied Force in 1999, the Navy took control over civilian shipping around Kotor, despite NATO's blockade[3] and in several actions the warships fire at NATO aircraft on their way to strike Serbian targets.[4] The Navy claimed to have shot down three UAVs over Boka Kotorska.[5] The images of the remains of one of them were displayed online.[6]

Statistics prior to split 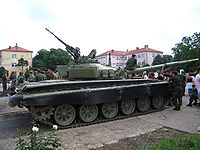 Civilians fit for military service were estimated at about 4,888,595 (2001 est.). The 2002 estimate for military expenditures as percent of GDP was 4.6%. Significant reforms were undertaken in the military of Serbia and Montenegro. In 2002 the Serbo-Montenegrin Military force numbered around 100,000 soldiers, supported by some 450,000 reserves. The 100,000 strong Army had 1,500 main battle tanks and 687 armed infantry vehicles. The Navy had 3,500 personnel, of whom 900 were marines. The entire Navy was composed totally out of 6 submarines, 3 frigates, 41 patrol & coastal ships and 14 "other" vessels. The Air force 14,000 personnel had 192 combat aircraft and 72 armed helicopters.

Last chief of staff of the Military of Serbia and Montenegro was general Ljubiša Jokić.