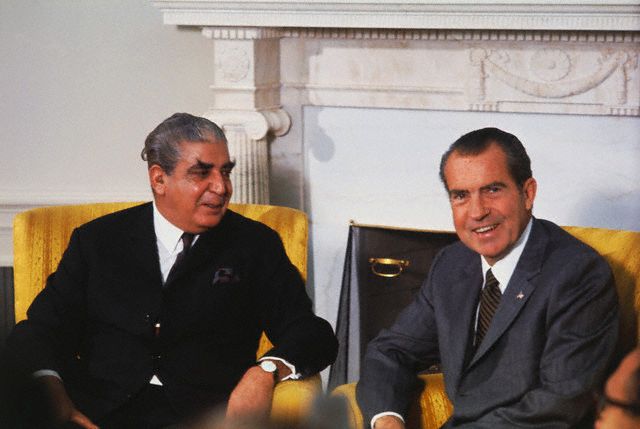 Yahya Khan was born in [ [http://www.dawn.com/weekly/ayaz/20050930.htm The Nazimate of Chakwal September 30, 2005 by Ayaz Amir DAWN ] ] [Current Biography (1986) By H.W. Wilson Company H. W. Wilson Co.] in 1917 to an ethnic family of Persian descent who could trace their military links to the time of . [Musharraf Contends With The Pashtun Element in the Pakistani Army [http://www.jamestown.org/terrorism/news/article.php?articleid=2370188] ]

Nadir Shah was killed in a revolution and some members of his family escaped from Iran to Northern Pakistan area. The story is that after Qizilbash family escaped bare handed the family jewels and little treasure they carried were enough to buy them villages and maintain royal life style. Qizilbash family entered military profession and produced many high level government officials and generalsFact|date=December 2007.

He attended and finished first in his class. He then joined the , and served in as an officer in the . He served in , , and .

Though culturally Pashtun, Yahya was a "Qizilbash" commissioned from "Dehra Dun" on 15 July 1939. An infantry officer from the 4/10 , Yahya saw action during WW II in North Africa where he was captured by the Axis Forces in June 1942 and interned in a prisoner of war camp in from where he escaped in the third attempt.

In 1947 he was instrumental in not letting the Indian officers shift books from the famous library of the "British Indian Staff College" at , where Yahya was posted as the only Muslim instructor at the time of partition of India.

Yahya became a brigadier at the age of 34 and commanded the 106 Infantry Brigade, which was deployed on the ceasefire line in Kashmir in 1951-52. Later Yahya, as Deputy Chief of General Staff, was selected to head the army’s planning board set up by Ayub to modernise the Pakistan Army in 1954-57. Yahya also performed the duties of Chief of General Staff from 1958 to 1962 from where he went on to command an infantry division from 1962 to 1965.

Upon the formation of Pakistan, Khan helped set up an officer's school in , and commanded an infantry division during the . Immediately after the 1965 war Major General Yahya Khan who had commanded the 7th Division in "Operation Grand Slam" was promoted to the rank of Lieutenant General, appointed Deputy Army Commander in Chief and Commander in Chief designate in March 1966.

As Chief of Army Staff (COAS)

Yahya energetically started reorganising the Pakistan Army in 1965. The post 1965 situation saw major organisational as well as technical changes in the Pakistan Army. Till 1965 it was thought that divisions could function effectively while getting orders directly from the army’s GHQ. This idea failed miserably in the 1965 war and the need to have intermediate corps headquarters in between the GHQ and the fighting combat divisions was recognised as a foremost operational necessity after the 1965 war. In 1965 war the Pakistan Army had only one corps headquarter (i.e. the 1st Corps Headquarters).

Soon after the war had started the U.S. had imposed an embargo on military aid on both and . This embargo did not affect the Indian Army but produced major changes in the Pakistan Army’s technical composition. US Secretary of State well summed it up when he said, "Well if you are going to fight, go ahead and fight, but we’re not going to pay for it". [ Dennis Kux, India and the United States : Estranged Democracies (Washington, DC: National Defense University Press, 1992), 239. ]

Pakistan now turned to for military aid and the Chinese tank started replacing the US M-47/48 tanks as the Pakistan Army’s MBT (Main Battle Tank) from 1966. 80 tanks, the first batch of s, a low-grade version of the Russian series were delivered to Pakistan in 1965-66. The first batch was displayed in the Joint Services Day Parade on 23 March 1966. The 1965 War had proved that Pakistan Army’s tank infantry ratio was lopsided and more infantry was required. Three more infantry divisions (9, 16 and 17 Divisions) largely equipped with Chinese equipment and popularly referred to by the rank and file as "The China Divisions" were raised by the beginning of 1968. Two more corps headquarters i.e. 2nd Corps Headquarters (Jhelum-Ravi Corridor) and 4th Corps Headquarters (Ravi-Sutlej Corridor) were raised.

In the 1965 War India had not attacked East Pakistan which was defended by a weak two-infantry brigade division (14 Division) without any tank support. Yahya correctly appreciated that the geographical as well as operational situation demanded an entirely independent command set up in East Pakistan. 14 Division’s infantry strength was increased and a new tank regiment was raised and stationed in . A new Corps Headquarters was raised in East Pakistan and was designated as Headquarters Eastern Command. It was realised by the Pakistani GHQ that the next war would be different and East Pakistan badly required a new command set up.

was for most of the 1960s, but by the end of the decade, popular resentment had boiled over against him. Pakistan had fallen into a state of disarray, and he handed over power to Yahya Khan, who immediately imposed . Once Ayub handed over power to Yahya Khan on 25 March 1969 Yahya inherited a two-decade constitutional problem of inter-provincial ethnic rivalry between the Punjabi-- dominated province and the ethnically Bengali Muslim province. In addition Yahya also inherited an 11 year old problem of transforming an essentially one man ruled country to a democratic country, which was the ideological basis of the anti-Ayub movement of 1968-69. Herein lies the key to Yahya’s dilemma. As an Army Chief Yahya had all the capabilities, qualifications and potential. But Yahya inherited an extremely complex problem and was forced to perform the multiple roles of "caretaker" head of the country, "drafter" of a provisional constitution, resolving the "One Unit question", satisfying the frustrations and the sense of exploitation and discrimination successively created in the "East Wing" by a series of government policies since 1948. All these were complex problems and the seeds of Pakistan Army’s defeat and humiliation in December 1971 lay in the fact that Yahya Khan blundered unwittingly into the thankless task of fixing the problems of Pakistan’s political and administrative system which had been accumulating for 20 years and had their actual origins in the pre-1947 British policies towards the Bengali Muslims.

The American author Ziring observed that, "Yahya Khan has been widely portrayed as a ruthless uncompromising insensitive and grossly inept leader…While Yahya cannot escape responsibility for these tragic events, it is also on record that he did not act alone…All the major actors of the period were creatures of a historic legacy and a psycho-political milieu which did not lend itself to accommodation and compromise, to bargaining and a reasonable settlement. Nurtured on conspiracy theories, they were all conditioned to act in a manner that neglected agreeable solutions and promoted violent judgements”." [Lawrence Ziring: Pakistan in the twentieth century: a political history. Karachi, Oxford, New York, Delhi: Oxford University Press. 1997. 648 pp. ISBN 0-19-577815-2]

Yahya Khan attempted to solve Pakistan’s constitutional and inter-provincial/regional rivalry problems once he took over power from in March 1969. The tragedy of the whole affair was the fact that all actions that Yahya took, although correct in principle, were too late in timing, and served only to further intensify the political polarisation between the East and West wings.

*He dissolved the one unit restoring the pre-1955 provinces of West Pakistan
*Promised free direct, one man one vote, fair elections on adult franchise, a basic human right which had been denied to the Pakistani people since the pre-independence 1946 elections by political inefficiency, double play and intrigue, by civilian governments, from 1947 to 1958 and by Ayub’s one man rule from 1958 to 1969.

However dissolution of one unit did not lead to the positive results that it might have led to in case "One Unit" was dissolved earlier. Yahya also made an attempt to accommodate the East Pakistanis by abolishing the principle of parity, thereby hoping that greater share in the assembly would redress their wounded ethnic regional pride and ensure the integrity of Pakistan. Instead of satisfying the Bengalis it intensified their separatism, since they felt that the west wing had politically suppressed them since 1958. Thus the rise of anti West Wing sentiment in the East Wing.

The last days of united Pakistan

Yahya announced in his broadcast to the nation on 28 July 1969, his firm intention to redress Bengali grievances, the first major step in this direction being, the doubling of Bengali quota in the defence services. [Chaudhry, G.W., "The Last Days of United Pakistan", C. Hurst and Company, London, 1974] It may be noted that at this time there were just Seven infantry battalions of the East Pakistanis. Yahya’s announcement, although made with the noblest and most generous intentions in mind, was late by about twenty years. Yahya’s intention to raise more pure Bengali battalions was opposed by Major General Khadim Hussain Raja, the General Officer Commanding 14 Division in East Pakistan suggesting that the Bengalis were "too meek".

Within a year he had set up a framework for elections that were held in December of 1970. The results of the elections saw Pakistan split into its Eastern and Western halves. In , the (led by ) held almost all of the seats, but none in . In , the (led by ) won the lion's share of the seats, but none in East Pakistan. Though AL had 162 seats in the National Assembly against 88 of PPP,this led to a situation where one of the leaders of the two parties would have to give up power and allow the other to be . The situation also increased agitation, especially in East Pakistan as it became apparent that Sheikh Mujib was being denied of his legitimate claim to be the Prime Minister of Pakistan.

Yahya Khan could not reach a compromise, and instead cracked down on the political agitation in East Pakistan with a massive campaign of genocide named by "Operation Searchlight" which began on 25th March, 1971, targeting, among others, Muslims, Hindus, Bengali intellectuals, students and political activists. 3 million people in the east Pakistan were killed in the next few months along with an another 0.4 million women were raped by the Pakistan army officials within the cantonment area. Khan also arrested upon Bhutto's insistence and appointed Brigadier (later General) to preside over a special tribunal dealing with Mujib's case. Rahimuddin awarded Mujib the ,Fact|date=July 2008 and President Yahya put the verdict into abeyance. Yahya's crackdown, however, had led to a civil war within Pakistan, and eventually drew into what would extend into the . The end result was the establishment of as an independent republic, and this was to lead Khan to step down. After Pakistan was defeated in 1971, most of the blame was heaped on Yahya.

As President Khan helped to establish the communication channel between the and the , which would be used to set up the Nixon trip in 1972. [ [http://www.gwu.edu/~nsarchiv/NSAEBB/NSAEBB66/ Kissinger's Secret Trip to China ] ]

Later overwhelming public anger over Pakistan's defeat by and the division of Pakistan into two parts boiled into street demonstrations throughout , rumours of an impending coup d'état by younger army officers against the government of President Mohammed Agha Yahya Khan swept the country. Yahya became the highest-ranking casualty of the war: to forestall further unrest, on , he hastily surrendered his powers to , age 43, the ambitious leader of 's powerful People's Party.

On the same day that released and saw him off to , President , in a supreme irony, ordered the house arrest of his predecessor, Agha Mohammed Yahya Khan, the man who imprisoned Mujib in the first place. Both actions produced headlines round the world. But in Pakistan they were almost overshadowed by what Bhutto grandly called "the first steps toward an economic and social revolution."