The Institute of Physics (IOP) is a scientific charity devoted to increasing the practice, understanding and application of physics.[1] It has a worldwide membership of around 40,000.

It is the main professional body for physicists in the United Kingdom and the Republic of Ireland, and grants the professional qualification of Chartered Physicist (CPhys), as well as Chartered Engineer (CEng) as a nominated body of the Engineering Council.[2] In addition to this, the IOP provides services to its members including careers advice and professional development. As a part of its mission, the IOP works to engage the public with physics and runs the physics.org website, an online guide to physics, and a blog. The IOP is prominent in its work in policy and advocacy, lobbying for stronger support for physics in education, research and industry in the UK. [3]

The current chief executive of the IOP is Robert Kirby-Harris, and its current president is Sir Peter Knight.[5] 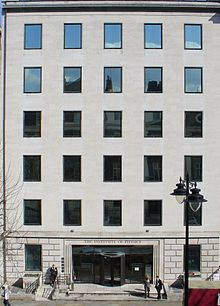 The Institute of Physics building in Portland Place, London

The Physical Society of London

The Physical Society was founded to provide a forum for the promotion and discussion of physical research. The Society was officially formed on 14 February 1874 with John Hall Gladstone as its first president.[7] From its beginning, the society held open meetings and demonstrations and published Proceedings of the Physical Society.[7] Its membership was broadly based, including eminent academics, schoolteachers and amateur scientists.[6]

The Institute of Physics and the Physical Society

In the early part of the 20th century, the profession of "physicist" emerged, partly as a result of the increased demand for scientists during World War I. In 1917, the Council of the Physical Society, along with the Faraday Society, the Optical Society, and the Roentgen Society, started to explore ways of improving the professional status of physicists.[6] To this end, in 1920, the Institute of Physics was created under special licence from the Board of Trade. Sir Richard Glazebrook was elected first President of the Institute.[8] As with the Physical Society, dissemination of knowledge was fundamental to the Institute, which began publication of the Journal of Scientific Instruments in 1922.[6] The annual Reports on Progress in Physics began in 1934[7] and is still published today.

In 1952, in line with its role in creating and promoting the profession of physicist, the Institute began the "Graduateship" course and examination, which ran until 1984 when the expansion of access to universities removed demand.[6]

The modern Institute of Physics is based at 76 Portland Place in London, while its publishing company has its headquarters in Bristol. In addition to its traditional roles of publishing and disseminating knowledge, the Institute is prominent in its work in policy and advocacy, lobbying for stronger support for physics in education, research and industry in the UK.

There are three grades of membership: Associate Member (AMInstP), Member (MInstP) and Fellow (FInstP). Qualification for AMInstP is normally by completion of an undergraduate degree accredited by the Institute – this covers almost all UK physics degrees.[11] An AMInstP can become an MInstP by gaining professional experience as a physicist and an FInstP by making "an outstanding contribution to the profession". MInstP and FInstP are the two corporate grades of membership, granting the right to vote in Institute elections. There are also student and affiliate grades of membership for those currently studying physics degrees and those who do not have accredited degrees (or equivalent experience).[12] The Institute grants academic dress to the various grades of membership.[13] Those who have passed the Institute's graduateeship examination are entitled to a violet damask Oxford burgon-shaped hood. Corporate members are entitled to wear a hood of Toronto shape in violet damask, lined in violet and faced on the cowl with crimson silk.[13]

The IOP accredits undergraduate degrees (BSc/BA and MSci/MPhys) in Physics in British and Irish universities.[11] At post-16 level, the IOP developed the 'Advancing Physics' A-level course, in conjunction with the OCR examining board, which is accredited by the Qualifications and Curriculum Authority. Advancing Physics was sold to Oxford University Press in January 2011.[14] The IOP also developed the Integrated Sciences degree, which is run at four universities in England.[15]

The Institute grants the professional title of Chartered Physicist (CPhys) as well as Chartered Engineer (CEng) as a nominated body of the Engineering Council. Until 1998 CPhys was granted automatically with MInstP, however since then it has become a separate qualification that is equal in stature to Chartered Engineer. In order to gain the CPhys qualification, a physicist must be appropriately qualified (an MSci or MPhys undergraduate master's degree is standard, although experience leading to an equivalent level can be counted), have had a minimum of two years of structured training and a minimum of two years responsible work experience, have demonstrated a commitment to continuing professional development, and have gained a number of competencies.

The IOP operates 13 national and regional branches in the United Kingdom and the Republic of Ireland. The subsidiary IOP Publishing has offices in the USA, China, Japan and Russia.

Presidents of the Institute of Physics

The Institute of Physics bestows several awards to recognise and reward outstanding achievements in physics, in research, teaching, outreach work and industry. The awards are presented at a high-profile ceremony held annually in central London. The awards include:[17]

IOP Publishing is a wholly owned subsidiary of the IOP with offices in Bristol, Philadelphia, Tokyo, Beijing and Washington DC. It won the Queen's Award for Export Achievement in 1990, 1995 and 2000 and publishes a large number of journals, websites and magazines, including:

Physics World is the membership magazine of the Institute of Physics. It was launched in 1988 by IOP Publishing Ltd and has established itself as one of the world's leading physics magazines. It, and its associated website, PhysicsWorld.com (formerly PhysicsWeb.org), provides news and information relating to the study and application of physics. The most significant content of the magazine is news, employment, and upcoming-events-related information. Several of these services were originally part of a web site called The Internet Pilot to Physics or 'TIPTOP'.